President Joe Biden on Thursday revealed his COVID-19 response plan, which re-envisions the federal government’s role in defeating the pandemic both domestically and internationally and promises to bring the “full resources of the federal government to bear.”
Jan 22, 2021 4:11 AM By: Justin Dennis 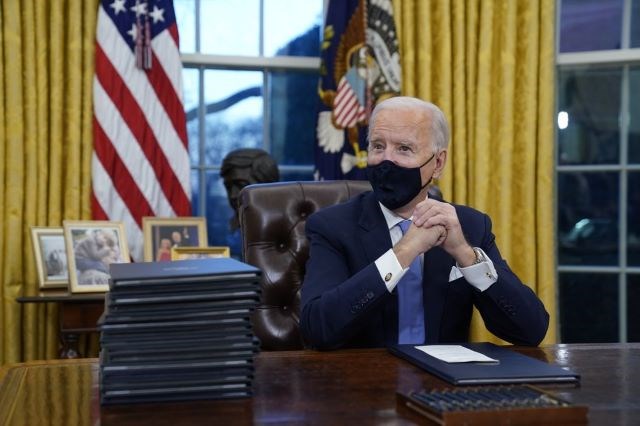 “For the past year, we couldn’t rely on the federal government to act with the purpose and the coordination we needed,” said Biden.

On the eve of his inauguration, he attended a memorial for the pandemic’s more than 400,000 U.S. victims. The death toll is expected to top 500,000 next month, he told reporters Thursday.

“Let me be clear: Things are going to get worse before they get better,” said Biden. “The memorial we held two nights ago will not be our last, unfortunately.

“We didn’t get into this mess overnight and it’s going to take months to turn this around. We will get through this. We will defeat this pandemic.

Restore trust with the American people

This includes a “whole-of-government response that puts science first,” maintaining the federal government as the chief source of factual information on the pandemic and addressing vaccine hesitancy and misinformation, Biden said.

Briefings would be led by CDC scientists and experts — as Thursday evening’s press briefing was led by Dr. Anthony Fauci, the country’s leading infectious disease expert — and data would be shared publicly.

“We will make sure scientists speak directly to you,” Biden said. “Vice President [Kamala] Harris and I and our entire team will also be transparent with you about the good news and the bad.

“We will level with you when we make a mistake.”

Fauci, during his later briefing appeared in good spirits, having been relegated to the background in the final weeks of President Donald Trump’s administration.

This promises better availability of the coronavirus vaccine by expanding manufacturing and purchasing powers, including the Defense Production Act, with a focus on the hardest-hit communities and hard-to-reach and high-risk populations.

Biden has pledged 100 million shots in the first 100 days of his presidency, a goal Fauci said Thursday was “quite reasonable.” That means 1 million shots per day, and the U.S. is already nearing that, the CDC reported this week.

Biden on Thursday said he’s ordered FEMA to put up 100 mass vaccination centers in the next month. The CDC is also expected to partner with pharmacies for public distribution of the vaccine at the local level.

Gov. Mike DeWine, in his letter sent earlier this week to the Biden administration, said vaccine supply was his chief concern. Previously, he’d discussed the need for federal assistance on large-scale vaccination centers.

“We’ll move heaven and Earth to get more people vaccinated for free and create more places to get them vaccinated,” Biden said Thursday.

“The mask can become a partisan issue, unfortunately, but it is a patriotic act,” he said, adding that without a widely available vaccine, “they’re the single-best thing we can do” to save lives.

“The brutal truth is it’s going to take months before we can get the majority of Americans vaccinated,” Biden said. “We’re going to take the steps necessary now to slow the spread of the disease as well.”

Biden on Thursday mandated masks on all interstate travel, including planes, trains and buses — an extension of a day-one order requiring masks while on federal property — and promised new measures, such as quarantine, for those flying in from other countries.

A new federal testing board is expected to focus on priority populations like health care and other essential workers, at-risk populations in group living settings and communities where coronavirus tests are still scarce.

“We are also going to take immediate steps to partner with governors, mayors … who are on the front lines of this fight,” the president said, adding that he’s directed FEMA to create a COVID-19 response liaison in similar fashion to the federal response to Hurricane Sandy in 2012, during President Barack Obama’s administration.

This includes fully reimbursing states for the costs of using National Guard members in states’ coronavirus response — in Ohio they helped administer COVID-19 tests in long-term care facilities — and for emergency supplies like PPE in schools.

This goal also looks to fill “urgent” supply chain gaps relating to the pandemic, expand manufacturing of testing devices, PPE, COVID-19 treatment drugs and the vaccine and create a domestic manufacturing base for any future pandemic.

This goal outlines the creation of national guidelines for reopening schools and financial support for childcare providers and their clientele families who are struggling.

Nearly all of Ohio’s school districts have committed to reopening by March 1, DeWine said earlier this week. All schools in Mahoning and Columbiana counties have pledged to reopen by then, local officials said this week.

Protect those most at risk and advance equity, including across racial, ethnic and rural/urban lines

The plan calls for establishment of the COVID-19 Health Equity Task Force, which will target the health inequities that make Black and brown Americans four times as likely to be hospitalized for COVID-19 than whites, and three times as likely to die from it, the president said Thursday.

This equity lens would cover access to “high quality” health care and PPE, tests, therapies and the coronavirus vaccine.

Immediately following his inauguration, Biden stopped the Trump administration’s withdrawal from the World Health Organization. This goal calls for the U.S. to strengthen and reform the WHO and also take a larger role on the world stage in pandemic response.

“I know these bold, practical steps will not come cheaply, but failing to do so will cost us so much more dearly,” Biden said at the close of his Thursday address. “We’re in a national emergency. It’s time we treat it like one, together, with a national plan as the United States of America.

“There are moments in history where more is asked of a particular generation … more is asked of us than another time,” he continued. “We are in that moment now. History is going to measure whether we’re up to the task.