High case numbers in some ZIP codes can be linked to outbreaks in congregate settings such as long-term care or correctional facilities.
Sep 10, 2020 4:11 AM By: Justin Dennis 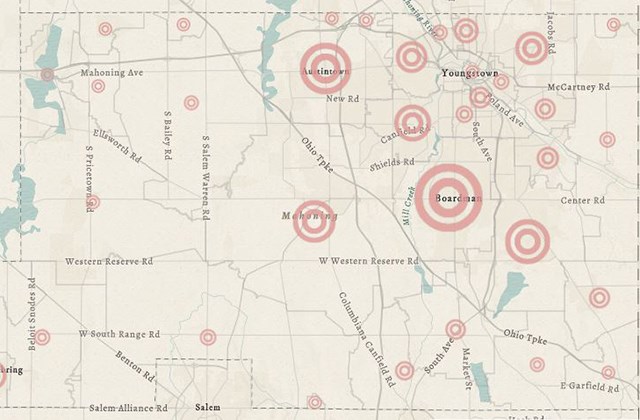 Mahoning County Public Health expects to update its COVID-19 dashboard at least twice a week. Health officials in Trumbull and Columbiana have said they plan to update ZIP code-level data on a regular basis, but have not scheduled those updates.

Mahoning Matters will continue to update the regional map below as new data become available.

Click on the pins to see how many COVID-19 cases have been reported to date in each community. If you can't find your ZIP code on the map, open the full-size version and select your ZIP code from the left-side menu.

The county, which has reported 2,913 cases to-date, tallied 599 new cases in July alone. Of those, 368 were reported in just five ZIP codes:

The five Mahoning County ZIP codes with the most total cases as of Aug. 1 are:

Outbreaks in congregate settings such as long-term care or correctional facilities may account for a large portion of a ZIP code’s reported cases.

As of Wednesday, Crandall Medical Center in the Sebring-area 44672 ZIP code reported 150 cumulative cases among residents and staff since April 15, according to the Ohio Department of Health. A total 152 total cases were reported in that ZIP code as of July, according to MCPH.

Windsor House at Omni Manor in the Youngstown-area 44509 ZIP code has reported a total 103 cases since April 15, according to ODH. A total 161 cases were reported in that ZIP code as of July, according to MCPH.

The five Trumbull County ZIP codes with the most cases as of Aug. 31 are:

Continuing Healthcare at the Ridge in the Mineral Ridge-area 44440 ZIP code has reported a cumulative 75 cases since April 15, according to ODH. A total of 91 cases have been reported in that ZIP code as of Aug. 31, according to TCCHD.

Windsor House at Liberty Health Care Center in the Youngstown-area 44505 ZIP code has reported a cumulative 58 cases since April 15, according to ODH. A total of 132 cases have been reported in that ZIP code as of Aug. 31, according to TCCHD.

Addison Healthcare Center in the Masury-area 44438 ZIP code has reported a cumulative 57 cases since April 15, according to ODH. A total of 99 total cases have been reported in that ZIP code as of Aug. 31, according to TCCHD.

At Trumbull Correctional Institution in the Leavittsburg-area 44430 ZIP code — where 121 total cases have been reported as of Aug. 31 — at least 86 inmates have recovered from COVID-19 as of Wednesday, according to the Ohio Department of Rehabilitation and Correction.

Two other inmates are considered actively infected and 42 are either in quarantine or isolation. Virus test results are pending for another 10 inmates.

The county has reported 1,878 cases to date, according to ODH. The county tallied 254 new cases between Aug. 4 and Sept. 4, according to CCHD. Of those, 199 were reported outside of congregate settings such as long-term care and correctional facilities.

The five Columbiana County ZIP codes with the most total cases as of Sept. 4 are:

Federal Correctional Institution Elkton in the Lisbon-area’s 44432 ZIP code accounts for all but three of that ZIP code’s total cases. A total 1,025 cases have been reported at FCI Elkton thus far, according to the Bureau of Prisons. Six inmates and two employees are currently infected.

In Salem, three nursing homes account for at least 177 of the total 314 cases reported in the 44460 ZIP code, according to ODH:

YSU on Wednesday unveiled its own COVID-19 dashboard, after weeks of planning and development.

President Jim Tressel, in an inter-university email, said the dashboard will present weekly case totals among students and employees, taken from local health department data and individual reports to the university, and will be updated on Mondays.

According to the dashboard, last updated Tuesday, the university has reported 13 total cases for the weeks ending Aug. 1 through Aug. 29, 11 of which were students.

The YSU Office of Environmental and Occupational Health and Safety is expected to take up contact tracing duties, and will inform those who may have come into close contact with infected persons, according to the email.

Of those students, eight reported they lived off-campus; another three said they are never on campus. None of them live on-campus.