How Youngstown entities are addressing racism after summer of protests

The killing of George Floyd prompted officials across the country to look inward. In Youngstown, some leaders have decided it's no longer going to be business as usual.
Sep 22, 2020 3:52 AM By: Jess Hardin 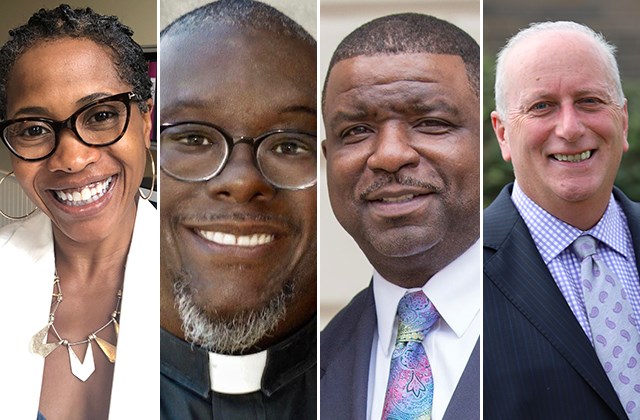 She’s a Black woman in professional America. And more than that, she’s one of the few Black woman business leaders in an old school town where change doesn't come easy.

But when Roller led a staff and board meeting just hours after seeing the video of George Floyd’s killing, swallowing her emotions was not an option.

Roller started the meeting via Zoom and paused when her voice broke. She got a text from her colleague offering to stop the meeting, but Roller powered through, letting her voice break and letting the tears flow.

“It was OK, because we needed to do that. We needed to experience — and we needed to talk about and share — stuff that was real right now,” Roller said. "This is a safe space, and we can't just say it is and make it so."

In her six-year tenure as Wean Foundation president, she has pushed back against entrenched Youngstown business culture, especially when it comes to racial equity.

After George Floyd’s death at the hands of Minneapolis police during Memorial Day weekend and the subsequent protests that bloomed across the country, activists in the Mahoning Valley focused on challenges to advancement for people of color.

The increased scrutiny prompted by a summer of calls for racial justice has revealed Black people in the Mahoning Valley face persistent and often unrecognized obstacles to jobs and promotions.

After Floyd's death on Memorial Day, community activist Jon Howell took to Facebook to outline what he wants to gain from the Movement for Black Lives. One of the objectives, for Howell, is equity in hiring and promotions.

The unemployment rate for Black workers is triple that for whites. And the poverty rate in the city is 36 percent — more than twice as high as in the rest of Mahoning County.

“There is no way you can talk about justice and equity in the United States of America, without talking about jobs and employment,” Howell said. “Education and jobs [are] what helps level the playing field between minorities and non-minorities.”

The coronavirus pandemic has only exacerbated the situation. For July 2020, the unemployment rate for Mahoning County was 11 percent. That’s the fifth-highest of Ohio’s 88 counties.

With the confluence of the pandemic and nationwide racial unrest, Howell and Holy Trinity Missionary Baptist Church Pastor the Rev. Lewis Macklin set out to examine the scope of the problem in the Mahoning Valley. They interviewed leaders at entities including the United Way of the Mahoning Valley and the Youngstown/Warren Regional Chamber.

In a podcast hosted by Vazquez Family Ministries, Howell summed up their findings: “Nepotism and favoritism are still alive and well in the Valley.”

Their conclusions: People hire and promote their friends and relatives. Family names and family connections carry a lot of weight. Many small businesses have been in families for generations.

As a result, young people in business benefit from the wisdom and experience of their entrepreneurial parents, relatives and friends.

“But for someone Black, they may be the first generation to actually have a business,” said Youngstown Mayor Jamael Tito Brown. “They may not know that process.”

The most visible indicator of equity in hiring is employee demographics, so Howell and Macklin started there.

“We try to hire the best people. We try to represent our community,” said United Way President Bob Hannon. But, he added, he knows the organization can do a better job of recruiting people of color.

"I told Lewis Macklin, I said, if you have anyone who you think is capable and qualified to work at the United Way, send them my way. I don't have any openings now, but I'll interview them tomorrow. We'll put them on a short list."

According to Howell, there are no people of color on staff at the chamber. Its board is 7 percent minority.

For Howell, the difference in culture between the two organizations was stark.

“As far as leadership and the people we interviewed I will say this, that the United Way had a much better attitude about the shortcomings they had in hiring minorities than the other organization we've mentioned. The [chamber], in my opinion, said they have their hiring practices and they're not changing them," Howell said.

When asked about the chamber, Brown said he couldn't speak to specific issues but would like to know the organization's strategy for reaching out to Black and minority-owned businesses in the area.

Mahoning Matters repeatedly reached out to chamber President and CEO Tom Humphries, but he chose not to comment. The chamber did, however, issue a news release in July affirming the organization stands against racism.

"The regional chamber is committed to doing its part by continuing to promote the work being done by our members who are engaged in assisting minorities with access to employment opportunities and business ownership," the statement read.

In its 70-year history, the Wean Foundation has changed as much as Youngstown has.

Steel entrepreneur Raymond John Wean established his family foundation in 1949 to serve the communities that contributed to his steel industry success.

When Youngstown elected its first Black mayor, Jay Williams, in 2005, the foundation was also becoming more representative of its community.

Until the early 2000s, the foundation was governed by a family-managed board. Under the directorship of community leaders, it became a private foundation with a renewed focus on "the under-resourced communities of Warren and Youngstown."

She's taken a holistic approach, examining everything from the organizations that receive foundation grants to the businesses hired to wash the windows of the organization's office.

In a news release issued earlier this month, the foundation pledged to make strategic investments in organizations led by people of color.

“We need to do more than advocate for change. We have to rethink the dynamics of decision-making in the Valley. We have to ask each other who has the power to determine access to resources, knowledge and opportunity — and why," Roller wrote.

"How one can walk away and not be affected to do something different?" Roller asked and paused. "I don't even know. I can't even finish the sentence."

She started by reaching out to the foundation's partners: Who provides your office supplies? Who washes your office windows? She asks her staff, too: Who do you use at home? Can this person's skills translate to a commercial setting?

“We’re trying to be really inventive. And we’re always trying to learn, too," Roller said.

In a recent conversation with Mayor Brown, Charlie Staples — owner of the self-named downtown restaurant Charlie Staples Bar-B-Que — expressed concern about his retirement.

“He’s in his 70s. He says if he leaves right now, he has no one [who] really can take over his business," Brown said.

Brown envisions a minority business incubator that would utilize resources to create a network for people of color in business. Through these kinds of connections, leaders like Staples could create a legacy. Or, a young Black restaurateur could find a business mentor in Staples.

Brown also said his administration is working to launch an employment center to provide a centralized resource for job-seekers and employers with job openings. The center could also connect job-seekers with educational resources.

“I get people all the time say, ‘Hey there's no jobs,’ and I get employers saying, ‘Hey, there’s nobody applying.'" Brown said.

In their podcast, Macklin and Howell said they would like to see a plan from the city for achieving equity in hiring.

The plan would bring together education, political and business leaders and establish measurable goals. With the pandemic both increasing unemployment and disproportionately affecting people of color, making inroads is more urgent than ever.

“If you’re not at the table, more than likely, you’re on the menu. And this is not a bon appétit moment,” Macklin said.