The governor spoke to the pain of the black community in Ohio and across the country, calling protests expressing outrage at the murder "appropriate." But told protesters not to "fight violence with more violence."
May 29, 2020 4:52 PM By: Jess Hardin 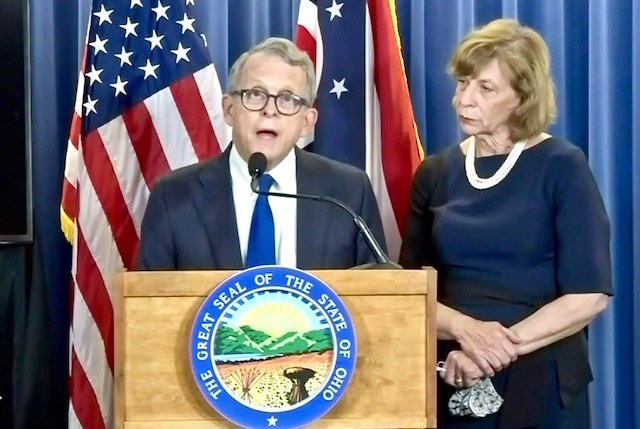 Gov. Mike DeWine and his wife, Fran, during his impromptu news conference on race relations on Friday, May 29, 2020.

DeWine called the press conference to address the murder of 42-year-old George Floyd, a black man, by police in Minneapolis on Memorial Day and the protests at the Ohio Statehouse in response to the killing Thursday night.

In his remarks, DeWine spoke to the pain of the black community in Ohio and across the country, calling protests expressing outrage at the murder "appropriate." But he entreated protesters not to "fight violence with more violence."

When asked about a tweet by President Donald Trump stating "looting leads to shooting" — which was flagged by Twitter for glorifying violence — DeWine said, "No, I would not agree with that."

Trump tried to walk the tweet back Friday afternoon, tweeting “Looting leads to shooting, and that’s why a man was shot and killed in Minneapolis on Wednesday night — or look at what just happened in Louisville with 7 people shot,” Trump wrote, adding “I don’t want this to happen, and that’s what the expression put out last night means."

DeWine tied Floyd's murder to the coronavirus pandemic, noting the health disparities laid bare by the virus. In a briefing last week, DeWine noted the disproportionate number of cases and deaths from COVID-19 among black Ohioans. He vowed to increase access to testing, especially in underserved Ohio communities.

"The pain, the distress, the anger, the fear are real," said DeWine, "I want to make sure, as governor of this state, that I say to every African American, every African American male, women, children: you’re valued. You’re an essential part of this community, and no one will forget that."

"Today and every day since, I have grieved the gruesome death of George Floyd who was killed while in police custody in Minneapolis, Minn. on Memorial Day. Mr. Floyd should be alive today. My heart goes out to the Floyd family who are grieving his senseless death."

Brown said he is working with Youngstown Chief of Police Robin Lees and other local leaders "to make sure this never happens in Youngstown."