"First of all, my biggest thanks is to the voters of Youngstown. Their support was very evident tonight, and I think it's because I've talked about where we were, where we are and where we want to go as a city," Mayor Jamael Tito Brown said.
May 5, 2021 3:52 AM By: Ellen Wagner 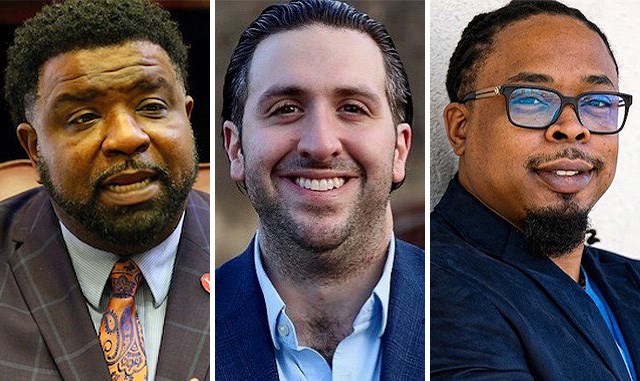 YOUNGSTOWN —  Incumbent Jamael Tito Brown on Tuesday won the Democratic primary for Youngstown mayor, according to unofficial election results from the Mahoning County Board of Elections.

"First of all, my biggest thanks is to the voters of Youngstown. Their support was very evident tonight, and I think it's because I've talked about where we were, where we are and where we want to go as a city," Brown said Tuesday evening. "I look forward to continuing to work for them and with them."

With $88.6 million in pandemic relief funding being piped to the city's coffers this year and next, Brown told Mahoning Matters he expects November general election voters will want a "good steward of the city's finances." He pointed to the city's deficit in 2018 and 2019, which has since been turned into a surplus.

"You have two great young men who are looking to be leaders of this community. I'd love to sit down and hear some of their thoughts on what their visions were, deciding where they want to take Youngstown," Brown said. "I would look forward to working with them."

Kelly said he met a lot of residents throughout his campaign. He heard their problems and wanted to offer solutions. He hopes that issues all the candidates brought to light during campaigning will be addressed by the next mayor of Youngstown.

He said it was disheartening to see that only 5,000 residents voted in the primary election with about 63,000 residents and about 48,000 registered voters countywide, which is less than 9 percent voter turnout.

“We need to get people involved ... and that starts with again holding ourselves accountable and moving forward,” Kelly said.

Kelly said he hopes everyone involved in the Democratic primary will be included in the solutions to better the future of Youngstown.

Oliver said as someone who grew up on Youngstown's South Side, he was excited to show residents what they are capable of by running for mayor.

Although the residents didn't choose him, Oliver said he will remain a “champion for the people” to fight for their concerns and their needs.

Oliver said he will continue to try to work with this administration, even though there have been failed efforts in the past working with Brown, to inspire residents to push forward the administration.

He said he will also continue to push his mayoral platform.

“I’ve put down roots and invested in the city, and I don’t plan on going anywhere,” Oliver said.

Brown is a lifelong resident of Youngstown and was elected as Youngstown’s 51st mayor in 2017.

Brown previously told Mahoning Matters that he worked to restore the integrity at City Hall that had been missing since before he became mayor in 2017.

Brown said he thinks the pandemic will be the No. 1 challenge the city faces in the next mayoral term.

“The one thing I continue to stress is that I don’t want us to come out and just survive. I want us to thrive,” Brown told Mahoning Matters in April.

The city is expected to receive $88.6 million in federal pandemic relief through the American Rescue Plan and will have until 2024 to spend the funds. The city expects to receive the first half of the funds in May and the remainder in 2022.

Brown called the $88.6 million a "legacy opportunity" for the city and wants to create a comprehensive plan that involves citizens, community partners, City Council and the mayor’s office. He would also hire a compliance officer to make sure that funds are spent the right way.

Some of his plans also include cleaning up blighted properties, developing a new housing strategy for quality and affordable housing, and a full-scale grocery store to address food insecurities and infant mortality.

In the November general election, Brown will now face four challengers as three independent candidates have filed to race for the Youngstown mayor’s seat, according to the Mahoning County Board of Elections.

In addition, Calvin Hill Sr. of Lilburne Drive also filed to be a write-in candidate.