Is chlorophyll water actually good for you — or safe? TikTok trend has experts talking

TikTok users claim the supplement is a cure-all for health issues such as acne, bloated bellies and body odor.
Apr 29, 2021 5:45 AM By: Katie Camero | McClatchy 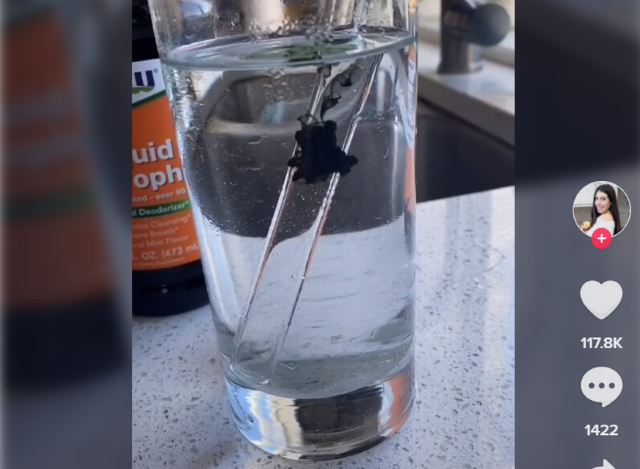 Screenshot of a TikTok video on the benefits of drinking chlorophyll water, which experts say lacks sufficient research. (TikTok)

Water doused with chlorophyll — the natural compound in plants that make them green — has become the latest TikTok trend. Users are claiming it’s a cure-all for health issues such as acne, bloated bellies and body odor.

But does the infusion really carry that many healing powers? And is it safe?

Experts agree drinking liquid chlorophyll won’t put your health at risk, but little research on its benefits leave the pros hesitant to give the trend the green light.

What experts can confirm are the already proved benefits of eating green vegetables such as spinach and parsley, potent with natural chlorophyll. So, instead of turning to supplements, which do not contain actual chlorophyll but rather a semi-synthetic version of it, experts suggest sticking with your veggies.

“[Chlorophyll] is well known to possess antioxidant and anti-inflammatory properties, so in that respect it likely does help to support the health of our cells, and thus tissue and organ function, but more research is needed to fully understand the entire scope of its health benefits,” Dr. Noelle Reid, a Los Angeles-based family medicine physician, told NBC News.

Chlorophyll can come in supplemental forms such as pills, ointments, sprays and liquids, the latter of which is most popular on social media. However, most of its benefits come from rubbing topical versions of it on your skin, not drinking it, according to Dr. Hadley King, a New York City-based dermatologist.

“Some clinical trials have shown that chlorophyll in a topical form has anti-inflammatory and anti-bacterial properties that may help reduce acne,” Dr. King told Refinery29. “But with orally-consumed chlorophyll, we don’t yet have data about its effects on acne.”

This semi-synthetic version has also been shown to decrease toxic damage to DNA by up to 55 percent in people who took 100-milligram doses three times a day. This, in turn, may help prevent cancer.

“Taking chlorophyllin or eating green vegetables, like spinach, that are rich in chlorophyll may be a practical way of reducing the risk of liver cancer and other cancers caused by environmental triggers,” Dr. Thomas Kensler, professor of environmental health sciences at the Johns Hopkins Bloomberg School of Public Health, said in a 2001 statement.

Dr. Joshua Zeichner, a dermatologist in New York, said oral chlorophyll together with a healthy diet may also support oxygen delivery in the body.“There’s some data suggesting that oral chlorophyll may enhance production of red blood cells in the body,” Zeichner told Refinery29. “This could mean better delivery of oxygen and nutrients to your organs, including your skin.”

Other reported benefits of chlorophyllin are immune system stimulation, blood detoxification, cleansing of the intestines and odor elimination, according to Healthline. Some possible side effects include digestive problems, diarrhea and green, yellow or black stool.

“I’ve seen enough people feel benefits anecdotally from including chlorophyll in their routine to feel that it can be a good part of an overall healthy lifestyle, despite a lack of rigorous research behind it,” Arizona clinical nutritionist Laura DeCesaris told NBC News.