“It appears the Secretary has arbitrarily drawn the ‘outside’ boundary somewhere beyond a board’s premises but not as far as a library a few miles away. This leaves the Court and the boards with no working definition of where ‘outside’ collection is permissible,” U.S. District Judge Dan Polster wrote.
Oct 9, 2020 11:07 AM By: Julie Carr Smyth 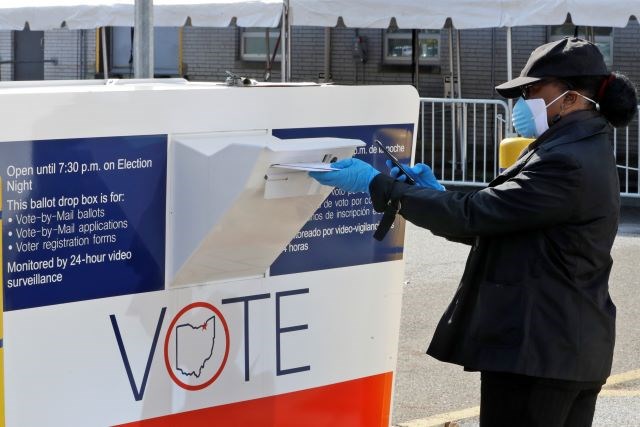 In this April 28 file photo, Marcia McCoy drops her ballot into a box outside the Cuyahoga County Board of Elections in Cleveland. (AP Photo | Tony Dejak, File)

COLUMBUS (AP) — A federal judge on Thursday temporarily blocked an order by Ohio's elections chief that limits the number of ballot drop boxes available in next month's election, calling the move “essential to vindicate a vital constitutional right.”

U.S. District Judge Dan Polster's decision marked the second time in recent weeks that a court has ruled against LaRose's directive restricting ballot drop boxes to a single location in each county in the presidential battleground state.

A voting rights group keen on expanding access to the boxes — which voters see as an attractive option amid concerns about Postal Service cuts and the coronavirus pandemic, and which are often sought by urban, more Democratic-leaning counties — had asked Wednesday for Polster to reopen its case after LaRose said the judge's ruling was “expressly contrary” to LaRose's intent.

Polster, based in Cleveland, had dismissed the A. Philip Randolph Institute's case Tuesday because he said a clarification LaRose issued to his one-box-per-county order now permitted ballot drop boxes at multiple locations within a county. That was what the institute's lawsuit had been seeking.

But LaRose's office argued that by allowing drop boxes “outside” boards of elections, his new directive was meant to restrict them to board property just outside the building — not to allow them off site.

“It appears the Secretary has arbitrarily drawn the ‘outside’ boundary somewhere beyond a board’s premises but not as far as a library a few miles away,” he wrote. “This leaves the Court and the boards with no working definition of where ‘outside’ collection is permissible.”

Polster's original order said the Cuyahoga County Board of Elections could move forward with its plan under LaRose's clarified order to set up ballot drop boxes at six public libraries scattered around the county, which is home to Cleveland. But lawyers for LaRose immediately ordered the county not to proceed.

Three courts have now scolded LaRose for the original drop box directive, calling it unreasonable and arbitrary. A state appellate court made clear he had the authority to remedy the order under law.

LaRose and his Republican allies in the case, including President Donald Trump's re-election campaign and the Republican National Committee, argue that Ohio voters have ample opportunities to vote, including being able to deliver absentee ballots by mail or in person.

“Voting has begun, and Ohio's elections are safe, secure and accessible,” LaRose spokeswoman Maggie Sheehan said in a text message Thursday. “The place to make changes in how we run our elections is the Statehouse, not the courthouse.”

Polster said defenders of the directive “gloss over the risks and obstacles that those options present under today’s unprecedented conditions.”

Jen Miller, executive director of the League of Women Voters of Ohio, said now that both state and federal courts have ruled against the order, LaRose should relent and begin working with Ohio’s 88 county boards to add more drop boxes.

“We applaud the judge’s ruling, because multiple, satellite drop boxes provide better access for voters in rural and suburban areas as well as senior citizens, voters with disabilities and those without reliable transportation,” she said in a statement.