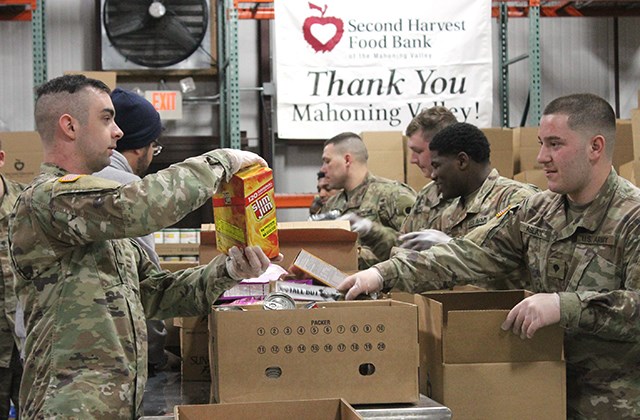 Twenty men and women in Ohio's National Guard helped sort emergency boxes filled with food at the Second Harvest Food Bank of the Mahoning Valley facility in Youngstown. They were deployed to assist with food distribution in the area. (Photo by Justin Dennis | Mahoning Matters)

WASHINGTON — A bipartisan group of lawmakers is asking that National Guard members deployed to help fight the COVID-19 pandemic receive additional benefits when they return to state service.

“This is the definition of heartless. Just one day before thousands of National Guardsmen are set to receive additional education and retirement benefits, the Trump administration plans to end their deployment,” U.S. Rep. Tim Ryan of Howland said in a news release. “Let me repeat — this administration is ending their deployment one day before they would receive additional benefits.”

A National Guard spokesperson told Politico that the Guard could decide to extend the deployments.

“We’re not there yet on the determination,” the spokesperson, Wayne Hall, told Politico. “Nobody can say where we’ll need to be more than a month down the road.”

National Guard members have provided logistical support, humanitarian relief and medical care to communities across the country. The Ohio National Guard has helped provide food to those in need through the Second Harvest Food Bank of the Mahoning Valley and the Akron-Canton Regional Foodbank.

“Our national success in flattening the curve will not be possible without the contributions of the National Guard,” the lawmakers wrote in the letter. “We believe it is critical to ensure that all National Guard personnel are taken care of during this crisis and after, recognizing that the threat of COVID-19 will not immediately go away and the National Guard is likely to be called on again in the future.”

Rabies vaccine-laden baits to be distributed in Mahoning County
Aug 1, 2021 6:15 AM

Hobby Lobby bought ancient stolen tablet with tale of Gilgamesh. The feds seized it
Aug 1, 2021 5:55 AM