'Leaving us in here to die': Video appears to come from inside FCI Elkton

An inmate claiming to be incarcerated at FCI Elkton in Lisbon broadcasted a video Friday to Facebook Live, bringing attention to the prison's response to COVID-19.
Apr 5, 2020 4:18 PM By: Justin Dennis 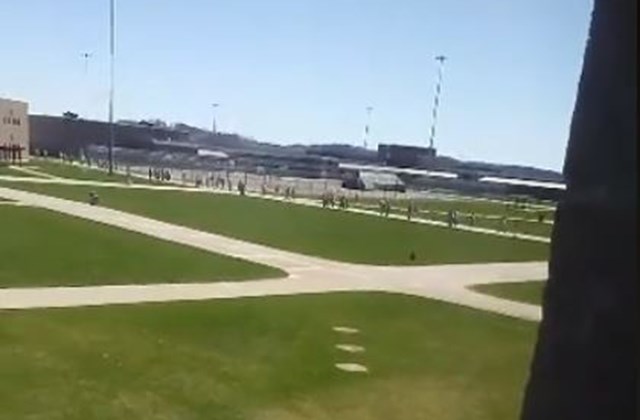 Shown here is a still from a Facebook Live video filmed by a man claiming to be incarcerated at Federal Correctional Institution Elkton in Lisbon, Ohio. (Facebook)

[EDITOR'S NOTE: This story has been updated to correct Yousif Pira's original year of incarceration to 2017.]

LISBON — An inmate claiming to be incarcerated at Federal Correctional Institution Elkton broadcasted Friday on Facebook Live, calling for awareness of a severe outbreak of the new coronavirus, or COVID-19, among the prison’s population.

“All of a sudden, out of the blue, everybody’s dying; getting sick,” the man said. “This is serious. … They’re literally leaving us in here to die.”

He can be seen turning the camera toward one of his cellmates under a blanket just a few feet away, whose breathing appeared labored and can be heard coughing. Though the man said inmates have been urged to stay six feet away from each other, that’s impossible in their cells.

Inmates have each been given surgical masks — not N95 masks which are able to repel the microscopic virus and have been prioritized for hospital workers and first responders in the state — as well as bottles of soap, but the inmate said it doesn’t seem like enough.

“Everything they got set up is to protect the [correctional officers] from getting infected. It’s like — no protection for the inmates,” he said.

The U.S. Department of Justice on Friday acknowledged FCI Elkton and other federal prisons in Danbury, Conn., and Oakdale, La., are struggling to contain the virus.

The federal CARES Act signed into law late last month grants special authority to U.S. Attorney General Bill Barr to expedite the release of federal inmates, or place non-violent or non-sexual offenders on home confinement. More than 500 have been moved to home confinement so far, according to the Bureau of Prisons.

But the inmate broadcasting to Facebook claiming to be at Elkton said though he meets those criteria, he’s been denied release.

He said he’s “paranoid” he may be beginning to see an onset of symptoms.

“I don’t know what to do. … I need you all to help me spread awareness of what’s going on,” the inmate said to those watching the live video, which had more than 88,000 views and been shared more than 6,000 times by Saturday afternoon.

“People shouldn’t have to die like this,” he said.

The man said he knew FCI Elkton inmate Woodrow Taylor, 53, whom the prison reported died Thursday — though Taylor's COVID-19 diagnosis had not been confirmed. The prison has since reported the deaths of a 65-year-old inmate and a 76-year-old inmate. As of Saturday, the prison was reporting nine total cases of the virus in the facility, including seven inmates and two employees.

FCI Elkton inmate Yousif Pira, a Chicago man in his sixties, tested positive for the virus and was hospitalized Tuesday with double pneumonia and placed on a ventilator — but that’s the last Pira’s daughter Isabella has heard about his condition, she told Mahoning Matters.

“They called us one time and we’re standing by the phone waiting for an update,” Isabella said. “We’re just kind of left in the dark.”

Isabella said she’s called multiple times since them — and spent two hours Friday trying to reach a prison representative by phone — but the prison was only able to offer a chaplain to talk to them. The prison is not allowing Yousif’s family — who also live in Chicago — to visit him, nor have they told him where he’s hospitalized.

Yousif in the last two weeks complained to family members he was having difficulty breathing. Isabella said he was “rushed to the hospital” Tuesday when he became unable to breathe.

She said her father does not have any underlying health conditions, which health officials say put a COVID-19 patient at greater risk.

Yousif was incarcerated in 2017 and is serving a mandatory 10-year sentence for conspiracy to manufacture and distribute marijuana, Isabella said.

“We don’t even know if we should contact any other relatives because of how confused and scared we are,” Isabella said. “They’re just going to have the same worries we do. They’re going to be left in the dark.”