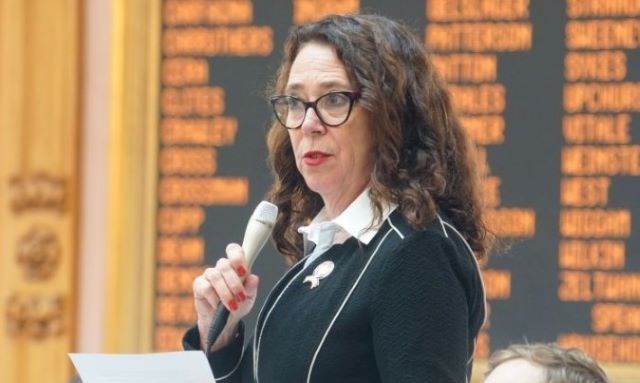 State Rep. Michele Lepore-Hagan of Youngstown, D-58th, has written a letter to the Ohio Secretary of State questioning why some provisional ballots were tossed. (Photo courtesy of ohiohouse.gov)

Lepore-Hagan along with Paula Hicks-Hudson, D-Toledo, and Bride Rose Sweeney, D-Cleveland, sent a letter on Tuesday to Frank LaRose challenging his order telling county boards of elections that they must throw out some provisional ballots cast in the April 28 primary election.

In a Monday night social media post, LaRose said he opposed House Bill 197, the COVID-19 relief bill passed in March that also contained primary election cleanup provisions, and he accused the three Democrats of not reading the bill.

We write with questions about your most recent directive requiring county boards of elections to throw out certain voters’ ballots. We were stunned to see this order come out after the voting concluded requiring that some of the 44,368 provisional ballots cast in this primary be rejected. Can you provide us answers to the following:

Question 1: What provision of House Bill 197 requires you to throw out the ballots of some Ohio voters? We have attached the four pages of the 350-page bill that deal with the primary for your convenience. Like you, we also did not get our first choice of plans to rescue this primary, but we do not see any provision requiring rejecting provisional ballots. Please see Division E which states all provisional ballots are eligible to be counted.

Question 2: You issued a directive on April 17 stating voters must be provided provisional ballots at a minimum. You did not direct counties at that time to reject a portion of the provisional ballots. Why did you wait until after the end of voting to make new rules about rejecting ballots?

Question 3: What about people who mailed an absentee application well before the April 25 deadline, but the application did not arrive at the Board until after the deadline? Because that person desperately wanted to exercise their constitutional right to vote, they would have no choice but to go to the Board to cast a vote. Will their provisional ballot count under your new rule?

Question 4: How many of the 44,368 outstanding provisional ballots will be rejected under your new rule?

Question 5: How many of the outstanding provisional ballots are Republican primary ballots and how many are Democratic primary ballots? We can see that most of them come from our eight largest, most diverse counties but you have not provided party breakdown for these ballots.

Secretary LaRose, we here on Capital Square are steeped in state government news each day, but regular everyday Ohioans are not. Everyone in the state is dealing with this crisis. Families have their children at home and are trying to provide them with an education while continuing to work. Citizens and patriots are working on the front lines of this deadly pandemic to provide essential services to their communities. On top of that, news rooms are being gutted, reporters are furloughed. People are suffering and and access to information suffers, too.

A nurse or grocery store worker who heard you say the primary was moved to June 2 may not have heard the correction. People have been told multiple conflicting things about this election. It is fundamentally unfair to punish voters who acted in good faith by taking away their fundamental right to vote.

Now is the time to give grace to each other. We extended that to you and Governor DeWine when you cancelled the election the night before it was to happen, because people's lives and health were at stake. We need to now help Ohioans have their voice be heard and counted, not trap them with yet another confusing change of the election rules after the voting ended. The law requires you to count the votes.

You have reversed course before. After vigorous dialogue with our Democratic Caucus, you changed your purge order last fall to keep thousands more voters on the rolls. We urge you to reverse course again. Very simply, please count the votes.

Thank you for your time. We look forward to receiving more information from your office so we can resolve this election fairly and formulate the best policies for the fall general election.