The Oasis Center for Rehabilitation and Healing is the only nursing home in Mahoning and Trumbull counties that has been fined a six-figure sum following a state inspection in the past three years.
Feb 6, 2020 3:52 AM By: Justin Dennis 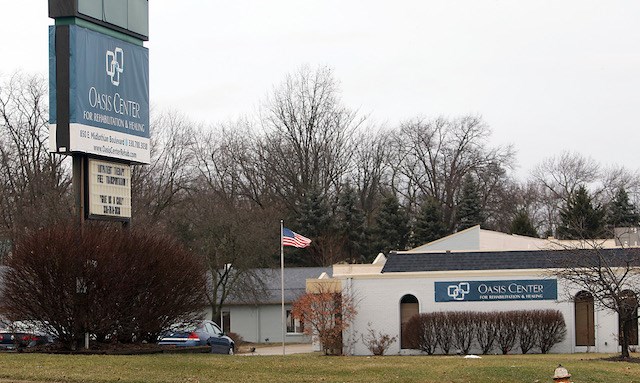 Oasis Center for Rehabilitation and Healing in Youngstown currently has an overall “below average” rating of two stars on Medicare.gov. (Photo by Robert K. Yosay)

[EDITOR'S NOTE: This is the second of a three-part series. To read the list of Mahoning County nursing home inspections, click here.]

YOUNGSTOWN — Only one nursing home in Mahoning and Trumbull counties has been fined a six-figure sum following a state inspection in the past three years.

The Ohio Department of Health has cited Oasis Center for Rehabilitation and Healing, 830 E. Midlothian Blvd., for failing to meet state-minimum standards 58 times since December 2016, according to the Centers for Medicare and Medicaid Services.

Following the facility’s most recent March 18 inspection, it was fined about $114,000 for a reported instance of sexual abuse. A state-tested nurse aide in February 2019 found a 71-year-old male resident — who was known to have a history of sexually inappropriate behavior —  sexually touching a 59-year-old female resident in his room in the facility’s dementia ward.

The residents were separated and evaluated, and the facility in the following weeks took corrective steps to identify and prevent sex abuse. But the suspected abuse itself was one of several serious allegations at nursing homes across the county that weren’t thoroughly investigated or properly reported to the state, Mahoning Matters has learned.

For weeks, Mahoning Matters has reviewed inspection reports on file for the 46 Medicare- and Medicaid-certified nursing home facilities in Mahoning and Trumbull counties.

Ohio Department of Health inspectors perform at least one unannounced, on-site inspection at each such facility in the state on a 9- to 15-month cycle. Those inspectors may issue citations for deficiencies in service, categorized by residents' freedom from abuse, their quality of life, nutrition and the structure or administration of the facility itself, among others. Inspectors categorize those deficiencies by their scope and severity — whether the deficiency created the risk of harm to residents or placed residents in "immediate jeopardy," and whether the deficiency was isolated or widespread.

The inspections also indicate whether deficiencies were corrected, and when.

The Centers for Medicare and Medicaid Services applies overall quality ratings ranging from one star to five stars to each nursing home, which can be found on the Medicare.gov Nursing Home Compare site. The star ratings are based on each facility's health inspections, their level of staffing and the quality of their resident care measures.

Though the ratings offer a "snapshot" of the quality of each facility, they aren't a substitute for visiting the facility yourself, according to the centers' website.

According to Oasis’ March 18 inspection, both residents involved in the alleged sexual abuse incident suffered from dementia and were unable to consent to sexual relations. The alleged abuser had moderate cognitive impairment, and the goal of his care plan was to diminish sexually inappropriate behavior. The alleged victim was “severely cognitively impaired.”

The resident accused of assault was placed under one-to-one supervision and transported to a hospital for an evaluation. The facility refused to readmit him.

The nurse aide who discovered the act was the only aide assigned to care for the dementia ward’s 13 patients that shift. Following the incident, the facility began requiring two aides at all times.

Nurse aides were also re-educated on signs of sexual inappropriateness, according to the inspection.

Though the facility was informed of the alleged abuser’s sexually inappropriate behavior, that wasn’t reported in the resident’s medical record, a clinical liaison told the inspector. That liaison “gave no indication” she spoke with the nurses who cared for that resident about it, according to the report.

Oasis, which currently has an overall “below average” rating of two stars on Medicare.gov, has been a candidate for the state’s Special Focus Facilities list for six months, according to the most recent list released last month by CMS. The designation identifies nursing homes with the most health and safety citations, or which indicate a pattern of noncompliance with particular state standards.

White Oak Manor along Ridge Road in Warren was recently placed on that list after spending three months as a candidate facility, Mahoning Matters reported Wednesday.

State inspectors conducted five complaint inspections at Oasis in 2018 alone, the most in one year of any other Mahoning County nursing home reviewed by Mahoning Matters.

Though Oasis meets or exceeds state and national averages for several quality-of-care metrics, according to U.S. News and World Report and enjoys the highest five-star rating for quality of resident care on Medicare.gov, the facility had a higher volume of substantiated complaints than expected between March 2013 and June 2019, for both short-term and long-term care, the U.S. News report shows.

Oasis spokeswoman Monica Cosma declined to comment on the facility’s inspections, instead deferring comment until after the facility’s next state visit, which is expected within the month.

A look at inspection reports for nursing homes in Trumbull County
Feb 5, 2020 3:52 AM

A look at inspection reports for nursing homes in Mahoning County
Feb 6, 2020 3:52 AM