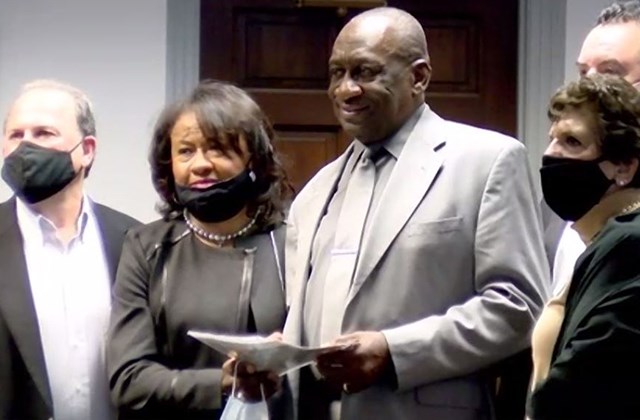 Retiring Mahoning County Department of Job and Family Services Director Bob Bush (third from left) is flanked by new interim JFS Director Audrey Morales (second from left) and Mahoning commissioners David Ditzler (first from left), Carol Rimedio-Righetti (second from right) and Anthony Traficanti (back) during a Thursday, Oct. 29, 2020 meeting in which Bush was honored for his public service career.

He started heading the county's largest department 10 years ago, after serving seven years with the Mahoning County Prosecutor's Office — five of those years as head of the office's criminal division.

"I've had a great, great life and I've been blessed," Bush told commissioners and other county officials who joined virtually or in-person to see Bush off during a Thursday commissioners meeting.

Bush said he's readying for some "leisurely travel" with his wife and plans to put more time into finishing his memoirs — a "snippet" of experiences from his "different lives."

"Thank you for the opportunity. I've enjoyed it. I didn't even look at it as a job. It was my life," he later added. "My wife would complain, 'Robert, you need to get out of [public service].' I would tell her, 'That's all I know.'

"I think it's been more plusses than minuses."

Bush headed up a helicopter crew and served as a door gunner in the Vietnam War, during which he was injured twice and received multiple commendations including two Purple Hearts and a Bronze Star, said Mahoning County Prosecutor Paul Gains.

On Thursday Gains, who also served alongside Bush on the Youngstown Police Department in the 1970s, said Bush epitomizes "service."

"Bob's background and resume read like a Hollywood story — nobody could write a script like that," said Commissioner Anthony Traficanti. "You laid it on the line for this community your whole career and you never left."

"We got a lot of directors and a lot of them are attentive, but every time I called you [Bush] ... you always answered the phone. You were always there to help," said Commissioner Carol Rimedio-Righetti.

Bush told Mahoning Matters he feels he made his greatest mark on the office by settling internal political disputes, also by raising the department's profile in the community.

"I wanted us to be more visible in the community and I think we did that," he said.