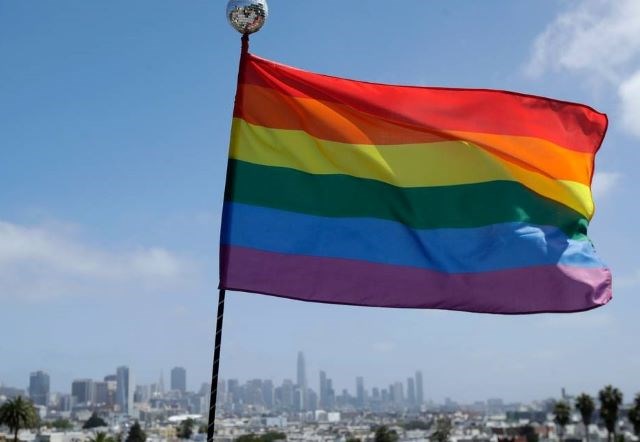 Americans’ support for same-sex marriage has reached an all-time high of 70 percent, according to a new Gallup poll. A small majority — 55 percent — of Republicans support it. (Jeff Chiu | AP)

For the first time since Gallup started tracking Americans views on gay marriage, a majority of Republicans say they support it.

The survey, conducted May 3-18, is based on a sample size of 1,016 adults with a margin of error of plus or minus four percentage points.

A small majority — 55 percent — of Republicans said they support gay marriage in the latest poll, compared to 16 percent who approved when asked about same-sex marriage in 1996.

After the landmark Supreme Court “Obergefell v. Hodges” decision in 2015, which legalized same-sex marriage in all 50 U.S. states and Washington D.C., overall support grew from 60 percent in 2015 to 67 percent in 2018.

“Once opponents of legalization, Republicans have mostly come to back it. Court and legislative challenges to the legal status of same-sex marriage have simmered down since the Supreme Court issued its decision,” Gallup researchers wrote.

“On LGBT rights, everyone has moved on this issue,” Robert Jones, the founder of Public Religion Research Institute poll, told the New York Times. “Whether you’re talking about marriage equality, nondiscrimination protection — everybody has moved. Seniors have moved, white evangelicals have moved, base Republicans have moved.”

According to a 2019 Pew Research Center poll, 44 percent of Republicans surveyed said they support same-sex marriage.

Among religious respondents, 66 percent of “white mainline Protestants” and 61 percent of Catholics said they support gay marriage, according to Pew.

Although white evangelical Protestants have the lowest support among religious groups, approval has grown from 13 percent in 2001 to 29 percent in 2019, according to Pew.

Gallup also found that support for same-sex unions differed by age group. In the latest survey, 84 percent of those ages 18-34 said they support same-sex marriage while 72 percent of respondents ages 34-54 and 60 percent of those 55 and older said the same.