“Last year, I listened to the concerns from many of our people around the area, and I definitely intend to make economic growth and quality jobs a top priority of mine,” state Rep. Mike Loychik said.
Jan 4, 2021 3:58 PM By: Mahoning Matters staff 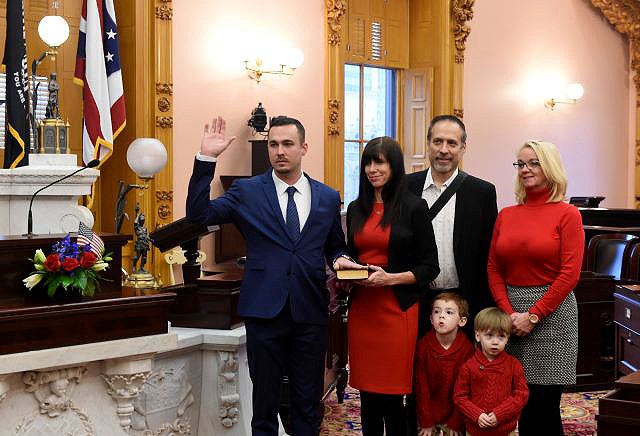 COLUMBUS — State Rep. Mike Loychik, R-Bazetta, was officially sworn in today for his first term as the state representative for the 63rd Ohio House District, which encompasses a portion of Trumbull County.

“It was an honor and a privilege for me to officially begin this new journey to serve the people of Trumbull County down at the statehouse,” Loychik said in a news release. “I’m excited to start representing the needs of my constituents and am ready to get to work.”

Loychik previously served as a C-130 crew chief with a special operations group, as well as a combat search and rescue group, in the U.S. Air Force. Currently, he is the owner of Atlantic Pressure Washing Solutions LLC, which offers professional pressure washing and soft washing services.

Loychik said he is focused on several priorities for the upcoming year.

“Last year, I listened to the concerns from many of our people around the area, and I definitely intend to make economic growth and quality jobs a top priority of mine,” he said. “I do believe we can expand our workforce development to bring good-paying jobs back to Northeast Ohio.”

Loychik said cleaning up the Environmental Protection Agency brownfields will lead to industry and manufacturing growth throughout the region. He also seeks to increase school safety to ensure children are protected while getting an education.