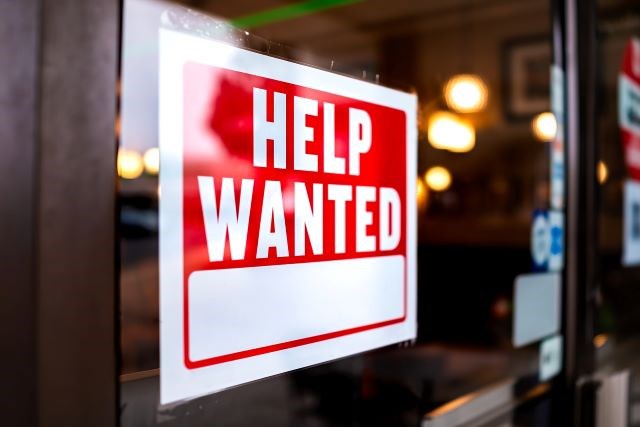 As more Americans get vaccinated against COVID-19, restaurants that are preparing for more dine-in customers are running into a problem — they can’t seem to find enough workers.

Eric Slaymaker, CEO of Utah-based Winger’s, said he cut back operations to takeout only because he can’t staff his restaurants.

“It’s our biggest challenge right now,” he told Restaurant Business. “We just don’t get the applicants.”

A March report by the National Federation of Independent Businesses found that 42 percent of small-business owners reported having jobs they couldn’t fill.

But it’s not just small businesses — restaurant chains are also struggling to hire.

A McDonald’s in Florida reportedly offered $50 to applicants who showed up for interviews.

“At this point, if we can’t keep our drive-thrus moving, then I’ll pay $50 for an interview,” Blake Casper, the franchisee who owns the restaurant and about 60 others, told Business Insider.

He said the incentive hasn’t been as convincing as he’d hoped.

Instead, he’s had better luck with referral programs, bonuses and text message applications, according to the outlet. He’s also considering raising pay from $12 to $13 an hour — $4 higher than Florida’s minimum wage.

The restaurant industry was hit hard by the pandemic, losing 5.5 million jobs in April 2020 alone, according to data from the Bureau of Labor Statistics.

Jobs are returning but haven’t reached pre-pandemic levels. Restaurants and bars saw an increase of 175,000 jobs in March, but the industry was still 1.8 million jobs behind employment numbers when the pandemic hit, CNN reported.

Darden owns several chains including Olive Garden, Longhorn Steakhouse and Cheddar’s Scratch Kitchen. The company had roughly 165,000 hourly workers prior to the pandemic, but that number was only 115,000 at the start of April, Lee said.

What’s causing a shortage in workers?

With so many restaurants set to reopen around the same time, it’s “leading to a massive boost in demand for these workers,” Andrew Chamberlain, chief economist at Glassdoor, told CNN.

He said this makes workers “scarce and hard to hire,” but pointed out that there may just be fewer people willing to work in restaurants to begin with.

Industry insiders say many workers are concerned about working indoors for fear of contracting the coronavirus.

Many restaurants depend on teenage workers, but some parents are forbidding their children from working in such settings during the pandemic, Victor Fernandez of research firm Black Box Intelligence, told Restaurant Business.

“Essential workers are more exposed to the COVID-19 virus, and that has made hospitality occupations less and less attractive,” John Cleveland, executive chef of Post & Beam in Los Angeles, told Restaurant Business. “As a result, people start to figure out another way of life and they move on.”

Some servers and cooks have pivoted to driving for DoorDash and Uber, according to KHOU.

“We needed to hire our full kitchen back, so we tried with that and it turned out our chef who had been with us for three years had decided to pursue another passion of hers, which was financial planning,” she told KMGH.

Yetka and her husband have been working 80-hour weeks to try to make up for the lack of workers, according to the outlet. At one point, they had to stop taking reservations.

“We’re up all night wondering about how we’re going to make it through the next service and make sure everyone is getting taken care of,” Yetka told KMGH.

Jessica Vines, 45, shifted careers during the pandemic. She quit her serving job at a Mexican restaurant in Louisiana and relocated to the Midwest.

“I just didn’t see an end in sight,” she told CNN. “I knew I couldn’t do it for another year.”

She found a job working as an accounting associate at a medical device company in Indiana. Vines told CNN she can’t see herself going back to the restaurant industry.

“If this happened again, I would be at the same place,” she told the outlet. “I don’t foresee ... a safety net for people like me.”

Some restaurant owners have also blamed the shortage of workers on unemployment benefits offered during the pandemic, arguing that they pay better than some jobs in the industry.

“In our opinion, it takes away the urgency of coming out and seeking viable employment,” John Barker of the National Restaurant Association told KHOU.

He said he hopes more workers will be available once benefits run out later this year, according to the outlet.