Need a snack on the go? Kroger tests drone delivery program in Ohio that could help 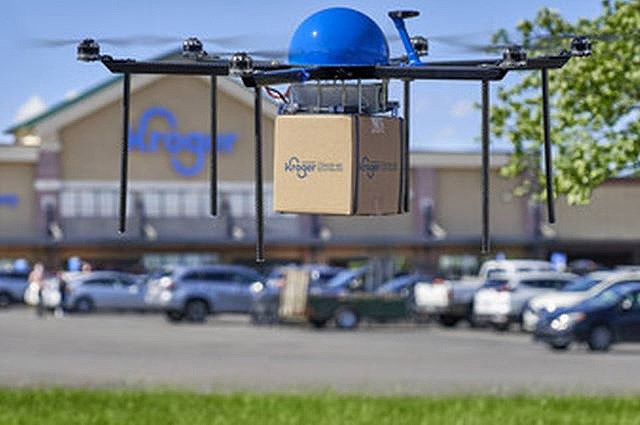 Kroger wants to transform grocery e-commerce with the introduction of a drone delivery pilot taking flight this spring in the Midwest in partnership with Drone Express. (The Kroger Co.)

Picture this: You’re at the park for a socially distanced meetup when you realize you forgot to bring your food.

Normally, you might have to pack up and run home or head to the grocery store, but with Kroger’s new program, you could get snacks delivered right to you — by drone.

The program allows shoppers to receive drone deliveries to the location of their smartphone, not just an address, the company said in a news release.

“The possibilities for customers are endless,” Beth Flippo, chief technology officer for Telegrid, said in a statement. “We can enable Kroger customers to send chicken soup to a sick friend or get fast delivery of olive oil if they run out while cooking dinner.”

The company will begin test flights this week, operated by licensed Drone Express pilots “under FAA authority” from an on-site trailer at the Centerville Kroger Marketplace.

Kroger is also working on developing product bundles that weigh in under the roughly 5-pound limit for what drones can carry. For instance, a baby care bundle would have wipes and formula, while a s’mores bundle would feature graham crackers, marshmallows and chocolate — all delivered at once.

Shoppers will be able to place orders online and receive them in as little as 15 minutes.

Kroger joins Walmart in the drone delivery game. The big box retailer has been testing the method since 2015, and recently announced it is testing Flytrex drones in North Carolina to deliver groceries and other household goods along with Zipline drones in Arkansas delivering health and wellness products, according to the Verge.

Many hope that drone delivery will cut down on labor and fuel costs, creating higher profits for companies, but privacy concerns, weather and insurance could hinder wider use, Bloomberg reported.

Amazon.com Inc.’s Prime Air, Alphabet Inc.’s Wing and United Parcel Service Inc. are the only drone delivery providers currently sanctioned by the Federal Aviation Administration, according to the outlet.

Drone Express is part of Beyond, an FAA program that seeks to connect companies with state and local governments to develop drone delivery programs, Bloomberg reported.