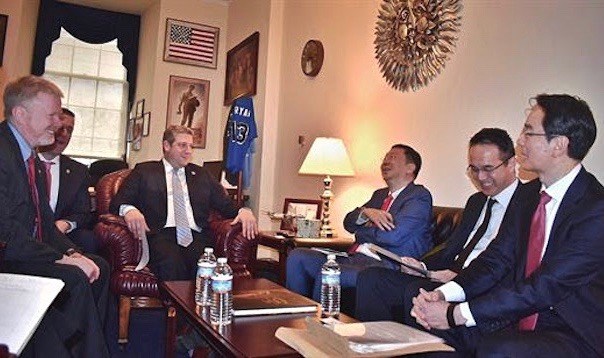 U.S. Rep. Tim Ryan of Howland, D-13th, and State sens. Sean O'Brien of Bazetta, D-32nd, and Michael Rulli of Salem, R-33rd, on Wednesday at the Capitol hosted several high-level executives from South Korean chemical company LG Chem, which is partnering with General Motors on the $2.3-billion venture. They shared new details with reporters during a media conference Wednesday afternoon.

"We are 1,000-percent behind them. This is an absolute home-run for our community," Ryan said, later adding, "We're going to become the battery capital of the world."

Though groundbreaking at the 158-acre site along Tod Avenue — which is next door to the Lordstown Motors Corp. complex — was initially slated for April, the legislators said executives are now aiming for July, suggesting though executives feel the plan is ahead of schedule, the delay may be due to permitting issues.

The facility is expected to create 1,100 to 1,500 permanent jobs, Ryan said Wednesday. Though he later added the facility's higher-end jobs would require specialized skill sets, much of the entry-level training could be done at LG's Korean facilities, with trainees spending time overseas.

"For the vast majority of jobs, they were talking about a few months of training," Ryan said, adding lower-level jobs wouldn't require prerequisite skills, other than the willingness to train overseas.

"You're going to get a good job in an industry that's growing and paying well," he said.

"This is a once-in-a-lifetime opportunity," Rulli echoed, adding that higher-level jobs could pay "a lot more, maybe double that."

O'Brien said executives assured the hires would be local: "They said, 'We're not going to be bringing a lot of people from Korea over.' It's going to be local people doing these jobs."

The GM/LG Chem joint venture, currently dubbed GigaPower LLC, is still awaiting regulatory approval. But Ryan said this type of partnership between a large automaker and specialized industry is becoming more common in the auto industry.

The legislators asked whether the plant's electric vehicle battery cell could find enough business with General Motors. Rulli said the company is also dealing with Land Rover, Jaguar, Volvo and Volkswagen and several other automakers — a large portion of the market, he said.

O'Brien said one LG Chem exec said the proposed facility would be three-times larger than GM's Michigan battery plant — Brownstown Battery, which is 479,000 square feet, according to the GM website — and one of the biggest such plants in the northern hemisphere.

"They wanted to come meet with us. ... They said, 'that's the Korean way.' They wanted to be very neighborly," O'Brien told reporters Wednesday. "I think this is a major step in moving forward as we turn our area from the 'Rust Belt' to the 'Volt Belt'."