In May 2019, the Mahoning Valley Human Trafficking Task Force partnered with other agencies to arrest 16 men seeking to have sex with children in Canfield. In April and March, the same task force arrested 16 men in Youngstown and Warren.
0
Jan 8, 2020 4:27 AM By: Mahoning Matters staff 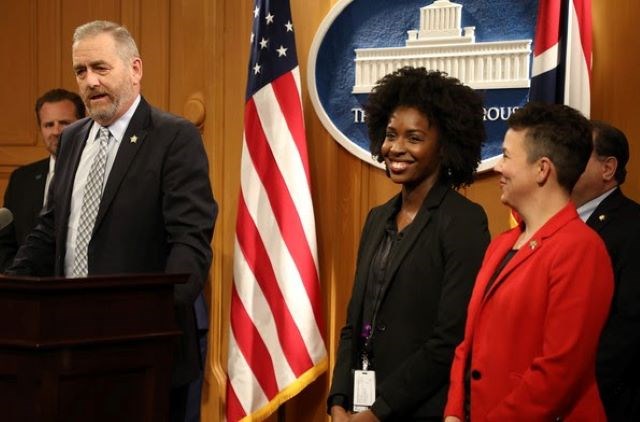 People with such vulnerabilities live in every part of Ohio, encapsulating why human trafficking is a problem affecting the whole state.

“The fact that you don’t see it doesn’t mean it’s not happening,” Attorney General Dave Yost said in a news release. “It means that it’s happening in the shadows. People don’t want it to be seen, and, for decades, our society was blind to the scale of the problem and blind to those trapped in it.”

According to the Ohio Human Trafficking Task Force, Ohio is the fourth-worst state in the nation for human trafficking. During the first 11 months of 2019, law enforcement task forces operating under the authority of the Ohio Organized Crime Investigations Commission rescued 110 trafficking victims and referred an additional 217 to services.

“We’ve seen that human trafficking doesn’t just affect strangers living in some far-off big city,” said Matt Hilbert, deputy director of OOCIC. “It is happening in suburbs, towns and rural communities, too, right now. Girls who live in my community are at risk.”

“And here’s a hard truth,” Yost said. “Society is not doing enough to end human trafficking. But that doesn’t mean we’re not trying like hell to help these modern-day slaves.”

The Ohio Peace Officer Training Academy offers human trafficking-specific courses, and one of Yost’s main tools is the new Human Trafficking Initiative, for which he has hired two experts in their fields to work full time to improve the human trafficking response in Ohio.

Jennifer Rausch, legal director of the initiative, and Jomel Aird, director of victim services, have been meeting with coalitions, prosecutors and multidisciplinary groups throughout Ohio.

“We have a lot of different people doing a lot of different things throughout the state,” said Rausch, a former leader in the Franklin County Prosecutor’s Office. “As we travel, we’re working to connect everybody to make sure people aren’t reinventing the wheel, to make sure that we can provide resources, too, and bring attention to groups that are doing things really well.”

On Thursday (Jan. 9), various experts will share key information through the attorney general’s inaugural Human Trafficking Summit, where the focus will be to “send people home with ideas they can immediately use to improve the response in their own communities,” Rausch said.

“A big myth that we should all recognize — there’s not some white van coming to a mall and kidnapping people to force them into trafficking,” Aird said. “A lot of traffickers come in as boyfriends or girlfriends. Under that guise, they build rapport, they build trust.”

They offer the seeming love and attention the girl or boy, or young woman or young man, doesn’t get at home. Or, with labor trafficking, they promise a better job and a better life.

For example, seven people were recently indicted in Franklin County after an investigation by the Attorney General’s Office, Central Ohio Human Trafficking Task Force and Columbus police. The ring was accused of luring women into prostitution by offering drugs, gaining their trust and then intimidating them.

“Those invisible chains hidden in the mind can be harder to break than iron links,” Yost said.

Forming a multidisciplinary team is among the “best practices” shared by Yost’s Human Trafficking Initiative.

As a former prosecutor experienced in human trafficking cases, Rausch is compiling strategies for prosecuting trafficking-in-persons charges, educating jurors beginning with voir dire and building cases that involve survivors who don’t present the way jurors probably expect them to.

Yet promoting prostitution is a fourth-degree felony that rarely results in prison time.

“And that’s a problem because the pimps are the criminals,” Yost said. “The mindset of law enforcement and the courts has turned, to recognize that the pimps’ slaves are really victims.”

To that end, Yost is pushing changes to Ohio law that would:

“This is long overdue,” said Sen. Tim Schaffer, sponsor of the legislation in the Ohio Senate.

In the Ohio House, Reps. Cindy Abrams, Rick Carfagna and Jena Powell have partnered with Yost to sponsor the legislation.

“Basic economics works under the premise of supply and demand, and right now we have a demand problem in Ohio,” Yost said.

The attorney general has a multipronged effort to cut demand by catching, shaming and punishing people who attempt to buy sex, especially from children, and by making the public aware that prostitutes are often human trafficking victims.

The Attorney General’s Office, including the BCI and OOCIC divisions, partners with dozens of law enforcement agencies for stings. For example:

“We could probably do a sting every night of the week and still arrest this many johns,” Yost said.

The johns’ names are made public and the stings are proclaimed, in large part, to shame the people who are arrested.

“The buyers of sex are never forced into it and are never victims,” Yost said. “But never underestimate the power of shame as a human motivator.”

Taking that a step further, the online, publicly available registry proposed by the attorney general also would include the names and photos of those convicted of buying sex.

Johns would stay on the registry for five years, according to the plan, which must be passed by the legislature and signed by the governor.

Yost also has proposed changes to state law so that people convicted of soliciting prostitutes would be sentenced to “john school,” specialized counseling for which they would pay, and up to a $1,500 fine for a first offense; 30 days in jail for a second offense; and six months for a third offense.

“The objective is to target all aspects of prostitution to ensure that we punish those who fuel this humanitarian crisis,” Schaffer said.

Yost also has made the case that the movie “Pretty Woman” has given society the wrong idea about prostitutes — that they’re free spirits making rational decisions about how to earn money.

“A prostitute is more likely a woman whose slave master is waiting in his car outside with a dose of heroin, a baseball bat or a knife,” Yost said.

“The victims of human trafficking might be one of the most difficult populations to build trust with,” Yost said. “Folks who have been trafficked usually start out vulnerable to begin with — it’s how they get enticed into the life. And the trust they have given away has been abused.”

Rausch said studies have shown that, on average, it takes up to 10 contacts from advocates or law enforcement officers before victims of trafficking will accept help.

“Victims carry a tremendous amount of guilt,” Rausch said, “that they, at some point, said yes to something, whether it was to go with the trafficker in the first place or to be in a relationship.”