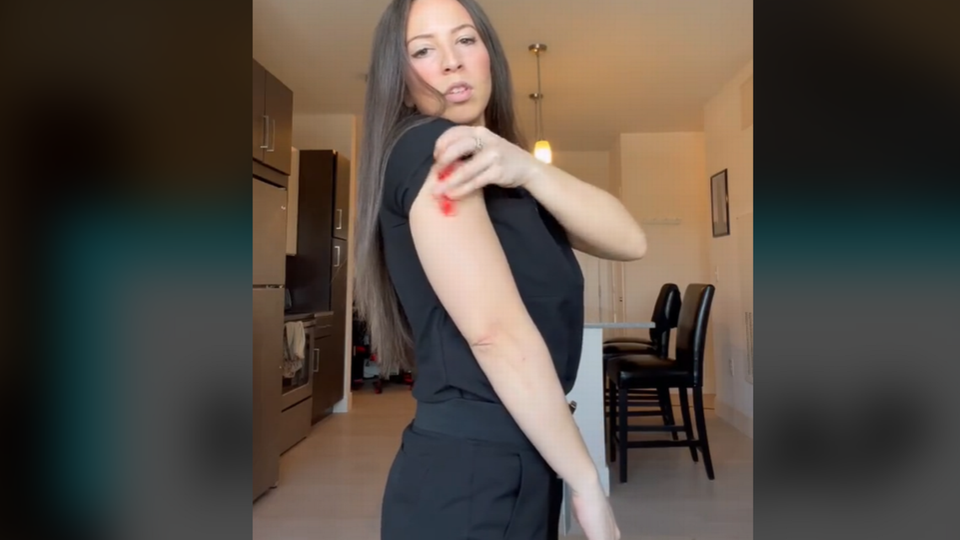 Screen grab of TikTok user @doctorjesss’ video that debunks the COVID-19 vaccine conspiracy theory that the shots contain metals or microchips that cause magnets to attach to vaccinated arms. @DOCTORJESSS

Social media videos of COVID-19 vaccinated people sticking coins and refrigerator magnets to their arms have been spreading a popular conspiracy that the coronavirus shots contain microchips or other metals supposedly used by the government to track Americans.

But instead of facts, all these people have are oily arms and some tape, experts say.

“No. Receiving a COVID-19 vaccine will not make you magnetic, including at the site of vaccination which is usually your arm,” because they are all free of “metals such as iron, nickel, cobalt, lithium, and rare earth alloys, as well as any manufactured products such as microelectronics, electrodes, carbon nanotubes, and nanowire semiconductors” that can create an electromagnetic field, the Centers for Disease Control and Prevention said in an update last week.

“In addition, the typical dose for a COVID-19 vaccine is less than a milliliter,” the agency said, “which is not enough to allow magnets to be attracted to your vaccination site even if the vaccine was filled with a magnetic metal.”

Doctors on social media speculate that magnets people seem to be successfully sticking to their vaccinated arms are only lingering because there’s tape attached behind them or they are secured with some water or spit — tactics invisible to those who watch the videos.

But in most cases, magnets are likely sticking onto arms because of the natural oils and moisture on people’s skin. It’s the same reason why countless kids can wow their parents at the dinner table by hanging spoons on their noses (the trick is to breathe on or lick the spoon to create some adhesion).

And U.S. coins — a common object used to “prove” the COVID-19 vaccines have microchips in them — aren’t even magnetic.

On the other hand, some substances we put in our bodies, like multivitamins, do contain small quantities of metals such as iron, “and you don’t see people becoming magnetized or having magnets sticking to them after taking that vitamin,” Dr. Céline Gounder, an infectious disease specialist and epidemiologist at NYU Langone Health, told PopSugar.

What is inside the COVID-19 vaccines?

Both the Pfizer-BioNTech and Moderna vaccines contain one active ingredient: mRNA.

The vaccines release this molecule — a type of RNA that makes up the coronavirus’s genetic material and can already be found in our bodies — into our cells. This mRNA carries directions that teach our cells how to produce antibodies that protect against the coronavirus.

Excipients “are necessary and added to a vaccine for specific purposes such as stimulating a stronger immune response, preventing contamination by bacteria or stabilizing the potency of the vaccine during transportation and storage,” according to a team of allergists led by doctors at Massachusetts General Hospital.

Some of the inactive ingredients include a variety of lipids, or fats that form a shell around the mRNA molecules and “help keep [it] intact and stable until it gets into your body and starts doing its work,” Dr. William Schaffner, an infectious disease specialist and professor at the Vanderbilt University School of Medicine, told Health magazine in December.

The rest of the ingredients are salts, such as potassium chloride and sodium acetate, sugars (sucrose) and other buffers that help maintain the vaccine’s stability.

The Johnson & Johnson COVID-19 shot is a viral vector vaccine that delivers a harmless DNA virus called an adenovirus that has been genetically modified. This modified virus carries specific instructions into our cells that teach them how to make antibodies.

Aside from this main functional difference, the ingredients list is similar to that of the Pfizer and Moderna vaccines.