'No true supporter of mine' joins a violent mob, Trump says in post-impeachment call for unity

Earlier that day, President Trump's second impeachment had a "bipartisan" vote joined by 10 Republican lawmakers, including one from Ohio.
Jan 14, 2021 4:11 AM By: Justin Dennis 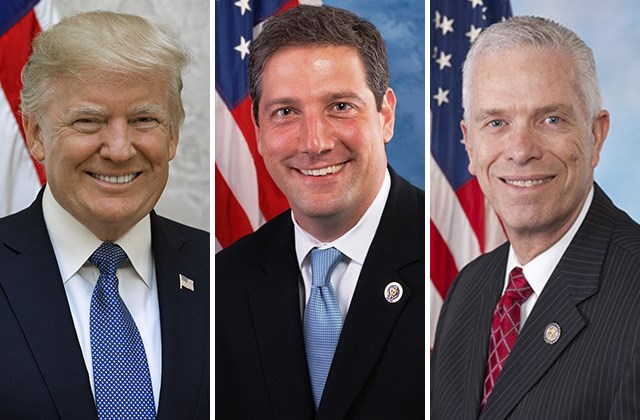 Trump's message came hours after he became the only U.S. president to be impeached twice by an affirmative vote of the U.S. House of Representatives. The vote was 232 to 197.

Ryan reminded reporters during a Wednesday night news conference, it was Trump who, on Jan. 6, waited until long after the U.S. Capitol had already been breached by a deadly mob to call for calm.

In a video statement released Wednesday evening, President Trump denounced what he called the “incursion of the U.S. Capitol'' last week, which left several dead and is expected to lead to federal charges of seditious conspiracy.

Trump appeared to draw a line between his “movement” and a state of lawlessness.

“I unequivocally condemn the violence we saw last week,” Trump said. “Mob violence goes against everything I believe in and everything our movement stands for.

“No true supporter of mine could ever endorse political violence,” he continued.

Acknowledging reports of more hostilities planned for President-elect Joe Biden’s inauguration next Wednesday, Trump said “there must be no violence, no law-breaking and no vandalism of any kind,” and called for Americans to “overcome the passions of the moment” and unite.

“It is needed for him to say that,” Ryan told reporters Wednesday evening. “But I think most people will forgive me for looking at the cynical view here — because when we needed him to say it, he waited over an hour until the Capitol was stormed.

“And even then, it was a half-hearted comment to try to bring some peace.”

Late last Wednesday afternoon, hours into the U.S. Capitol siege, Trump issued a video message on Twitter that said in part, "This was a fraudulent election, but we can’t play into the hands of these people. We have to have peace. So, go home. We love you. You are very special."

Ryan said he believes Trump’s latest message was an attempt to “salvage some shred of dignity to move into his post-presidential life.”

Wednesday afternoon’s vote in favor of impeachment was almost entirely cast along party lines. Ten Republican lawmakers, including one from Ohio, supported the Democratic majority, making it “the most bipartisan impeachment in history,” Ryan told reporters later that evening.

Though impeached, it’s almost certain Trump won’t be removed from office before his term ends.

The Senate will, again, put Trump on trial — this time for inciting insurrection ahead of the deadly riot in the U.S. Capitol on Jan. 6. But Sen. Majority Leader Mitch McConnell has said the chamber will not reconvene until Jan. 19, the day before President-elect Joe Biden is sworn in.

Those hearings will then be conducted by a Democratic majority.

Vice President Mike Pence on Tuesday said he was opposed to invoking the 25th Amendment of the U.S. Constitution as a means to remove President Trump from office immediately.

To use it as a punitive measure would “set a terrible precedent,” Pence said Tuesday.

All of Ohio’s Democratic delegates voted in favor of impeachment, including Ryan.

“There is no place in our democracy for a president who incites violence to overturn the result of a free and fair election,” Ryan said in a statement after the vote.

“After Vice President Pence failed to act, the House was left with no choice but to impeach this dangerous and unfit president. I stood today with lawmakers from many different states and political backgrounds, and we said in no uncertain terms: democracy will not be intimidated,” he continued.

“President Trump’s dangerous behavior will remain a stain on our nation’s history, but we will carry forward and ensure there is a peaceful transition of power on Jan. 20.”

The rest of Ohio’s Republican delegation voted against impeachment, including U.S. Rep. Bill Johnson of Marietta, R-6th. Johnson on Tuesday also voted against a resolution for the 25th Amendment, echoing Pence’s sentiments about improper usage.

In a statement Tuesday, he urged congressional leaders to “stop the political showboating.”

“America is deeply divided. The events of last week’s riots at our nation’s capital, as well as the riots and violence that have rocked American cities across the country over this last year testify to that,” Johnson wrote. “These riots were horrific and heartbreaking, and every single person who broke the law should absolutely be prosecuted to the fullest extent of the law. It should never happen again.

“Today, America needs a chance to begin healing. America needs a break from the riots, the violence, and the vitriol political rhetoric that is encouraging this toxic environment. A 25th Amendment measure or impeachment will do nothing to help America heal, but will certainly widen the division.”

“I don't believe President Trump committed an impeachable offense when he told those at the rally to protest peacefully and make their voices heard,” Kelly said in a statement Wednesday. “He did not tell them to commit violence, and he and all of Congress have rightfully condemned the rioters who breached the U.S. Capitol. If America is to come together, political games have to stop. Impeachment of a president for First Amendment-protected speech just days before he leaves office is not a step toward unity."

The U.S. House impeached Trump in 2019 on charges of abuse of power and obstruction of Congress which stemmed from allegations that he solicited Ukranian authorities to interfere in the 2020 election. He was found not guilty on both charges during his Republican-led trial in the Senate.