The OHSAA says its 11 transgender female approvals have not created any disruption of competition equity.
May 8, 2021 2:50 PM By: By FARNOUSH AMIRI Report for America/Associated Press 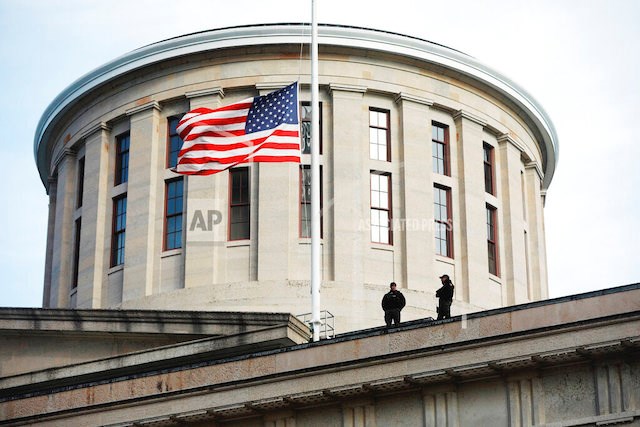 In this file photo from Jan. 13, 2021, troopers are visible on the Ohio Statehouse roof in Columbus. Republican lawmakers in Ohio have introduced two bills that would ban transgender girls from participating in female sports teams in high school or college. The proposals would require schools and higher education institutions in the state to designate "separate single-sex teams and sports for each sex." (Doral Chenoweth/The Columbus Dispatch via AP)

COLUMBUS (AP) — Transgender girls would be banned from participating in female sports teams in high school or college in two bills introduced by Republican lawmakers in Ohio, which became the latest state to take up the contentious debate.

The proposals, titled the Save Women’s Sports Act, would require schools and higher education institutions in the state to designate “separate single-sex teams and sports for each sex."

“In most instances, when young women are forced to compete against young men in athletic competition, it places them at a fundamental disadvantage,” GOP Rep. Reggie Stoltzfus told members of the House education committee last week. “A disadvantage that threatens their athletic achievement and even collegiate scholarship prospects.”

The bills' sponsors say it is an effort to maintain fairness and protect the integrity in women's sports in Ohio, though none of the lawmakers have pointed to a single instance where this has been an issue in the state.

These proposals make Ohio the latest state to join the national debate over how transgender athletes can compete in high school and college sports, causing an outpouring of criticism from those in the transgender community and advocates.

If the bills passed, “trans people would lose opportunities and face higher risk factors, such as mental health struggles, substance dependency, and suicidal ideation,” Eliana Turan, the director of development for the LGBT Community Center of Greater Cleveland, told The Associated Press. “If we are going to talk about saving women and girls, let’s save all women and girls, trans females included.”

Idaho passed its law last year, and more than 20 states have considered such proposals this year.

But while GOP lawmakers across the country take up the issue, in almost every case, sponsors of the proposals cannot cite a single instance in their own state or region where such participation has caused problems, according to an analysis by The Associated Press in March.

The same is true for the sponsors of the two bills in Ohio.

When asked during a committee hearing last week how many 12- and 13-year-old girls have had scholarships revoked due to being outperformed by transgender females, GOP Rep. Jena Powell, the other chief sponsor, mentioned a case specifically in Connecticut, but none in Ohio.

“Across the nation, there are girls who used to hold championships that are now held by biological males, which strips scholarship opportunities, medals, advancement in the sport,” said Powell, a Republican from western Ohio.

The organization in charge of making those determinations in the state, the Ohio High School Athletic Association, said that is not true in Ohio. Since the fall of 2015, the association has ruled in 48 cases of transgender students applying to compete and there have been only 11 transgender female approvals.

“Those 11 approvals have resulted in no disruption of competition regarding competitive equity and they have not caused any loss in female participation, championships or scholarship opportunities,” Tim Stried, a spokesperson for the association, said in a statement. "The OHSAA is confident that our policy, which is based on medical science, is appropriate to address transgender requests and works for the benefit of all student-athletes and member schools.”

The OHSAA doesn’t track participation after approval, so it is unclear to say how many of those transgender students have gone on to compete.

Committee members last week also expressed concern for the mental health impacts that both sides of the issue may experience.

“There is so much more wound up in this particular bill than just physiological advantage,” Democratic Rep. Mary Lightbody said. “This bill will harm the mental health of some of Ohio’s most vulnerable children.”

The lawmakers supporting the passage of the proposal said that is not their intention. But advocates say regardless of intent, the proposals would have irreparable harm.

“[These bills] would hurt trans women and girls by invalidating their identities, normalize and promote transphobic bullying, and effectively prevent trans youth from partaking in the natural human right of athletic participation,” Turan said.

Associated Press writer Andrew Welsh-Huggins in Columbus and Lindsay Whitehurst in Salt Lake City, Utah, contributed to this report. Farnoush Amiri is a corps member for the Associated Press/Report for America Statehouse News Initiative. Report for America is a nonprofit national service program that places journalists in local newsrooms to report on undercovered issues.