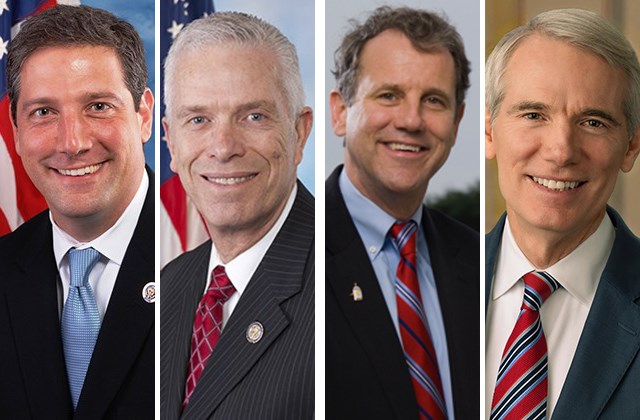 President Biden's plan would make earned income tax credits for childless workers permanent. It would also extend an up to $3,600 tax credit for each family's child through 2025, which Brown said he will fight to also make permanent.

"Even before the pandemic, hard work wasn’t paying off for millions of workers and their families," Brown said. "This plan recognizes that caregiving is work — work that makes all other work possible — and its costs have been eating away at families’ budgets and holding back our economy for decades.

“Throughout this process, I’ve made clear that I’ll never stop fighting to put more money in Ohioans’ pockets through the permanent expansions of [earned income tax credits] and [child tax credits]. We’re not giving up, because these are two of the best tools we have to put reward work and lift millions of children out of poverty.”

U.S. Sen. Rob Portman of Cincinnati, R-Ohio, said in a Tweet Wednesday Biden's $2.7-trillion infrastructure plan "goes way beyond any reasonable definition of infrastructure — only $115 billion, less than 5 percent, goes [toward] our nation's roads and bridges.

"In order to pay for their $2.7 trillion 'infrastructure' plan, President Biden and congressional Dems are proposing the largest tax hike in a generation," Portman continued. "Increasing taxes right when businesses are beginning to rebound from the pandemic. How does that make any sense?"

U.S. Rep. Tim Ryan of Howland, D-13th, said President Biden “has put our country on the road to recovery with more than 200 million [coronavirus vaccine] shots in arms, more than 160 million [stimulus] checks in pockets, and a majority of kids back in schools.

“I am proud of the president’s leadership as we make historic investments in the American people that will help ensure the best days are still ahead for hard-working families in Ohio and across the country,” Ryan continued. “With bold steps forward like the American Rescue Plan, the American Jobs Plan and the American Families Plan, we are working together to right the balance in this country to start rewarding hard work, not wealth.”

“No speechwriter can cover for the fact that while Joe Biden promised unity, the exact opposite has happened since he became President,” Johnson said.

“He is pushing a partisan, progressive agenda that killed off oil and gas jobs with the stroke of a pen, created a national security, health, and humanitarian crisis along our southern border, and is prioritizing the politics of ‘diversity and inclusion’ over readiness and lethality within our military and special operations community. It’s also clear this administration refuses to stand up and support law enforcement — and that endangers law-abiding citizens across the country.

Johnson continued: "President Biden’s big government policies are not sustainable; they are costly and reckless. And in the end, it’ll be hard-working American families left paying the enormous tab."

Dayton Mayor Nan Whaley, who’s seeking the Democratic nomination for Ohio governor, said President Biden’s plan to offer universal pre-K to all 3- and 4-year-olds is similar to a ballot initiative she led in 2016.

Children enrolled in the program for the 2018-19 school year were rated 16 percent “more ready for kindergarten,” than children who were not enrolled, according to her office. The program also showed results in closing the learning gap between Black and white children in Dayton.

“There is no greater investment in our state’s future than the education of our children. … This critical issue is finally getting the national attention it deserves,” Whaley said. “It shouldn’t matter what ZIP code you live in, you should be able to get a good education in Ohio. When I’m governor, I’ll work to make sure that’s a reality across our entire state.”

“In just 100 days, President Biden has already put Ohio back on the path to prosperity as we work to overcome the COVID-19 pandemic and build back better,” Walters said. “It’s clear that President Biden’s steadfast commitment to working families is paying off, as we’re seeing shots in arms and money in pockets all across our state. And President Biden is just getting started, as Ohio gets set to benefit from the plans he outlined tonight to rebuild our state’s infrastructure and invest in Ohio families.”

“Congress has an obligation [to] pass the American Jobs Plan in order to rebuild our roads and bridges, invest in high speed broadband for all Americans and ensure that seniors, individuals with disabilities and workers benefit from a historic investment in home and community-based services, especially to help the more than 16,000 Pennsylvanians on waiting lists,” Casey continued.

“We must also pass the American Families Plan in order to provide economic security and opportunity to all working families. It includes a priority that I have worked on since I began serving in the U.S. Senate — investments in early learning and universal pre-K. Early learning investments are essential to giving children a strong, smart start to their lives. When a child learns more earlier in life, they earn more later in our workforce.”