Ohio governor appeals to FDA and private labs for help

Ohio Gov. Mike DeWine on Saturday asked for a lot of things as the coronavirus crisis continues in the state and across the country.
0
Mar 28, 2020 3:26 PM By: Julie Westfall 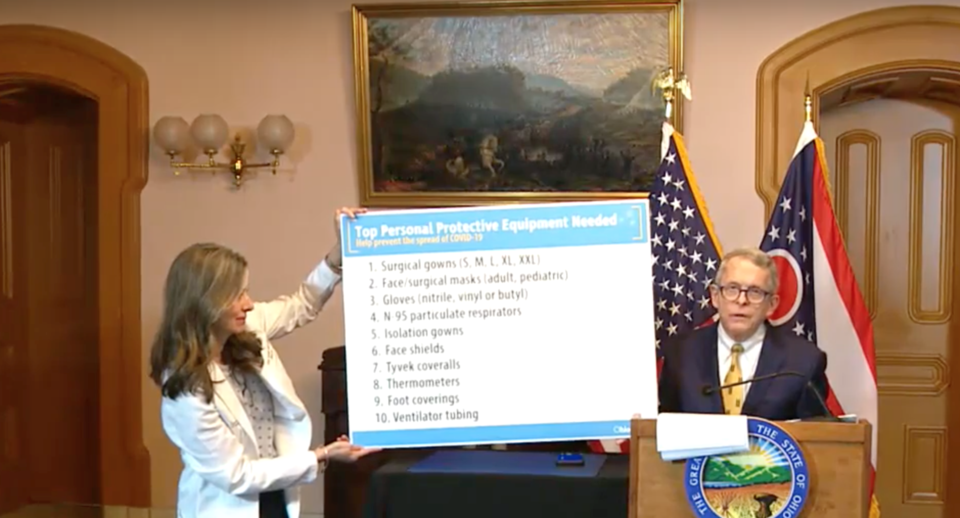 Gov. Mike DeWine and Dr. Amy Acton display a list of medical items they are asking the public to make or donate to the state.

COLUMBUS — Gov. Mike DeWine on Saturday made several appeals as the coronavirus crisis continues in the state and across the country.

He appealed to the federal Food and Drug Administration to approve a process designed by an Ohio lab that will allow it to sterilize a potential hundreds of thousands of medical masks a day.

"We’ve been on the phone with the FDA and this is a public appeal. Please do this. It really is truly a matter of life and death. We need to protect our people who are risking their lives every single day," he said.

The governor and his health director, Dr. Amy Acton also asked private labs such as LabCorp and Quest to keep the state apprised of their coronavirus testing, suggesting testing numbers are lagging in part because of a lack of reporting by private labs.

And DeWine asked everyone — anyone — who can make or donate any of a "top 10" list of medical equipment to email the state at together@governor.ohio.gov.

Though Ohio hospitals have been conserving personal protection equipment known as PPE and Ohio has received its portion from the national stockpile, "we need a lot, lot more," he said. "If anyone can make these or thinks they can make these or needs specifications, email us."

Ohio and the Mahoning Valley's confirmed cases and deaths ticked up on Saturday, but health officials said they are preparing for a wave of cases they predict will start intensifying for hospitals in about two weeks. The modeling the state is following currently predicts cases will peak at about 10,000 a day in mid-May. Acton said it does appear that actions people are taking in the state now to stay at home and physically distance from one another appear to be working to slow the spread, and that 10,000 cases a day is far lower than it would have been otherwise, likening it to an approaching, but weakening hurricane.

"We’re making the hurricane not a four or a five but a three or a two," she said, referring to effort to "flatten the curve" on the chart that shows potential coronavirus case rates over time.

"I’m saying large numbers to you and I know they sound scary ... but for the rest of us what it is saying is: 'We are flattening the curve in Ohio.' Our curve would had been much steeper had we not acted a couple of weeks ago."

Other updates on the coronavirus crisis in Ohio, the Valley and elsewhere:

• DeWine is asking churches not to hold in-person services, as some continue to do, even though the state is not legally barring them from doing so. "We’re not going to tell you not to do it but it really is not a wise thing. ... It’s a very real risk and not only to your members but to everyone else in the community,” he said.

• Ohio Public Broadcasting will start airing programming to help children learn at home. The programming will air all day starting on Monday and is targeted to all grades.

• President Trump on Saturday floated the idea of quarantining northeastern states including New York, New Jersey and Connecticut that have been hard hit early by the virus. It's not clear Trump has the power to do that.