“They were looking for some security and stability in the law," said Lt. Gov. Jon Husted. "House Bill 606 provides that predictability and security. If businesses act responsibly, they will be protected under Ohio law.”
Sep 15, 2020 10:08 AM By: Justin Dennis 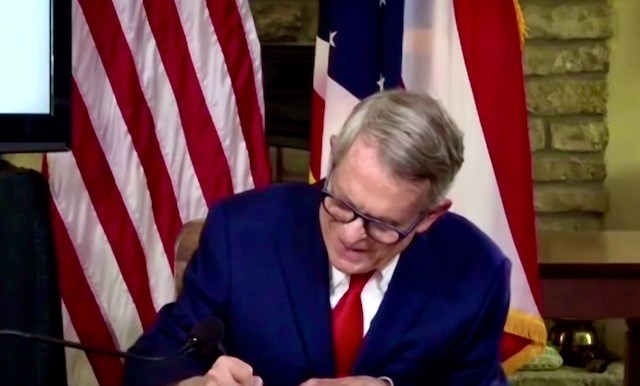 Local Democrats, however — all of whom voted against the measure — said House Bill 606 sides with big business over the average citizen and that the state "should never close its doors to the courthouse."

HB 606 temporarily shields individuals, businesses, schools, health care providers and other entities from tort liability in incidents of COVID-19 exposure or transmission through Sept. 30, 2021. Ohioans who contract coronavirus at an establishment can’t sue unless that establishment is proven to have acted recklessly in spite of new pandemic restrictions.

Lt. Gov. Jon Husted, during a Monday afternoon press briefing featuring DeWine’s signature, said those entities are used to complying with health and safety regulations — but not used to “doing it on the fly during a pandemic.”

“They were, early on, concerned because we didn’t know exactly what this virus was in our lives; we didn’t know what regulations were the best ones. They changed from community to community, state to state,” he said.

“They were looking for some security and stability in the law. … House Bill 606 provides that predictability and security. If businesses act responsibly, they will be protected under Ohio law.”

The bill removes all responsibility from businesses and premises owners to keep the public safe from coronavirus exposure and declares orders and recommendations from the governor’s office or counties and municipalities and their health departments create no new legal duties in regard to tort liability.

As of July, at least 12 state legislatures including Ohio’s have worked to enact a similar law. Ohio’s law takes effect retroactively to March 9, when DeWine declared a state of emergency in Ohio, and extends through Sept. 30, 2021.

The General Assembly is aware that lawsuits related to the COVID-19 health emergency numbering in the thousands are being filed across the country. Ohio business owners, small and large, as they begin to re-open their businesses are unsure about what tort liability they may face.

It also is a fact that recommendations regarding how best to avoid infection with COVID-19 change frequently, and such recommendations are often not based on well-tested scientific information. For example, the [U.S.] Centers for Disease Control and Prevention for the first eight weeks of the COVID-19 health emergency recommended that members of the general public not wear masks since most masks are ineffective in protecting individuals from viruses. The CDC then reversed its recommendation and started encouraging members of the general public to wear masks in public places. Ohio businesses need certainty and consistency to enable them to reopen.

The General Assembly is further aware that businesses and premises owners have not historically been required to keep members of the public from being exposed to airborne viruses, bacteria and germs. In Ohio, it has been the responsibility of individuals going into public places to avoid exposure to individuals who are sick. The same is true today: Those individuals who decide to go out into public places are responsible to take those steps they feel are necessary to avoid exposure to COVID-19, such as social distancing and wearing masks.

Ohio Senate President Larry Obhof of Medina, R-22nd, said Monday the bill has been a major priority for his chamber over the last several months. He said the bill offers public and private entities the certainty “to know they can go back to work, and do so safely, and not have to worry about years and years of frivolous litigation.”

In regard to Mahoning Valley legislators, the final House and Senate votes on HB 606 were cast along party lines.

State Rep. Michele Lepore-Hagan of Youngstown, D-58th, was the only local House representative to vote against the bill when it was initially introduced.

She said she voted against the final iteration of the bill — which removed House amendments to classify COVID-19 as an occupational disease, potentially entitling some frontline workers to workers’ compensation claims — because she feels it favors big businesses over the average citizen’s right to justice.

“We just have to make sure people are protected. We must not be treating our vulnerable people in our communities as second-class citizens when they have the right to petition the courts,” Lepore-Hagan told Mahoning Matters Monday. “We should never close our doors to the courthouse.”

Conversely, state Rep. Al Cutrona of Canfield, R-59th, who voted in favor of HB 606 — but against removing the aforementioned frontline workers clause — said it’s time the Valley felt a “sense of normalcy” again.

“I think this is a great step in the right direction for all Ohioans,” he told Mahoning Matters Monday. “We need to do everything we can here in the Valley to ensure that we can operate with the sense of normalcy and to protect our business owners, protect our health care workers and protect our schools.

“That’s what we need to do right now in the Valley is push forward … so that we’re not living in a constant state of fear of lawsuits or anything of that nature.”

Tom Humphries, president and CEO of the Youngstown-Warren Regional Chamber, said he thinks the law will have a warming effect on local employment in the coming months.

“I do think it’s significant. I think a lot of our smaller businesses and, frankly, larger businesses have been cautious in how far they extend themselves, as far as the risk,” he said. “With this, it gives them the confidence they’re not going to have to be dealing with frivolous lawsuits. I think it’s a strong move in the right direction.

“There’s a lot of concern we’ve heard over the last four to five months … even when we come out of this, people were scared to death they were going to get sued.”

The Ohio Chamber of Commerce was one of almost two dozen state organizations — representing the retail, health, school and municipal spheres — that voiced support for the law Monday.

“Ohio businesses stepped up when asked to help with this pandemic crisis and we are pleased that the Senate and House, along with the governor, have acted to help protect jobs and our economy,” said Andrew Doehrel, Ohio Chamber of Commerce president.

“In a time of uncertainty, Ohio’s educational leaders are working tirelessly so that our children can learn in safe, supportive environments,” he said in a release. “HB 606 provides additional protections for Ohio’s schools as they seek to return students to the classroom and to as much normalcy as possible. Thank you for your sensitivity to the countless challenges our schools are facing.”

The Ohio Education Association, the largest teachers union in the state, came out against the first iteration of the bill in mid-August. President Scott DiMauro told Mahoning Matters Monday said HB 606 seemed unnecessary, as establishments are already protected from such litigation when acting in good faith.

“That said, we fully believe that local school districts and universities have an obligation to protect [the] health and safety of educators and students. We’re going to continue to advocate for that,” he said. “I think we still need to see how things are going to play out. If school districts don’t follow health guidance, then we’re going to do everything we need to do to hold them accountable and we will represent our members in legal actions when it’s appropriate.”

With the pandemic’s nature still up to interpretations both medical and constitutional, Samuel Adu-Poku said he feels the state needs to draw a line between public safety and personal rights — and it’s not here.

The Youngstown State University art professor, who also serves on the Ohio Education Association Board of Directors, said folded businesses and other organizations can be brought back — but human life cannot.

“Some businesses will take advantage of this. They’ll lower the bar in terms of what they need to do to protect lives,” Adu-Poku said. “I still feel that no matter how they try to spin to make it sound like a good law, good legislation, I feel it’s a slap in the face of the average Ohioan.

“Even without [HB 606] it wasn’t easy for people to be able to win cases like that against [businesses]. Now, it will be nearly impossible for anyone affected to get redress.”

Here are other recent coronavirus-related developments in the state and region:

• According to the latest figures Monday from the Ohio Department of Health, the state is reporting 131,235 confirmed cases of the coronavirus. There have been 2,960 confirmed or suspected cases in Mahoning County; 1,817 in Trumbull County; and 1,897 in Columbiana County.

• Statewide, there have been 4,126 confirmed deaths, including 274 in Mahoning County; 127 in Trumbull; and 71 in Columbiana. Mahoning County's 274 reported COVID-19 deaths on Monday was fifth among Ohio's 88 counties; Cuyahoga County had the most with 622.

• When Stambaugh Auditorium presents the 1925 silent film "The Phantom of the Opera" with organ accompaniment Oct. 25, the event will have a new look. A smaller-than-usual audience will watch it live because of pandemic requirements, but the show will also be live-streamed for other viewers.

• Yellow Brick Place, a cancer wellness organization, has received a $7,500 grant from the Arnett Family, Kennedy Family and First Place Community funds held at the Community Foundation of the Mahoning Valley.

• According to the Pennsylvania Department of Health on Monday, there are 145,063 COVID-19 cases in the state which have led to 7,869 deaths. The state said the recovery rate is 82 percent. There have been 656 confirmed or suspected cases in Mercer County and 13 deaths; 487 cases in Lawrence County and 21 deaths.

• Hotel job losses in Pennsylvania will number 105,340 this year, out of a total of 234,088 hotel jobs in the state, according to projections by the American Hotel & Lodging Association. Likewise, hotel job losses in Ohio will number 86,570, out of a total of 192,378 jobs. Overall, more than two-thirds of U.S. hotel workers are unemployed or furloughed, according to related studies by Oxford Economics.