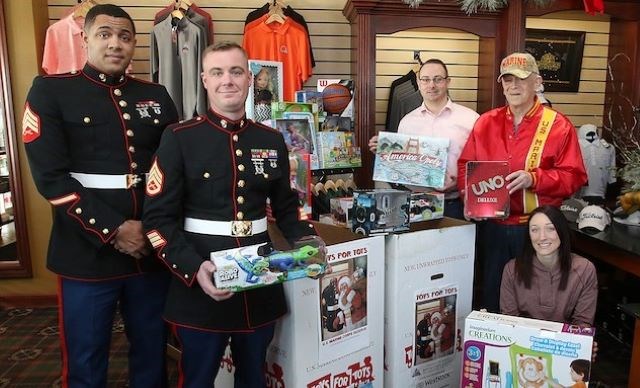 Sgt. Chaz Lewis, Staff Sgt. Andrew Gogulski, Philip Faraglia of Kennsington, retired Marine David Dampf and Jessica Ferraro, also of Kennsington, show off some of the items collected for the annual Marine Corps Toys for Tots campaign at Kennsington Golf Club in December. Ohio was ranked the fifth most charitable state in a recent study. (Photo by Robert K. Yosay)

Ohio residents have a strong desire to collect and distribute food and clothing for people in need and instill community service into the high school experience, a recent study concluded.

WalletHub, a personal finance website, recently analyzed how states across the country stacked up against one another in giving of one’s resources — including time and money. Ohio was ranked the fifth most charitable state.

Researchers with WalletHub dug into a number of pieces of data, lumping the information into two categories — the first being volunteer and service, the other described as charitable giving. Ohio ranked Nos. 11 and 9, respectively.

However, more granular analyses within both categories were weighted differently, which pushed Ohio into its single-digit position within WalletHub’s analysis.

The Buckeye State placed in the top 10 in five specific metrics. One in 3 Ohio residents collect and distribute clothes — a distinction that placed the state at No. 1. The state also notched a tie for first place for having regulations deemed friendly to charities.

Elsewhere in the analysis, Ohio was ranked second for a statewide requirement that school districts implement a community service requirement for students to graduate high school.

Also noted in the report was a third-place rank for collecting and distributing food. Reportedly, 41.25 percent of Ohio’s population takes part in some aspect of serving people in need.

Additionally, Ohio landed in the No. 10 spot for a metric looking at how many people within the state use search engine platform Google to explore charitable donation options.

On the other end of the spectrum, Ohio landed in the bottom 10 in one specific metric — share of income donated. According to WalletHub, residents across the state, on average, donate 1.1 percent of their annual income to charity.

WalletHub’s recent analysis dovetails into the cultural norm of charitable giving amid the holidays and at the end of the year.

In its recent report, researchers with the website gathered feedback from academics and experts tuned in to charitable organizations and the economics of philanthropy.

Robert Fischer, associate professor and co-director of Case Western Reserve University’s Center on Urban Poverty and Community Development in Cleveland, was among the experts who weighed in on the issue.

While the economy has been good in recent years, the scenario, Fischer said, can be a double-edged sword for nonprofits.

“In an economy with lower unemployment rates, nonprofits may have trouble competing for staff, especially since the compensation they offer is often lower than for-profit employers,” Fischer said in the WalletHub report.

Challenges for nonprofits also exist elsewhere, Fischer said, including within the walls of federal and state government.

The most charitable state of 2019, according to WalletHub, is Minnesota, while the least charitable is Arizona.

Ohio outpaced all of its neighbors in the recent analysis. Pennsylvania was No. 6 overall, Indiana was No. 22, Kentucky was No. 28, Michigan was No. 30 and West Virginia was No. 42.