The week of June 21 was the first week the state saw increasing hospital utilization in more than two months, leading officials to increased testing doesn't account for the surge in cases.
Jun 30, 2020 3:52 AM By: Jess Hardin 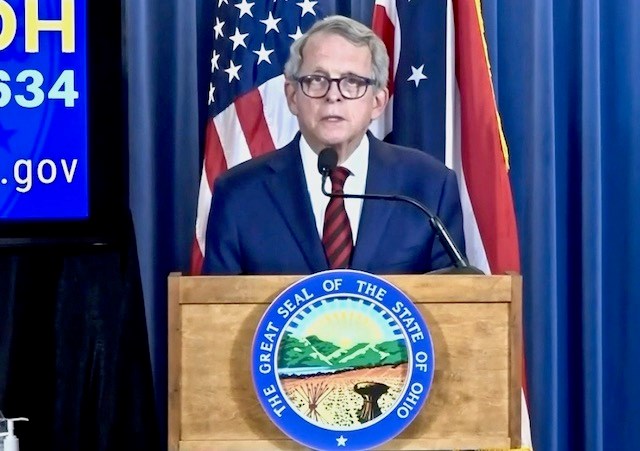 COLUMBUS — At least 10 states experiencing spikes in COVID-19 cases are pausing or rolling back reopenings in an attempt to contain the virus, but Ohio is not one of them.

That trend reversed sharply the week of June 13, when Ohio saw an increase of 2,874 cases in one week. Last week, the state reported 4,391 new cases — the most new cases the state has added in one week.

It's not solely a reflection of increased testing. During a state coronavirus briefing, Gov. Mike DeWine explained the week of June 21 was the first week the state saw increasing hospital utilization in more than two months.

Regardless, Ohio's reopening is moving ahead.

During a state coronavirus briefing Monday, DeWine announced nursing homes will be permitted to reopen for outdoor visitation starting July 20 "so long as safety standards are met." He also teased a reopening update on schools for Thursday.

"If we want to be able to go out and live our lives, this mask is a symbol of freedom," said DeWine. "If we get 75 to 80 percent of the people who are out in public who are wearing this mask, we are going to see these numbers get better."

Lt. Gov. Jon Husted chimed in: "We all can just do these small things to make a difference. We’re not asking for big sacrifices just asking for everyone to do their part."

"It's a good step. It's a real positive step," he said. "You have people who are isolated in their rooms for many, many months. Not to have regular contact with their family members or significant others or their friends has to have a huge burden on them from an emotional standpoint."

Even so, Saulitis urged Ohio nursing home visitors to consider the level of risk they present by visiting a nursing home — perhaps by asking themselves how exposed they've been to coronavirus in the past 14 days. He also suggested visitors consider getting tested for the virus before visiting.

"There's going to be an initial emotional reaction: 'Great, I'm going to be able to visit my [relative].' ... People who are going to take advantage of those visits need to think ahead a little bit. The most important person in that picture is the nursing home resident.

"The consequences of COVID entering [a nursing home] from the outside are devastating."

Meanwhile, states on a similar course have scaled back reopening plans. Over the weekend, Florida announced it will shut down bars after a record surge in coronavirus cases. Texas bars will also close again while elective surgeries have been suspended in four counties to preserve hospital bed availability.

Across the Pennsylvania border, Allegheny County reported nearly 100 new cases on both Saturday and Sunday after seemingly having contained the virus. On June 23, only 8 new cases were reported. In response to the spike, county executive Rich Fitzgerald and health department director Dr. Debra Bogen announced bars will close for on-site alcohol consumption beginning today (June 30).

Mahoning County Public Health officials didn't specify which metrics they're following to gauge the local trajectory of the pandemic, but said, "we continue to follow the numbers for Mahoning County but this area has not seen a significant increase."

The county's health department is taking the lead from the state's Responsible Restart Ohio plan and is not currently considering any locality-based restrictions.

Erin Bishop, Youngstown City health commissioner, said once the state updates restriction guidelines, city health officials will discuss them with their counterparts at the county level.

Health officials from Trumbull and Columbiana counties could not immediately be reached Monday to comment on their policy-making decisions.

DeWine has indicated the state will take a county-by-county approach to manage spikes in coronavirus cases. Earlier this month, DeWine highlighted surges in positive cases in southwest Ohio.

During Monday's briefing, DeWine identified Hamilton and Montgomery counties. Since the beginning of June, cases in Hamilton have doubled. The state has responded with pop-up testing sites and increased National Guard assistance.

"We control our future," said DeWine. "We do not want our future to be what we’re seeing in Texas."

Since flip-flopping on whether to make public mask-wearing mandatory, the DeWine administration has struggled to incentivize this basic, yet effective measure. Even Republicans in the Ohio House — DeWine's party — refuse to comply.

In late May, Ohio Republicans voted down a measure to require masks for lawmakers and staff. The following week, Rep. Nino Vitale — who made anti-Semitic comments about former state Health Director Dr. Amy Acton — introduced a bill to ban mask requirements.

"My persuasion isn't good enough," DeWine admitted Monday. "I continue to work on it."

• According to the latest figures Monday from the Ohio Department of Health, the state is reporting 47,524 confirmed cases of the coronavirus. There have been 1,736 confirmed cases in Mahoning County; 824 in Trumbull County; and 1,202 in Columbiana County.

• Statewide, there have been 2,575 confirmed deaths, including 228 in Mahoning County; 61 in Trumbull; and 59 in Columbiana. Mahoning County's 228 reported COVID-19 deaths on Monday was fourth among Ohio's 88 counties; Franklin County had the most with 395.

• The Senate passed legislation proponents say strengthens Ohio’s open meetings law. Under Senate Bill 293, residents may file a complaint alleging a violation of the Open Meetings Law with the Court of Claims. The court can require public bodies to comply with the law.

• According to the Pennsylvania Department of Health on Monday, there are 85,988 COVID-19 cases in the state which have led to 6,579 deaths. The state said the recovery rate is 78 percent.There have been 130 cases in Mercer County and 6 deaths; 99 cases on Lawrence County and 9 deaths.

• The City of Youngstown announced Monday that it has canceled its Fourth of July fireworks celebration. Officials said the move would ensure "the health of the citizens of Youngstown is of the utmost importance.”