State Rep. Gil Blair, a Democrat, was appointed in May 2019 after former 63rd district Rep. Glenn Holmes stepped down. His Republican challenger, Mike Loychik, is a small-business owner from Cortland.
Oct 29, 2020 4:11 AM By: Justin Dennis 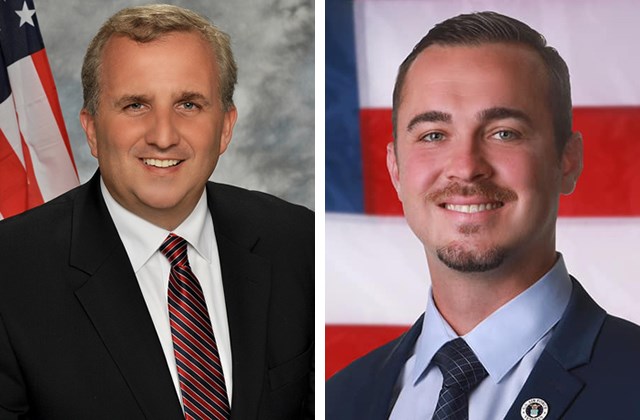 The incumbent state representative for Ohio House’s 63rd district is a Democratic appointee now running for his first full term in the state legislature.

GIl Blair, 50, of Niles, is a former eight-year Weathersfield Township trustee and former five-year prosecutor for the City of Warren. He has also practiced law for a total of 25 years.

He earned his bachelor’s and law degree from the University of Akron.

Blair joined the legislature on appointment in May 2019, after former 63rd district Democratic state Rep. Glenn Holmes of McDonald stepped down to serve as a member of the Ohio Parole Board.

“At that point in time I was seeing folks that were kind of forced to transfer to other areas,” he told Mahoning Matters. “Both them and their parents had worked at General Motors Lordstown. It was sad to see grandchildren being separated from grandparents. In some cases, there were couples who may not have been married but were getting different [work] assignments.

“There was just a lot going on and I thought I could be of help. … With my background as a prosecutor and an attorney — obviously, with a law-making body, that’s an asset.”

If elected to his first full term, Blair said he’ll look to promote economic development in his district, as well as health care legislation to make necessary medications affordable and to prevent insurance exclusions for Ohioans with pre-existing conditions. He’d also legislate for “effective” school funding, early identification of learning impediments and new framework of support services for low to moderate wage-earning families, according to his responses in a Mahoning Matters candidate survey.

“[Voters are] looking for us to seek opportunity, protect what we have and also, as a legislator, take the steps necessary to protect them and their families in regard to things like health care, education and veterans’ issues,” Blair said.

The COVID-19 pandemic also exposed weaknesses in the state’s supply chain, said Blair, who serves on the House Agriculture and Rural Development Committee. One way he’d look to help is by linking local meat suppliers with chain stores in their area — like his favorite, Panera. They’d be able to cover for larger suppliers forced to shut down due to coronavirus outbreaks, he said.

Blair has introduced six bills in his 1 ½ years in the House, mostly emergency measures in April of this year, in response to the COVID-19 pandemic. One which provides civil immunity to municipalities or counties due to incidents involving private hospital police departments was passed by the House; another allowing township police officers to enforce traffic offenses on interstate highways was informally passed but re-referred to committee.

But Blair said the job extends beyond legislating. When GM Lordstown closed, he and neighboring 64th district Democratic state Rep. Mike O’Brien of Warren collaborated on a letter campaign to the White House on behalf of the displaced workers, which resulted in meetings with the president’s office and the U.S. Department of Urban Housing and Development, he said.

Blair, like other local legislators, echoed the promise of new industrial opportunities like General Motors’ incoming electric vehicle battery plant in Lordstown and Lordstown Motors Corp., but said he sees a shortage in housing fit for those new workers.

“I’ve been working with folks to be sure as these new plants open that we can get … housing that is tailored to the incomes of people who will be working in these new plants,” he said. “I really feel that I’ve been working very hard for the district. I think we’re seeing results. It’s amazing to see the Lordstown skyline dotted with construction cranes and knowing there’s billions of dollars coming in.”

Blair’s Republican challenger, Mike Loychik of Cortland, did not respond to requests for an interview, nor did he respond to a survey sent by Mahoning Matters to all local candidates.

Loychik is a small-business owner who also served eight years in the military in a leadership role, according to responses he provided to a League of Women Voters survey.

Loychik earned his Bachelor’s degree in environmental management from Cleveland State University and is currently pursuing a Master’s in occupational safety and health, also at CSU. He also earned an associate’s degree in aviation maintenance technology from the Community College of the Air Force.