The measure was inspired by an Ohio teen disqualified from a cross-country race because she was wearing a hijab without a required waiver.
Jun 9, 2021 4:59 PM By: Associated Press 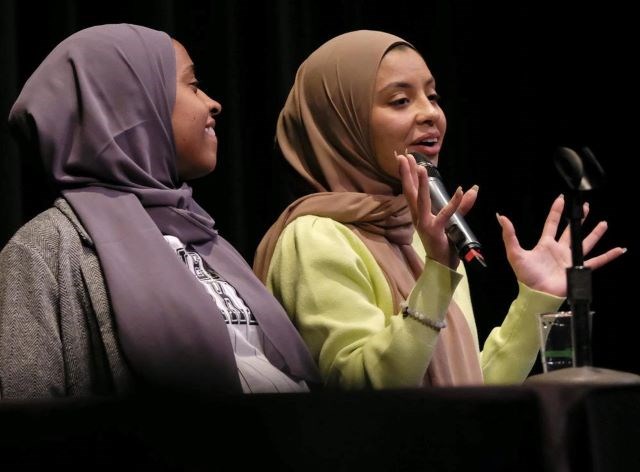 Noor Abukaram, right, speaks during a panel during the Let Noor Run Kickoff Event at Lourdes University's Franciscan Center in Sylvania, Ohio, on Jan. 24, 2020. The Ohio Senate approved legislation Wednesday to protect athletes' religious expression. The bill was inspired by Abukaram, an Ohio teen disqualified from a cross-country race for wearing a hijab without a required waiver. (Kurt Steiss | The Blade via AP)

COLUMBUS (AP) — Schools and school sports regulators could no longer require advance waivers or otherwise restrict participants’ religious apparel unless it causes a “legitimate danger” for fellow competitors, under legislation approved by the Ohio Senate on Wednesday.

The measure was inspired by an Ohio teen disqualified from a cross-country race because she was wearing a hijab without a required waiver. Bill sponsor Sen. Theresa Gavarone, a Bowling Green Republican, praised the support the legislation received across political parties and religious affiliations.

Gavarone researched the legislation after learning of the experience of Noor Abukaram, a runner at Sylvania Northview in suburban Columbus who was disqualified over her hijab in 2019.

At the time, Ohio High School Athletic Association rules banned most head coverings and caps unless competitors got waivers in advance if they needed exemptions for religious reasons. Her coach has acknowledged making a mistake by not getting a waiver but indicated he hadn't thought it was needed because it hadn't been an issue at prior races.

OHSAA has since changed its rules to let referees approve use of religious head coverings if a coach asks before a competition, without a formal waiver.

Despite that change, Abukaram continued having problems with race officials as recently as this fall, making the legislation necessary, Gavarone said.