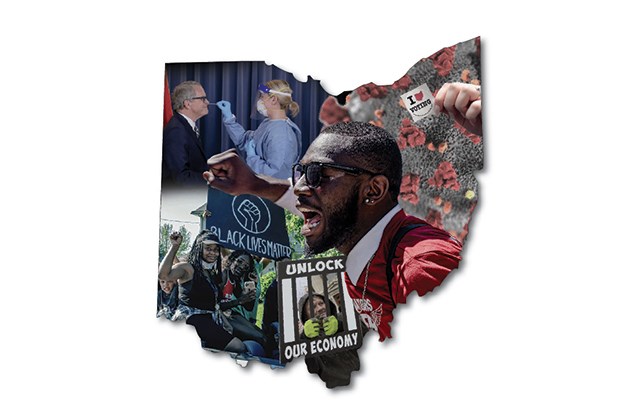 Ohioans are exhausted during the final run-up to the 2020 presidential election.

They’re worried about COVID-19, about where the United States is heading, about the vote, both the mechanics of how it will work — or won’t — and about who will ultimately win.

Most are avoiding any face-to-face political conflict outside their pandemic bubbles of friends, people who pretty much agree with them, anyway.

And all the while, they say they’re drowning in a never-ending flood of news, yet they still can’t find the information they need and trust, like what the candidates will do if elected.

“I would like to have a peaceful nation without drama 365 days a year. I’m tired of it,” Northeast Ohio resident Sheilah Smith said during a series of regional conversations with Your Voice Ohio, a project that allows journalists to listen in to voters’ conversations across the Buckeye State.

The goal of this series of five meetings — which happened over Zoom during the first full week of October — was to find out how Ohioans think we could move forward after the election, no matter who is president.

Participants had the option of remaining anonymous in articles about the meetings so they could speak freely about hot-button issues without fear of public retribution.

Journalists representing more than 50 news organizations in the Your Voice Ohio collaborative including Mahoning Matters suggested the topic as they watched political divisions grow wider and deeper across their communities and the nation. Just as importantly, Ohioans expressed the same concern during 15 other conversations that happened over the summer.

In all, 20 voters met in five smaller groups — from two to five people — that represented where they live: central, northeast, northwest, southeast and southwest Ohio. The ages of voters involved ranged from a 22-year-old first-time voter from Central Ohio — who was too young by a month to vote in 2016 — to an 82-year-old man from Southwest Ohio who still recalls the pride he felt casting his first vote in 1956 when incumbent President Dwight D. Eisenhower beat Adlai Stevenson.

Most seemed to have made up their minds and were voting for President Donald Trump or former Vice President Joe Biden. But there were some undecided voters, too, including a Southwest Ohio woman who voted for President Barack Obama before switching sides and voting for Trump in 2016. The groups also included an unwavering libertarian and a man who said he and many of his friends probably wouldn’t vote because they’ve never seen a president impact the problems in their day-to-day lives.

There were no fights, nor even harsh words during the five 2-hour virtual meetings.

Often, voters looked for — and sometimes found — common ground on everything from the economy to what they hope will happen after the election, when the real work begins.

Unity is what voters craved most.

They want nasty fights and bickering to stop among politicians — and among themselves.

“Everybody should treat others as they would want to be treated,” said Jinnifer Trubey of Toledo. “That should start with the leader of the free world, and that should trickle down.”

They also want the economy to bounce back with good-paying jobs, but acknowledge there’s a big, dangerous and unpredictable obstacle standing in the way: COVID-19.

The virus has already infected more than 8 million Americans and left 218,000 dead. Until the pandemic can be tamed or better managed, voters fear little else can be accomplished.

“I’m a conservative, too, but just the opposite of what a conservative should be (on the) pandemic,” said Faith Williams, who lives in Northeast Ohio.

Williams said “it felt like states were pitted against each other,” which prevents the U.S. from managing the crisis as well as other countries have.

“Everybody needs to be on the same page,” she said.

Ohio: The state we’re in

But whatever happens nationally, many Ohio voters want to find ways to come together. A few have lost friends over political disagreements, or avoided talking to friends and family who disagree with them because they know it could lead to a fight.

“Hopefully when the whole country's temp comes down, it will be easier to have conversations,” said Cheryl Gordon of Southeast Ohio.

Two voters — Michelle MacCutcheon of Southwest Ohio and Mikel Grenier of Northwest Ohio — offered their experience reaching across the political and social chasms.

It can start, they said, with a shared purpose and respect.

“I can find common ground with anyone — except trolls,” said MacCutcheon, a former volunteer coordinator of Ohio’s Libertarian party.

MacCutcheon knows her presidential candidate, Jo Jorgensen, is going to lose, so she’s looking forward, trying to build new alliances to get what she wants done.

“I already reached out to the Green Party in my area for a meeting,” she said. “Criminal justice reform. No bailouts or subsidies. We can immediately connect on those and move forward.”

Grenier, a church receptionist, was long hesitant to engage in political conversations but is engaging more using life lessons learned as a member of the LGBTQ community.

“I work with somebody who does not believe in some of the exact same issues as I do,” Grenier said. “I go out of the way to make sure they know their opinion is just as important as mine.

“We may not agree,” Grenier said, “but I still love you as a person.”

Ray Chorey, who lives in Southwest Ohio, said an old leadership tenet may apply to re-building bridges between people who disagree: You should seek to understand to be understood.

People coming from different directions may still disagree on some points, but they may find they agree on others, he said.

Amanda Garrett is a reporter for the Akron Beacon Journal and can be emailed at agarrett@thebeaconjournal.com.

Want to volunteer for a future dialogue and receive $125 for two hours? Register at the Your Voice Ohio Election 2020 website.

About this project: This is one in a series of stories on issues Ohioans say are most important in this election year. More than 50 news outlets are collaborating in the project under the umbrella of Your Voice Ohio, the nation’s largest sustained, statewide news media collaborative. In five years, Your Voice Ohio has brought more than 100 journalists together with more than 1,300 Ohioans for discussions on addiction, the economy and elections. Your Voice Ohio is managed and coordinated by the Jefferson Center for New Democratic Processes, a nonpartisan, nonprofit civic engagement organization. The project is funded by the John S. and James L. Knight Foundation, the Democracy Fund and Facebook. The Jefferson Center for New Democratic Processes designs and facilitates the dialogues and digital forums. Retired Akron Beacon Journal managing editor Doug Oplinger directs the media work and can be reached at doplinger@yourvoiceohio.org.