About eight times as many coronavirus variants are being discovered now in the state than about a month ago, said ODH's Dr. Bruce Vanderhoff.
Apr 8, 2021 2:51 PM By: Mahoning Matters staff 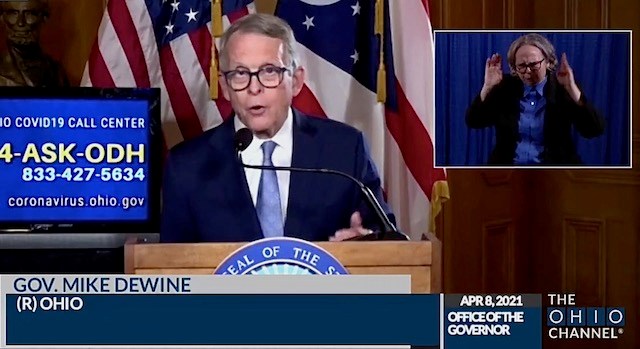 CEDARVILLE — Ohio health officials expect a coronavirus variant first seen in the United Kingdom will in the coming weeks become the dominant strain in the state.

Scientists in the state are analyzing samples from up to a third of all positive coronavirus tests for genetic indicators of the new variants, said Dr. Bruce Vanderhoff, Ohio Department of Health's chief medical officer.

About eight times as many variants are being discovered now in the state than about a month ago, he said.

Three variants account for the vast majority of all the genetic variances found in Ohio samples, and the UK strain, known as B117 has "the lion's share," Vanderhoff said. The strain is known to be more contagious and more deadly, he said.

Though the governor promised to lift all health orders once the state reached 50 new cases per 100,000 people over two weeks, the metric is not moving "in the direction we want," Gov. Mike DeWine said Thursday.

Since yesterday, there have been 108 new cases in the Valley: 40 in Mahoning County; 53 in Trumbull; and 15 in Columbiana.

"While we're going in the wrong direction and certainly going away from our goal of 50 [new cases], we're not seeing the kind of runaway growth we've seen in the fall," DeWine said. "We can still turn this around if we continue to get people vaccinated."

Columbiana County last month was downgraded on the state’s public health alert system, and was no longer considered to have a high incidence of coronavirus transmission under federal guidelines. This week, however, it's reported more than 100 new cases per 100,000 people over two weeks, making it a high incidence county, according to ODH.