Ohio's COVID-19 risk map worsens from last week, though Trumbull's risk is down

About 10 million Ohioans, or 85 percent of the state's population, are living in an area with high risk of coronavirus transmission, Gov. Mike DeWine said Thursday.
Oct 16, 2020 3:52 AM By: Mahoning Matters staff 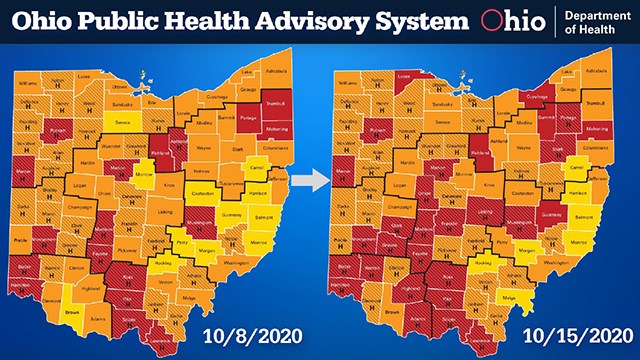 Ohio on Thursday broke its record of new coronavirus cases tallied in a single day — for the third time in the past week.

Of Ohio's 88 counties, 29 are reported this week at Level 3 "red" alert status, including Mahoning; 52 are at Level 2 "orange" alert, including Trumbull and Columbiana; and only seven are at Level 1 "yellow" alert.

In Trumbull County, the seven-day average of new cases improved since last week. The average started to turn downward after Sept. 27, according to the Ohio Public Health Advisory System map, putting it below the risk threshold it met last week.

Mahoning County, which was upgraded to Level 3 "red" alert for the first time last week, this week met the same four risk indicators, along with a fifth:

Sixty-three Ohio counties are also classified as having a high incidence of coronavirus cases, according to the state map, meaning they have more than 100 cases per 100,000 residents, according to U.S. Centers for Disease Control and Prevention guidelines.

Mahoning, Trumbull and Columbiana counties don't meet that threshold this week, but neighboring Portage and Stark counties do, and both are also at Level 3 "red" alert status.

DeWine said about 10 million Ohioans, 85 percent of the population, are living in an area with "a high risk of community transmission."

Coronavirus test positivity in the state also continues to climb from its all-time low point. The seven-day average of positive tests on Thursday was 4.2 percent, up from the low point of 2.7 percent on Sept. 24.

On Thursday there were 1,042 hospitalized COVID-19 patients reported at Ohio hospitals. On Sept. 20, there were 563, according to the governor.

In describing the reasons for the spread, DeWine said local health departments have noted less and less mask compliance.

"People are complacent when they're comfortable," said DeWine, explaining coronavirus has been spreading at small gatherings of families and friends.

"The only way ... we can beat this virus back is to follow the prevention methods we have been talking about since the beginning of the pandemic,” he said. “Stay home when you are sick. Social distance. Wear a mask. Always.”

"I'm sorry we didn't know more about universal masking in March," said Margolis. "We know so much more about masks in October. We know about masks working."

• Youngstown City Schools CEO Justin Jennings during his monthly update said instruction will remain online-only for now, a decision on several factors. Forty percent of students live with grandparents, who face a higher risk in contracting COVID-19, he said. The district is also developing a plan to transport students for in-person schooling and noted the district's limited bus fleet is currently being used by private and parochial schools.

• Second Harvest Food Bank of the Mahoning Valley will host another Traveling Food Pantry food distribution at the Canfield Fairgrounds at 1 p.m. Friday. Recipients will enter the fairgrounds through Gate 8 and exit through Gate 5. Recipients’ trunks must be open and clear of all belongings, and windows must be rolled up. Recipients are not to exit their vehicle for any reason.

• Trick-or-treating will continue as normal for most of the Mahoning Valley this Halloween despite the CDC guidelines which list the tradition as a high-risk activity. A few cities have canceled traditional trick-or-treating or created alternative plans.

• Nearly 8.1 million Ohioans are signed up to vote in the November election, a near record, the latest figures from Secretary of State Frank LaRose show. Ohio has never seen more registered voters, other than in 2008, when Democrat Barack Obama faced Republican John McCain.

• Medicare enrollment opened Thursday with a host of new choices for Ohio consumers to make. Due to the COVID-19 pandemic, most plans prioritize telemedicine options, according to analysts. The enrollment period for coverage starting Jan. 1 runs through Dec. 7. More than 60 million people are Medicare recipients, including 2.3 million Ohioans.

• According to the Pennsylvania Department of Health on Thursday, there are 177,520 COVID-19 cases in the state which have led to 8,432 deaths. The state said the recovery rate is 80 percent. There have been 862 confirmed or suspected cases in Mercer County and 25 deaths; 681 cases in Lawrence County and 24 deaths.

• Nearly 900,000 American workers filed new claims for unemployment benefits last week, an increase of 53,000 new claims from the week prior and a sign that the U.S. economy has a long way to go to recovery.

• In Ohio, 20,090 workers filed initial claims for unemployment benefits last week, according to the Ohio Department of Job and Family Services. Since the onset of the pandemic 30 weeks ago, $6.9 billion in unemployment compensation has been distributed to 821,000 Ohioans.