With no new guidance from above, local officials are engaging COVID-19 on the ground.
Nov 6, 2020 3:52 AM By: Mahoning Matters staff 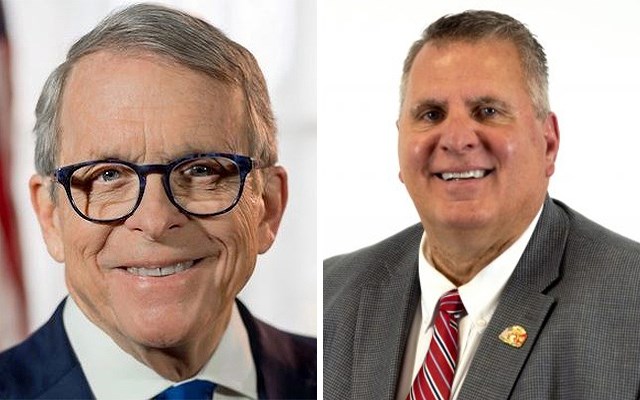 "It is everywhere," Gov. Mike DeWine said Thursday. "We can't run from it. We've got to face it."

Though DeWine suggested executive orders to curtail the virus' spread weren't off the table, he didn't offer any new overtures to right the ship.

Canfield taking it to task

Last week, DeWine said the state would be relying "on the goodwill of the people of the state of Ohio" and that he was urging Ohio mayors and county officials to establish local COVID-19 task forces.

The mayor said he expects the task force to meet every two weeks to consider public messaging campaigns and new, ground-level measures like fines for mask mandate violations, which would be enforceable through the Mayor's Court, and which Duffett said he may ask council to codify.

"From my perspective, if the numbers don't start going down in 44406 ... then that will be something that council and our city manager and our attorney will talk about. I'll propose it. Maybe they'll do it, maybe they won't," Duffett said.

"I think the governor has tried to be positive and put [masks] on the responsibility of the people and I agree with that," the mayor continued. "The president has taken a different tack. I do not agree with the way he's been soft on masks."

That City of Canfield ZIP code has marked 372 COVID-19 cases and 24 deaths to date, according to the Mahoning County Public Health dashboard — the 4th-highest total cases in the county to date and the 3rd-most cases reported in August.

Duffett said he feels other localities should consider establishing their own local measures to stop the spread of COVID-19.

"We're taking it very seriously and we're concerned not only for our residents in the city but our surrounding communities. It is getting worse," he said.

Hanging on the election

When it comes to stemming the virus spread, local health officials' message hasn't changed: put on a mask, social distance, stay home when you're sick and limit the size of gatherings.

"Every time I speak to someone, it’s the same message I give," said Mercy Health Chief Clinical Officer Dr. JIm Kravec. "Really nothing has changed since we started talking about this in the spring."

Kravec identified the statewide mask mandate as crucial to limiting spread of the virus. In Youngstown, Health Commissioner Erin Bishop said the city will continue to push the mask mandate and for people to limit indoor gatherings.

“It’s really in the hands of the people,” Bishop said. “They have to do their part.”

Bishop said she feels people have been following city protocols to wear a mask in public, but she is concerned about indoor gatherings becoming more frequent with colder weather. She said the department is asking people to limit the size of holiday gatherings from what they would typically have.

“We have to continue to stay vigilant on what we're doing,” Bishop said.

Mahoning County this week remained at level 3 "red" alert status under the Ohio Public Health Advisory System map. Bishop said the health department is concerned about the county reaching the fourth and final "purple" alert level, since there are no specific guidelines for what the county should do if that happens.

“We’re all anxious every week if we could go purple,” Bishop said.

Bishop said the city will continue to follow guidelines from DeWine, but the outcome of the presidential election could also signal more COVID-19 guidelines and funding from the federal government.

“We’re either going to have support from above or not,” Bishop said.

The United States for the second day in a row marked more than 100,000 new coronavirus infections, also a new one-day record, according to CNN.

Sixteen states also set new records for COVID-19 hospitalizations, including Ohio, where the 2,075 people who were in a hospital for COVID-19 Thursday was 55 percent higher than it was two weeks ago. The state's 541 ICU patients also beat the previous record from April.

"This virus is flaring up and we have to push it down — the economy depends on it," DeWine said Thursday. "If the virus continues to aggressively spread, people will lose confidence in their ability to safely go to stores, restaurants and other businesses. If we want to keep our economy moving, we must all live with this virus and we must all be more careful."

The U.S. Centers for Disease Control and Prevention project 266,000 Americans will have died of COVID-19 by Nov. 28, CNN reported.

As of Thursday, each of Ohio's 88 counties were considered to have high incidence of coronavirus transmission by CDC guidelines, according to an updated state map — meaning each Ohio county has reported at least 100 new cases per 100,000 people in the last two weeks.

Despite Ohio's now surging cases and coronavirus test positivity returning to pre-summer levels, DeWine has refrained from instituting new statewide restrictions that led to protests and public pushback earlier this year — instead insisting the battle against COVID-19 be fought on the local level.

"Any time you start shutting things down — I'm not saying I won't do that — there are consequences. There are economic consequences, there are mental health consequences," DeWine said Thursday.

Delivering anecdotals Thursday on how the virus is spreading in the state, DeWine again pointed to private, informal gatherings as being the state's main source of new COVID-19 cases:

DeWine told reporters he expects to release guidelines for safely conducting private gatherings ahead of the holiday season.

"I think people need to know how they can do it a lot safer," the governor said. "It does come back to something I said before — that we can do most of the things we've always done. We just have to do them differently."

• YOU Care QUICKmed clinic will open Tuesday at East and Chaney high schools to provide pediatricians to students in Youngstown. The clinics will only be open to students and staff right away and will eventually allow anyone from the city to schedule an appointment.

• Western Reserve Transit Authority and Second Harvest Food Bank of the Mahoning Valley are teaming up to provide relief to residents in Mahoning and Trumbull counties who live in “food deserts.” Officials say there’s a WRTA bus that can get riders to the store in both counties and all rides are free through Dec. 31.

• ONE Health Ohio will be offering drive-thru COVID-19 testing to residents ages 5 years old and older next Nov. 11 at RISE Recovery on Belmont Avenue from 10 a.m. to 4 p.m. Pre-registration is required by contacting the ONE Health Ohio COVID nurse at 330-884-6122.

• The classic ballet "The Nutcracker," normally the Ballet Western Reserve's holiday offering, will be presented in a new way as "A Nutcracker Drive-In" at the Eastwood Field parking area on the big screen Dec. 18-19 at 7:30 p.m and on Dec. 20 at 6 p.m. Tickets cost $45 per car and went on sale on Wednesday at 9 a.m. on the ballet's website.

• According to the Pennsylvania Department of Health on Thursday, there are 220,566 COVID-19 cases in the state which have led to 8,937 deaths. The state said the recovery rate is 75 percent. There have been 1,264 confirmed or suspected cases in Mercer County and 28 deaths; 1,132 cases in Lawrence County and 40 deaths.