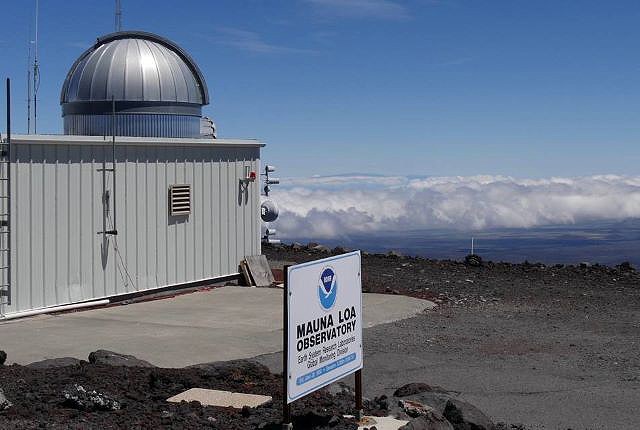 Since 1958, samples of the air have been collected atop a barren volcano in the middle of the Pacific Ocean to track atmospheric carbon dioxide (CO2) levels in the northern hemisphere.

Now, 63 years later, those levels have peaked, despite a more than year-long pandemic that halted much of the human activity responsible for emitting the greenhouse gas.

CO2 averaged at 419 parts per million in May, according to air samples collected at the National Oceanic and Atmospheric Administration’s Mauna Loa Atmospheric Baseline Observatory in Hawaii. In comparison, the average in May 2020 was 417 ppm.

CO2 levels measured in May are comparable to those between 4.1 and 4.5 million years ago, when sea levels were about 78 feet higher than they are today, average temperatures were 7 degrees Fahrenheit higher than pre-industrial times and large forests covered parts of the Arctic now blanketed in ice and snow.

And contrary to what many suspected, the coronavirus pandemic didn’t live up to its band-aid solution potential, although it slowed the burning of fossil fuels used for transportation, electricity, manufacturing and deforestation — among other human activities that spit heat-capturing CO2 into the air.“We ultimately need cuts that are much larger and sustained longer than the COVID-related shutdowns of 2020,” said geochemist Ralph Keeling, leader of the Scripps Institution of Oceanography at the University of California, San Diego and son of Charles David Keeling, who was the first to take on-site measurements of CO2 on Mauna Loa in 1958.

The observatory is “ideally situated” because it sits above the influence of local pollution sources or vegetation, meaning samples collected there best represent the average state of the atmosphere.

CO2, which traps heat emitted from the ground and blocks it from escaping into space, naturally fluctuates with the seasons. Levels are highest around May after plants that died during the fall and winter released all their pent up CO2 into the atmosphere. The concentration of the gas starts to drop after May when new plants begin to soak in CO2 as they grow.

However, every year since measurements began, CO2 levels were on the rise despite seasonal fluctuations, scientists say.“We are adding roughly 40 billion metric tons of CO2 pollution to the atmosphere per year,” Pieter Tans, a senior scientist with NOAA’s Global Monitoring Laboratory, said in a statement. “That is a mountain of carbon that we dig up out of the Earth, burn, and release into the atmosphere as CO2 — year after year. If we want to avoid catastrophic climate change, the highest priority must be to reduce CO2 pollution to zero at the earliest possible date.

“The solution is right before our eyes. Solar energy and wind are already cheaper than fossil fuels and they work at the scales that are required. If we take real action soon, we might still be able to avoid catastrophic climate change.”