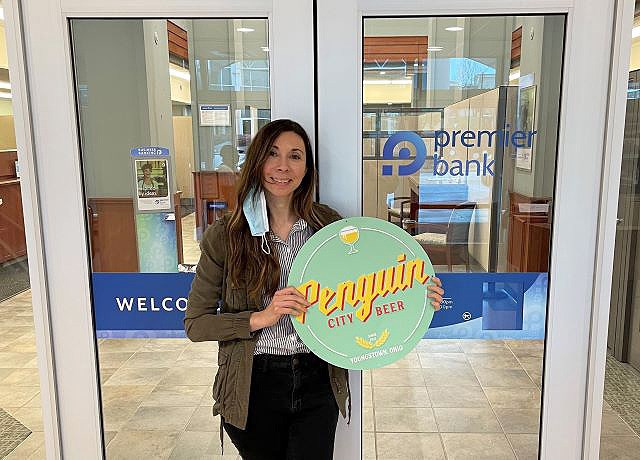 Penguin City Brewing Co. closed on a $2.2 million loan with Premier Bank and Valley Partners. “This is huge for us at Penguin City,” co-owner Aspasia Lyras Bernacki said. (Contributed photo)

The company will now start soliciting bids for renovations at the 32,704-square-foot former Republic warehouse at 460 E. Federal St., which it purchased for $575,000 in December 2020. The property will be used for the production of Penguin City beers and will feature a taproom/restaurant, event center and rental space. The company plans to open the facility in the fall.

“This is huge for us at Penguin City. To be able to invest in our city, be a part of creating a new corridor and make a change in the landscape of our downtown is overwhelming and emotional, and it’s what we wanted to do from Day One,” Aspasia Lyras Bernacki, co-owner of Penguin City, said in a news release. “We hope this sets an example and other businesses start to follow suit and bring their ventures here to our great city.”

Phase one of the project will include the construction of a taproom and brewhouse, which will help Penguin City double its production and expand into other markets, the release states.

A 1,000-square-foot space will be renovated into a small production and taproom for Hannah Ferguson, owner of DOPE Cider House & Winery. Ferguson is the first Black woman to be named a professional brewer in Ohio.

Penguin City has brought on Kristen Olmi of KO Consulting, to seek out grants to fund the additional phases.