He admits that the thought of learning a new position as a senior didn’t inspire him to do cartwheels.
0
Nov 15, 2019 6:56 AM By: Tom Williams 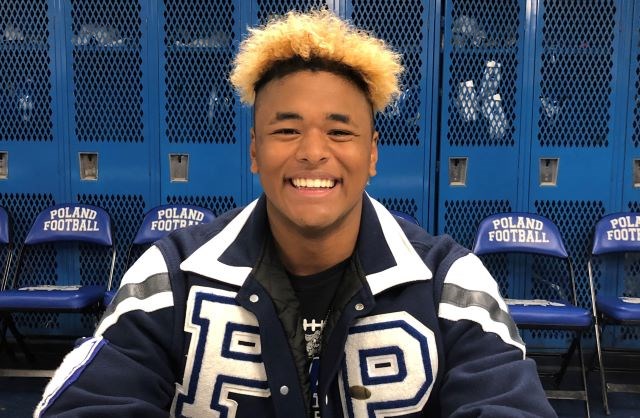 Last season, Tucker also played some at tight end while excelling on defense. He figured he would do it again in his final varsity season.

But after the 2018 season, Ryan Williams, Poland’s fourth-year varsity head coach, knew the Bulldogs’ offensive line needed bolstering for the first season in the Northeast 8 Conference. His staff turned to one of the team’s brightest minds, asking him to become a two-way starter.

“At our exit meeting, we talked about the potential” of Tucker joining the line full time, Williams said.

“Not everyone can handle the physicality,” Williams said. “He’s handled it graciously.”

Two weeks into the postseason, the Bulldogs (9-2) are one of three Mahoning County teams still pursuing the dream of a state championship. Springfield (11-0) and South Range (8-3) are the others.

Tucker, who will play for Carnegie-Mellon University (Division III) in Pittsburgh next fall, admits that the thought of learning a new position as a senior didn’t inspire him to do cartwheels.

“At first, I was a little disappointed, but as [summer] doubles progressed, it became evident that I needed to play there,” Tucker said. “It’s worked out well for us — we’re in the playoffs, we’re making a run and I’m happy I did what was best for the team.”

His two-way status is far from his only memorable accomplishment. Last summer, Tucker earned a 34 on the ACT. It was his fourth time taking the test, registering 26, 31 and 31 in his first attempts.

“My parents [Luther and Este] were already proud of the 31,” said Tucker, adding that he took it again hoping a higher score “would open me up to a wider array of schools.”

That 34 earned him some notice from Ivy League coaches, and while the attention was tempting, Tucker said he’s found an excellent school closer to home to major in finance.

“Carnegie-Mellon is one of the top schools in the nation,” Tucker said. “They have one of the best undergraduate business programs with Tepper School of Business.

“I really didn’t think that being close to home would be so important in choosing, but having the opportunity to stay close to home and to receive a world-class education is just amazing,” Tucker said.

First, Tucker and his teammates are consumed with thoughts of playoff success. It’s been 20 years since Poland’s lone state championship.

“We’ve been in a must-win situation since Week 3,” Williams said of the postseason’s single-elimination format. “After the Howland game, we said the parts are all here, but we’ve got to make a few changes and clean up a couple of things.”

The Bulldogs then swept their NE8 opponents to earn the second seed in Division IV Region 13.

“It was great winning the first league title for the NE8,” Tucker said. “We were very devastated after starting 1-2. Coach Williams did a great job of turning us around.

“I think those losses helped change our attitude," to [where] we had to finish games, to take away any opportunity of [opponents] coming back,” Tucker said.

Williams is pleased to win the league’s first crown.

“It’s a great league — five of the eight [teams] made the playoffs,” Williams said. “I feel very blessed to be part of it. Being the first league champ, that’s special.”

Poland’s closest call in the league was in Week 10 against Struthers, a 14-12 victory. The Wildcats finished seventh in the region, setting up a first-round rematch.

In the second game, the Bulldogs cruised to a 31-0 victory.

“We knew we [made] mistakes, especially on offense,” Tucker said of the first Struthers game. “A lot of missed assignments.”

Saturday, Poland will play Wintersville Indian Creek (10-1) in Salem in a regional semifinal.

Tucker calls practicing in mid-November “awesome. As a sophomore, we went to the playoffs against [Cardinal] Mooney, but we lost. As a junior, we didn’t make it to the playoffs.

“The senior class, we’ve played with each other since we were 6 years old, so it’s great to [still] have that goal of a state championship.”

Tucker, whose fraternal twin brother Nathan is a tight end and defensive lineman, said maintaining his energy has been the biggest challenge.

“That’s the reason I’m able to play both sides against those big players,” Tucker said.

Williams said Tucker didn’t shy away from the challenge.

A linebacker at heart, Tucker said making a big defensive play “puts a smile on my face.

“But on offense when we score a touchdown, that brings a smile to my face as well.”

While he excels at mathematics, Tucker said he’s really enjoying his AP art history course taught by Rick Dinunzio, one of the assistant football coaches.

“It’s great to learn the techniques and all the subjects of the ancient arts and the Renaissance arts.”

Tucker credits Elaine Morlan, his fourth-grade teacher at Dobbins Elementary, for inspiring his love of learning.

“She really pushed,” Tucker said. “She really just helped influence me to learn more about the world and to learn new things.”