The 25th president of the United States was born in Niles. Before becoming president, he served 14 years in Congress and two terms as Ohio governor.
Feb 19, 2021 2:45 PM By: Mahoning Matters staff 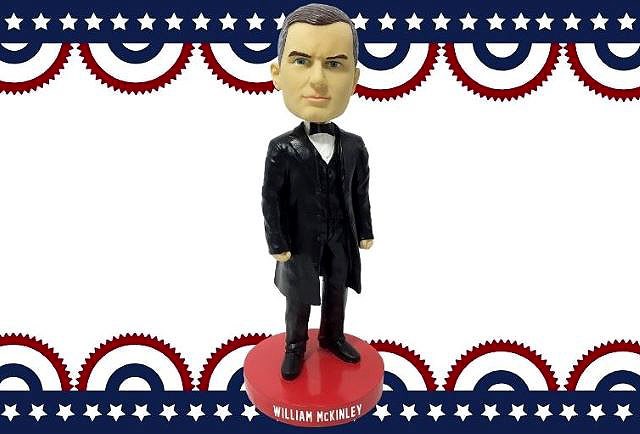 (Image courtesy of the National Bobblehead Hall of Fame and Museum)

MILWAUKEE — The National Bobblehead Hall of Fame and Museum has unveiled a limited-edition bobblehead of President William McKinley.

This marks the first bobblehead featuring McKinley, who was born in Niles, and is one of 18 “Neglected Presidents” bobbleheads that the Hall of Fame and Museum released today.

Standing in a presidential pose, the McKinley bobblehead is wearing a black suit and bow tie. The bobblehead includes McKinley’s name on the base. Each bobblehead is individually numbered to 500, and they are available only through the National Bobblehead Hall of Fame and Museum’s online store. The bobbleheads are $30 each, plus a flat-rate shipping charge of $8 per order.

"We’re excited to release the first bobblehead of President William McKinley,” Phil Sklar, National Bobblehead Hall of Fame and Museum co-founder and CEO, said in a news release. “While previously neglected in the bobblehead world, William McKinley is an important part of our country’s history, and we think this bobblehead will be a great learning tool and a fun collectible for history buffs.”

A Republican, McKinley served as the 25th president of the United States from 1897 until his assassination in 1901. During his presidency, he led the nation to victory in the Spanish-American War and raised protective tariffs to promote American industry. On Sept. 6, 1901, in Buffalo, he was shot by Leon Czolgosz, a second-generation Polish-American with anarchist leanings. McKinley died eight days later at age 58 and was succeeded by Vice President Theodore Roosevelt.

McKinley was the last president to have served in the Civil War. He practiced law in Canton before winning a seat in Congress at age 34. During his 14 years in the House, he became the leading Republican tariff expert, giving his name to the measure enacted in 1890. The next year, he was elected governor of Ohio, serving two terms.