Some wondered Thursday if the hyper-partisan atmosphere of politics during the pandemic — at times including targeted harassment — had taken a toll on Youngstown native Dr. Amy Acton.
Jun 12, 2020 4:11 AM By: Ellen Wagner 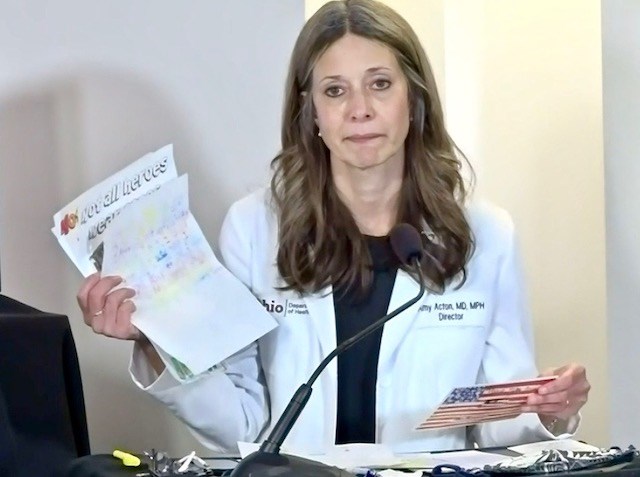 COLUMBUS — Dr. Amy Acton’s resignation Thursday as Ohio's Department of Health director was met by surprise — and some trepidation.

“It’s tragic, it’s really sad for all Ohioans,” said Ohio House Rep. Michele Lepore-Hagan, D-58th. “She had a vulnerability about her that was ... so sincere.”

During the live state update on Thursday, Gov. Mike DeWine announced Acton was stepping down from ODH, but would remain in a new role as his chief health advisor.

Acton said she has been reflecting on her position for some time as she led the normal work of ODH, worked through the pandemic and counseled the governor.

“I’m a person who really has a very strong sense of wanting to do my very best and didn’t want to let any of these things be shortchanged,” Acton said. “I really want to empower the team back at ODH to keep doing that work, and I am going to keep advising and working with them."

Yet, some wondered if the hyperpartisan atmosphere of politics during the pandemic — at times including targeted harassment — had taken a toll on the Youngstown native.

“She wasn’t a political person," said Erin Bishop, Youngstown health commissioner. "She was truly a physician and a public health person."

Acton was the third health director since Bishop started working for the health department in 2011. Bishop called her “a breath of fresh air” who had a passion for public health.

Bishop said it was unfair for people to be upset with Acton, file lawsuits and protest outside her home, noting "She didn’t have that political drive. She was really just there to protect the people.”

During the pandemic, DeWine and Acton faced pressure to reopen Ohio. Lawsuits were filed to try to force the lifting of restrictions on reopened businesses, including bars and restaurants, gyms, amusement parks and organizers of music festivals.

People toting assault weapons also gathered outside of Acton’s home in Bexley on numerous occasions to protest the restrictions that she issued related to the pandemic.

Videos of that led to DeWine to defend Action telling his critics: "Come after me."

When the COVID-19 pandemic hit, Bishop said Acton was the perfect person for ODH director: Since Acton was both a physician and in public health, she understood both sides, but she wasn’t involved in politics.

“People may disagree with someone, but they’re just doing their job to protect them,” Bishop said.

Lepore-Hagan believes that there were political forces at work that led to her resignation.

Ohio Democratic Party Chairman David Pepper said in a statement that “Acton rose above the petty partisan politics that so often dominates Columbus, and she did it with uncommon grace, humility and professionalism.”

Pepper added: “She became the epitome of a public servant and leader and a role model to so many. Her decision to step down is Ohio’s loss. She has saved countless lives.”

Ryan Tekac, Mahoning County health commissioner, said Mahoning County Public Health viewed Acton as a leader in public health and her work during the pandemic saved many lives in Ohio.

“We are thankful for her leadership and composed demeanor as the director of the Ohio Department of Health and we look forward to her continued success as Governor DeWine’s chief health advisor,” Tekac said.

U.S. Rep. Tim Ryan of Howland, D-13th, released a statement directed at Dr. Acton: “...we were blessed to have your unprecedented leadership at the Ohio Department of Health. As we continue to fight this pandemic, we will miss your medical knowledge, empathy and wise advice."

During Thursday’s update, Acton said she wants to turn her attention to promoting the health of Ohio. She shared her appreciation for those who helped her during her time as the director, including ODH staff, local health departments, Ohio State Highway Patrol and the governor’s staff.

She was hired by DeWine in February 2019 as the director of ODH. Prior to her role, she had more than 30 years of experience in medical practice, public and private administration, health care policy and analysis.

Acton said she will be taking a few days off to spend with her family and to gear up for the next phase of work.

“I am here,” Acton said. “I am more determined than ever to advance the health and well-being of Ohio.”

Bill could leave some Ohio casinos and racinos without sports books
Jun 19, 2021 2:00 PM