Lordstown Motors CEO Steve Burns said if his company can raise enough money to put the Endurance on the plant's line, it could mean new jobs for local UAW members who haven't yet accepted transfers — about 500 people.
Nov 7, 2019 9:21 PM By: Mahoning Matters staff 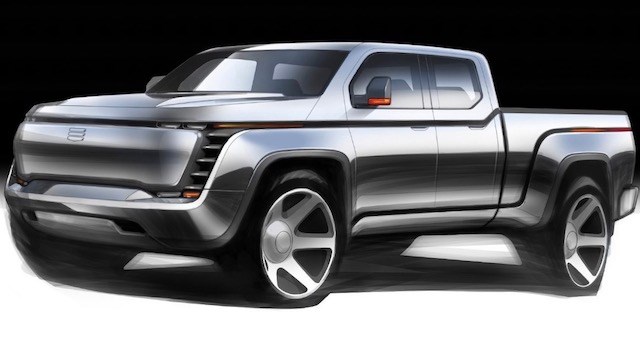 Lordstown Motors Corp. announced Thursday it has acquired the 6.2-million square-foot complex from GM, where it intends to manufacture electric fleet vehicles, including an electric pickup truck named Endurance.

"One of the largest and most productive auto manufacturing plants of all time, the Lordstown Complex will serve as our headquarters, with our mission being to create the leading electric vehicle epicenter in the region," according to a statement on the website. "This plant — combined with the legendary capability of the people who work there — is where we will build the work vehicles of the future."

That vehicle could be on the market by the end of next year, Lordstown Motors CEO Steve Burns said during an electric vehicle forum hosted by the City Club of the Mahoning Valley in September at Packard Music Hall.

"We are committed to the people of Lordstown, we will locate our headquarters in the Lordstown plant, and we plan to build the Endurance pickup truck utilizing experienced workers who helped produce millions of vehicles in this very same plant," Burns said in a statement Thursday.

The 53-year-old facility just off Interstate 80 has sat mostly empty since workers trickled out of the plant after the last Chevy Cruze was built on March 6. The sale has been the subject of speculation for months, which culminated in October with the United Auto Workers/GM agreement that formally ended GM production at the plant.

State Sen. Sean O'Brien of Bazetta, D-32nd, called the news "bittersweet." GM has left the Mahoning Valley after more than five decades, but the sale of the facility paves the way for "the future" of the automotive industry, he said.

Burns told Bloomberg if his company can raise enough money to put the Endurance on the Lordstown line, it could mean new jobs for local United Auto Workers members who haven't yet accepted transfers to other GM facilities.

"Nothing's going to replace the 5,000 jobs we lost and the thousands of spinoff jobs in the Valley that were associated with the plant under GM," said Tim O'Hara, UAW Local 1112 president, adding that the local union hasn't been contacted by Lordstown Motors Corp.

"Obviously, any type of jobs for the Valley are something that a union wants. We want good-paying jobs with benefits," O'Hara continued. "Our people are are experienced in building ... vehicles so at that point, whatever potential jobs there are we would like them to be represented by Local 1112."

Burns said in September he intended to wait until UAW/GM negotiations had finished before reaching out to the union. He said he believes the compensation would be "competitive," but added the business must crawl before it can run.

“That’s our goal — we want to get back to the same three shifts,” Burns said. “That plant only makes sense — it’s so big — only if you go full throttle.”

Lordstown Motors Corp. is licensing designs of electric vehicle components developed by Workhorse Group of Cincinnati -- of which Burns was formerly CEO -- to get a head-start to market, according to a Thursday statement. The Lordstown plant will also get the 6,000 preorders for Workhorse's W-15 prototype under that agreement.

Through this deal, Workhorse will receive 10 percent equity in Lordstown Motors Corp., as well as a 1-percent license fee on gross sales of each Lordstown vehicle sold.

"Workhorse is the right technology partner for LMC, and this agreement ensures that both parties are positioned, and incentivized, to succeed," Burns said in a statement. "We, along with Workhorse, remain dedicated to keeping vehicle production in Lordstown.

"Now, with LMC's acquiring of the Lordstown, Ohio factory, it is time to begin executing on our plan."

Workhorse remains a contender for a U.S. Postal Service contract to develop electric fleet vehicles -- and Rulli said he's keeping his "fingers crossed." The winner won't be announced until next year, according to a statement from USPS.

Lordstown Motors Corp. did not issue a statement to Mahoning Matters on Thursday. Burns himself did not respond to a request for an interview.

Another 1,000 jobs could be created by battery cell production in the Lordstown area, which GM identified as another opportunity in a statement last month.

GM spokesman Jim Cain said Thursday the company "is committed to future investment and job growth in Ohio and we believe LMC's plan to launch the Endurance electric pickup has the potential to create a significant number of jobs and help the Lordstown area grow into a manufacturing hub for electrification."

The Lordstown Motors Corp. website states the company would create "electric vehicles that radically improve the way work gets done.

"Cost effective for fleets, safer, and designed to be more productive than traditional commercial vehicles, Lordstown pickup trucks and fleet vehicles are built to fix challenges that limit modern work."

Local leaders said they're ready to back the new venture.

“I am very encouraged that the Lordstown plant has been acquired by Lordstown Motors Corp.," U.S. Rep. Tim Ryan said in a statement. "I am extremely proud of the men and women who helped build the General Motors brand of vehicles at the Lordstown Complex.

"Electric vehicles are the future of transportation, and my goal is to make sure these vehicles are built right here in Northeast Ohio," Ryan added.

YSU President Jim Tressel said Lordstown Motors Corp. and other area startups are "positioning Northeast Ohio as a hub for technology, which completely reshapes the future trajectory of the whole Mahoning Valley. ... We must take charge of our future."

O'Brien said he's hopeful new investments in energy storage and battery cell production in the area could "be part of the revitalization of the Valley."

"It's not old steel mills, old manufacturing. It is the future of energy."