“Thanks to dozens of large and small donors, this statue will be a monument to unity across racial lines and to a Youngstown man’s important contribution to that goal,” said Ernie Brown, co-chair of the statue committee.
Jan 27, 2021 11:30 AM By: Mahoning Matters staff 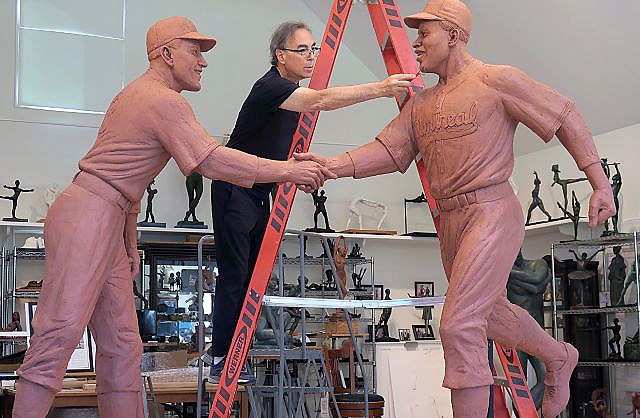 Sculptor Marc Mellon applies finishing touches to the final model of the Robinson-Shuba Commemorative Statue, which will rise nearly 7 feet above its base in downtown Youngstown. (Contributed photo)

YOUNGSTOWN — The 10 donors who provided most of the support for the Robinson-Shuba Commemorative Statue will be recognized on a plaque at the site, the committee developing the statue announced Tuesday.

Led by the Marie Lamfrom Charitable Foundation, the Youngstown Foundation and the McDonald’s Restaurants of the Mahoning Valley and Western Pennsylvania, the 10 recognized donors collectively provided $380,000 of the $414,000 the committee raised, as well as critical in-kind services.

“We appreciate the enormous generosity of these donors, and we think it’s safe to say the entire Mahoning Valley does, too,” Greg Gulas, co-chair of the statue committee, said in a news release. “These gifts will help ensure that future generations in our community — and beyond — understand the Robinson-Shuba handshake and the values it represents.”

Meanwhile, the statue committee has postponed the dedication of the statue, originally set for April, because of COVID-19. The committee expects to decide by mid-May on a new date in late summer.

The largest donation for the statue — $175,000 — came from the Oregon-based Marie Lamfrom Charitable Foundation. The foundation normally supports children’s causes in the Portland area but decided to support the Youngstown statue after its leaders watched a “CBS Sunday Morning” story about it.

It will be designated a platinum donor, and the Youngstown Foundation and McDonald’s Restaurants will be gold donors.

The statue will portray the 1946 handshake at home plate between Jackie Robinson, the first Black player allowed to compete in mainstream professional baseball, and George Shuba, his white teammate from Youngstown.

“George Shuba did the right thing, reflecting the values he learned as he grew up in Youngstown,” said Ernie Brown, co-chair of the statue committee. “Thanks to dozens of large and small donors, this statue will be a monument to unity across racial lines, and to a Youngstown man’s important contribution to that goal.

“We look forward to dedicating the statue in Wean Park when the COVID-19 situation improves. So we’re postponing our April 18 event in the best interest of the health and safety of the many we expect will attend. We look forward to setting a new date by mid-May.”

More information about the handshake and statue can be found here.