Seasonal hiring in full swing across the Mahoning Valley 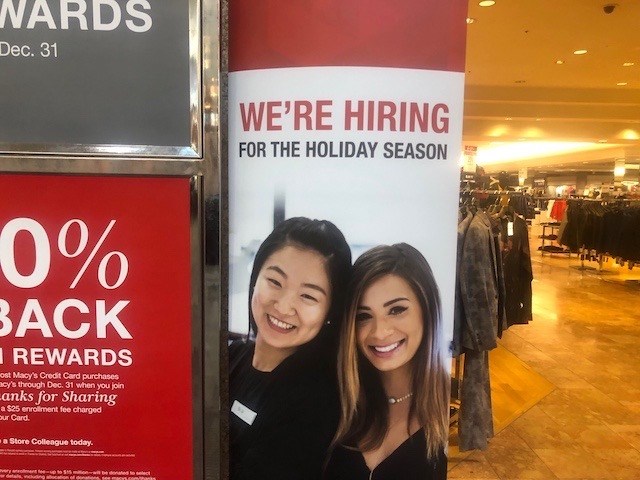 At retailers like Macy's in the Southern Park Mall, it's beginning to look a lot like holiday hiring is underway in the Mahoning Valley. Christmas is 71 days away, FYI.

While it's not even Halloween and Christmas is 71 days away, here are some things to consider before you begin that job hunt.

The hourly pay and employee discount that often accompanies seasonal employment come at a cost  — namely the least desirable work shifts. The busiest days for retail establishments during the holiday season are Friday through Sunday. Seasonal employees are often required to work Thanksgiving and Black Friday — the day after Thanksgiving.

"They are looking for workers who are flexible in terms of hours, which is especially important in the holiday season when stores go into extended hours," said Bell. "It's hard to find those people willing to be flexible to fill those voids."

Most establishments also conduct background checks on potential temporary employees. In retail, for example, a theft arrest can disqualify you from getting hired.

Wages for seasonal jobs in the Youngstown area hover between about $8.55 and $15 an hour, but most retail establishments adjust wages based on experience. Some larger retailers like Target in Boardman have signs on doors promoting a $13 an hour wage.

Although Target's advertised wage is higher than competitors, the store was the subject of a report alleging that increased starting wages are accompanied by reduced hours.

But, as in all things, experience matters.

"Seasonal wages are right around $9" for employees of Burlington Coat Factory, said Adam McAnulty, store manager of the Boardman location. "With experience, I pay more, which is why I don't advertise $9."

Retailers agree that so far there has been increased interest in seasonal jobs.

"There's something about this area," said McAnulty. He took over management of the store a week ago.

"This year is a lot bigger [for hiring] than previous years. I think it's due to other stores closing in the mall," said Jackson.

In addition to wages, there are employee discounts at most retailers that make wages go further, in terms of gift-giving. Plus, seasonal work can be a great way for en employee to get a foot in the door at local retail establishments. Ollie's Bargain Outlet, Hollister and JCPenney are among the stores that also offer opportunities to transition seasonal workers into permanent employees.

People looking to take advantage of these opportunities this holiday season should act fast. Many companies are having job fairs and employee hiring events this week and next week.

Though the events are billed as casual, hiring professionals recommend that interested applicants dress professionally and bring a resume. And it won't hurt if applicants Google the companies they are interested in working for so that they can demonstrate some interest to prospective employers.

At Eastwood Mall, Junior Achievement is sponsoring a college, career and trades conference on Oct. 29 in the old Sears building, Bell said. The session from 7 a.m. to 3 p.m. will be aimed at recruiting local high school students, but the conference will be open to the public from 5 p.m. to 7 p.m.

"Amongst all those different businesses with hiring tables will be our mall merchants to take advantage of the opportunity to flesh out the mall's seasonal staff," said Bell.

If you are interested in who is paying what, here's a sampling of local retailers that publicize their wages: