The LYRIQ will be the first electric vehicle produced at General Motors' plant in Spring Hill, Tenn., which is getting $2 billion in upgrades and expansions, the company announced Tuesday.
Oct 21, 2020 4:11 AM By: Mahoning Matters staff 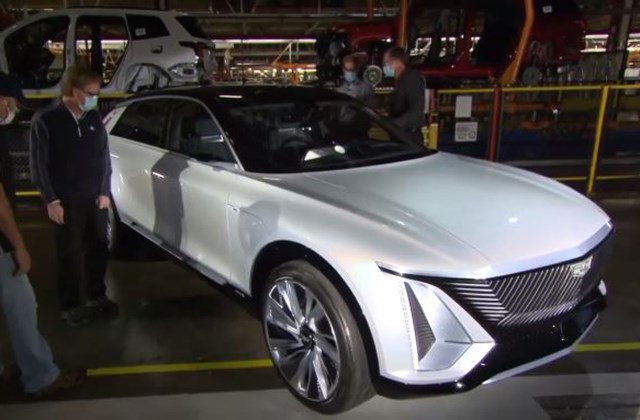 General Motors representatives eye the new all-electric Cadillac LYRIQ, which the automaker announced Tuesday. The vehicle will be powered by battery cells to be made in Lordstown and will likely be built by some former GM Lordstown workers. (Photo provided)

SPRING HILL, Tenn. — Many former Lordstown autoworkers will likely have a hand in making the new all-electric Cadillac, which General Motors announced during a Tuesday event.

Battery cells to be produced locally will also power it.

The new Cadillac LYRIQ will be the first electric vehicle produced at GM's plant in Spring Hill, Tenn., which is getting $2 billion in upgrades and expansions, according to a Tuesday release from the company.

About 400 former GM Lordstown workers transferred to the Tennessee plant even before the automaker announced the plant's closure in March 2019, according to Tim O'Hara, the former president of the local shop.

The LYRIQ will be powered by Ultium Cells technology, which the company intends to produce at its new $2.3-billion facility currently under construction near its former Lordstown Assembly Complex. That former GM assembly facility is now the home of the Lordstown Motors Corp.

The new battery plant under construction, a joint venture between the automaker and LG Chem, "will play a critical role in GM's commitment to an all-electric future," reads the release.

This makes the 30-year-old Tennessee plant GM's third electric vehicle-producing facility, in addition to two other facilities in Michigan. The company is investing $2 billion to expand the plant's paint and body shops and upgrade its assembly line, which will begin immediately.

Tenn. Gov. Bill Lee during the Tuesday event called it the single-biggest investment in the state's history.

The automaker has put up $4.5 billion for those three electric vehicle production sites in the last 19 months, according to the release. The company has invested $29 billion in U.S. manufacturing sites since 2009.

“We are committed to investing in the U.S., our employees and our communities,” said CEO Mary Barra. “These investments underscore the success of our vehicles today, and our vision of an all-electric future.”

The Tennessee plant will also continue making its traditionally powered vehicles, the Cadillac XT6 and XT5.

In addition to the $2 billion in upgrades at the Spring Hill plant, the automaker is also investing: