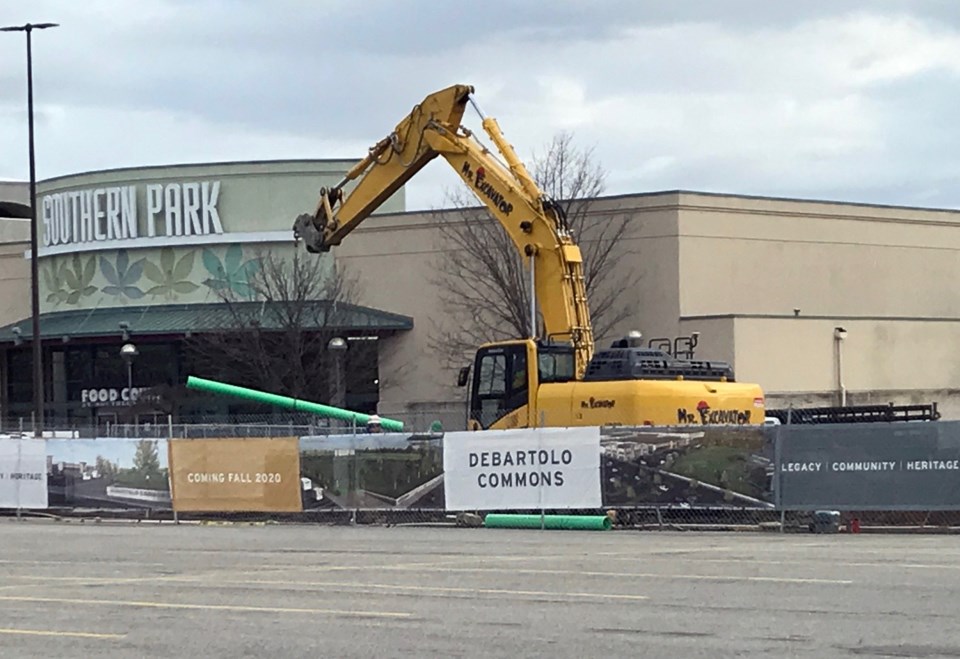 Construction on DeBartolo Commons in December 2019 as work crews install piping near the main entrance off of Market Street.

BOARDMAN — Since the coronavirus pandemic took hold in Northeast Ohio, there hasn't been much news regarding the $30 million renovation of the Southern Park Mall.

Permit applications filed at the Mahoning County Building Inspection Office, reveal, however, the project appears to be moving forward.

While most reflect upgrades to things like the HVAC system, the permits also reveal two presumptive new tenants: Planet Fitness and a U.S.Navy recruitment center.

The project is currently outside the purview of Boardman Township, administrator Jason Loree said.

"They had their original site reviewed and approved," said Loree. "So really it just comes down to their construction permits and things they would normally get from Mahoning County Building."

Mahoning Matters reached out to mall owner Washington Prime Group regarding these permits, but the company did not comment.

"We haven't been contacted by the mall regarding their project on any indication whether they'd be held up or are full steam ahead," said Loree.

Prior to the pandemic, Washington Prime Group was lobbying to local redevelopment tools that would allow the company to recoup $6 million of the $30 million redevelopment project.

On Dec. 30, Boardman trustees voted to designate the project a Community Entertainment District.

The CED would provide the mall with five liquor licenses without requiring incoming restaurants to acquire them through traditional means. Unlike other means of acquiring a liquor license, liquor licenses acquired through the CED cannot be transferred, sold or used outside the CED designation.

The Community Reinvestment Area agreement will exempt mall owner Washington Prime Group from having to pay property taxes on the assessed value of new structures at the site for 15 years.

WPG is also requesting the creation of a Joint Economic Development District, which would allow Boardman and another community to levy an income tax on new employees of the mall.