Stuck on YSU's campus with little access to food

Many international students at YSU are stranded on campus due to COVID-19. With restaurants and other university services closed, the YSU community is stepping up to help.
May 26, 2020 10:14 AM By: Justin Dennis 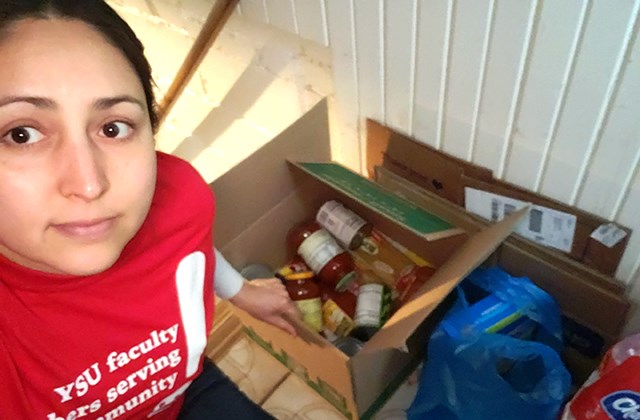 Alicia Prieto Langarica, an associate professor at Youngstown State University, shows some of the items collected for the university's food pantry for students who are remaining on campus during the COVID-19 pandemic. (Photo provided)

[EDITOR'S NOTE: This story has been updated to correct the station along Fifth Avenue is a Sunoco station.]

YOUNGSTOWN — Foreign students at Youngstown State University are weathering the COVID-19 pandemic like all Ohioans, but without many of the support systems available to domestic students.

Usually YSU students would take off the summer semester and return home, but many international students are unable or unwilling to do so during the COVID-19 pandemic, due to travel restrictions or health risks. Domestic students who don’t have a safe place to return to are also staying on campus.

Any other summer, on-campus eateries would be open for these students but today they remain closed with the rest of the university, which has transitioned to online courses.

YSU’s shuttle service has also stopped running, creating another challenge for international students. Many don’t have their own cars or hold domestic driver’s licenses. They might not even know how to drive if it’s more common to rely on public transportation in their home countries, Prieto Langarica said.

This makes it harder for international students who don’t have relatives or some other domestic support system to regularly get food, she said.

To help the stranded and less-mobile students, Prieto Langarica has overseen an effort to stock up the university’s food pantry, which is now seeing an extraordinary surge of donations from the community.

YSU faculty and staff have made weekly contributions, she said. A local nonprofit has donated feminine hygiene products and other toiletries. Westside Bowl along Mahoning Avenue in Youngstown — which has been accepting donations to dish up free pizzas for the community — even offered a pizza party for international students, though a gathering was deemed too risky, she said.

Every time Prieto Langarica takes stock at the pantry, she notes more and more new cases of goods, she said.

Donations are accepted from 10 a.m. to 2 p.m. Monday through Friday at the north entrance of the university’s Kilcawley Center. The pantry’s website includes an Amazon wish list of needed items. Prieto Langarica said she’s organizing a large donation drive early next month, hoping for enough donations to last through June.

The pantry is usually stocked with non-perishables, but Shilpa Bhandari, a Nepalese mathematics and computer science major — who said she’s not used to canned or frozen foods — has received fresh chicken, potatoes, rice, tomatoes, onion and garlic from the new donations, which she can use to cook a traditional curry over rice.

Some students are able to take bicycles on grocery runs, but others must rely on friends with cars or delivery apps like DoorDash and Instacart to get what they need. With January’s closure of the Park Avenue CVS frequented by YSU students, there are even fewer places within walking distance, Bhandari said.

“The closure of the shuttle made it a little difficult. But since then we have had a few friends who dropped [off] groceries and since we also received groceries from the pantry, it has not been that difficult,” she said.

My Le, a Vietnamese business and administration major, was able to briefly return home two months ago, before COVID-19 became more widespread. She said she now frequents the Sunoco station along Fifth Avenue, or orders takeout with the GrubHub app.

“We mainly rely on our international and American friends who own a car to get a ride with them to the grocery store,” she said. “They have been really willing to help. Some people even actively reached out to ask if I need help.”

International students are ineligible for any government-subsidized loan programs, including the CARES Act’s financial aid grants, according to the U.S. Department of Education. YSU used its CARES Act funding to create the Penguins CARE Emergency Grant, which prioritizes release of funds to Pell grant recipients — but Pell grants also aren’t offered to international students.

However, the university in March began a three-month, $50,000 fundraising campaign to create the Penguin-to-Penguin COVID-19 emergency aid fund, which offers $500 to students facing financial hardships. As of Monday, donations topped $53,000.

Blundell said it wasn’t apparent initially to YSU staff that international students were struggling with basic needs — not until one anonymous student reached out to a colleague of Prieto Langarica about being unable to source food.

“That’s why we are so concerned for our international students — they are completely in a situation that they never asked to be in,” Blundell said.

History major Emily Dawes took summer semester off and was supposed to return home to Guernsey, one of Britain’s self-governing islands in the English Channel, but non-emergency travel to and from the island is expected to remain closed until August, she said. Regardless of that, Dawes said some of her relatives have underlying health conditions, making her return risky for them.

“I want to go home with all my heart, as I don’t know when I’ll see my family again and I don’t have anything to do here in the States — but I care about my sister and grandmother’s health more than what I want,” she told Mahoning Matters.

Instead, Dawes has been living in Poland with her American boyfriend. Though they’re both working on getting their driver’s licenses and a car — so they can at least get to parks and other outdoor areas — they happen to be within walking distance of a Dollar General. Otherwise, they’re relying on Instacart and DoorDash for food, she said.

After YSU announced its spring semester would be online-only, Natalie Nguyen decided to return home to Vietnam and continue her studies there, though the 11-hour time difference made it a bit tougher to attend class and coordinate projects.

Vietnam has become one of the world’s pandemic success stories, the BBC reported earlier this month, with only about 300 cases of COVID-19 among 97 million people, and no reported deaths.

Vietnamese nationals returning to the country are quarantined for 14 days in military camps that are completely isolated, while receiving free meals and bi-weekly virus testing, Nguyen said.

“I can’t express my gratitude enough for my government making sure everyone is safe and putting our well-being above everything else,” Nguyen told Mahoning Matters. “And now, we’re like back to normal and everything is open. … I go to coffee shops and the mall every day.”

Mahoning Matters first became aware of this issue thanks to a tip from one of our readers. If you have a tip or story idea, please send it our way.