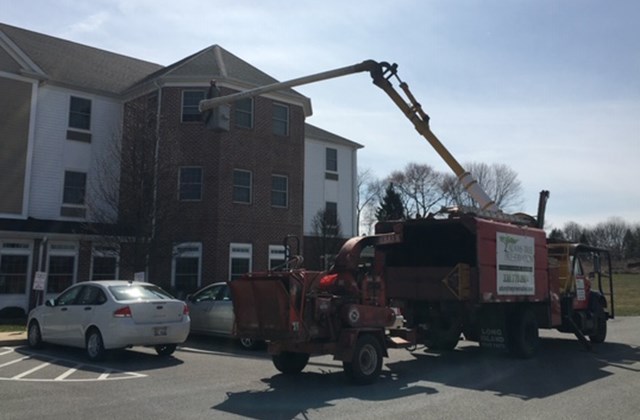 Charley Adams of Bessemer, Pa., on Sunday used his business' bucket truck to visit his 80-year-old mother at Windsor Estates Assisted Living in New Middletown, while access to the facility was restricted to protect against the spread of the new coronavirus, or COVID-19. (Submitted photo)

NEW MIDDLETOWN — Charley Adams said his 80-year-old mother has been going “stir-crazy” staying at Windsor Estates Assisted Living, after the facility restricted access due to the outbreak of the new coronavirus, or COVID-19.

On a regular Sunday, the 45-year-old Adams of Bessemer, Pa., might have taken his mother Julie out to lunch, or to dinner on every Thursday evening.

But with the now-pervasive threat of the virus — which poses a severe risk to the elderly — all that had to stop. Charley’s mother, however, was “not willing to accept ‘no’ for an answer,” he told Mahoning Matters.

The nursing home allows residents to visit with relatives while behind the facility’s windows and also offers video calls — but his mother isn’t very computer-savvy, he said.

So this past Sunday, Charley, who owns Adams Tree Preservation, planned a special surprise.

“I called and said, ‘I’m right outside your window,’” he said.

And there he was, atop the boom on his company’s bucket truck, which he raised up to her third-story window.

“She used to take me to look at trucks and equipment when I was a little boy,” Charley said. “She always asked me how my truck’s doing.

“I thought it would be funny — something to cheer her up a little bit.”

Ohio Department of Health Director Dr. Amy Acton, during the state’s Wednesday briefing on its coronavirus response, said a little more than 10 percent of the state’s total 704 confirmed cases of coronavirus were residents in long-term care facilities, which have been some of the “hardest hit.”

Though Charley said he feels health professionals at Windsor Estates have been accommodating, yet extremely diligent about keeping COVID-19 out of their facility, he could tell “there’s a feel of uncertainty and anxiety about everything going on.

“I think she was feeling kind of nervous about stuff,” Charley said. “She got a big kick out of [the bucket truck]. … They’ve been locked down for two weeks.”

When asked what Adams would share with others trying to cope with the world’s “new normal,” offered up one word — "perseverance."

That was the name his father, a sailor, gave to his boat, he said.

“Be nice to each other. And try to cheer each other up,” Charley said.