Still, despite heart-wrenching stories from the front lines and dire warnings that hospitals are nearing capacity, neither the governor nor the health care workers who joined him Thursday advocated for measures credited with flattening the curve in the spring.
Nov 20, 2020 4:11 AM By: Jess Hardin 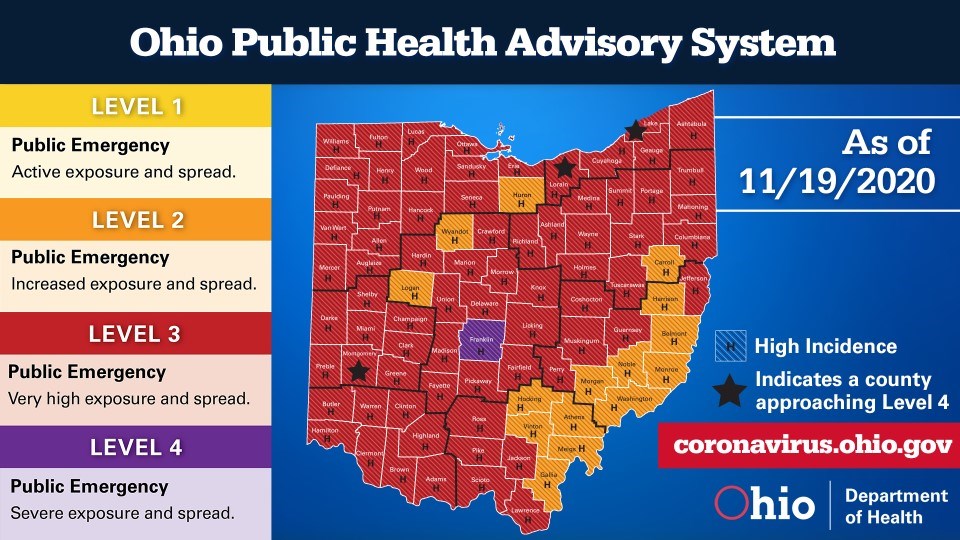 COLUMBUS — When discussing her recollection of the onset of the coronavirus pandemic in March, Cheryl Herbert, senior vice president at Ohio Health, said Thursday, ”Public health measures we had in place back then — they worked.”

Yet, when asked if she supports reinstituting those measures — namely a statewide shutdown — to curb the state’s current surge, Herbert instead pivoted to Gov. Mike DeWine’s well-worn lead by stressing the importance of “personal responsibility.”

Despite heart-wrenching stories from the front lines and dire warnings that hospitals across the state are nearing capacity, neither DeWine nor the health care workers he tapped to join him Thursday are willing to advocate for measures credited with flattening the coronavirus curve in the spring.

That has left local leaders to take matters into their own hands.

As of Thursday night, Cuyahoga, Franklin, Lucas, Medina and Montgomery counties, which encompass Cleveland, Columbus, Toledo and Dayton, have issued stay-at-home advisories, meaning about 32 percent of Ohioans are living in a county that has formally urged them to stay home.

These "advisories" are really not more than strong suggestions. But they are the best local governments can do.

For his part, DeWine on Thursday avoided pinpointing the threshold for issuing a statewide stay-at-home order and instead praised local leaders for stepping up.

Everyone seemed to agree, however, that the worst is yet to come.

"If I were to use an analogy, I would say what we liken this to is a tsunami," said Herbert. "The forecasters told us it's coming. We're feeling the early wave. If you knew that a storm surge of epic proportions was headed in your direction, you would evacuate. You would leave the area. You would run away. Health care workers cannot evacuate."

Bruce White, CEO for Knox Community Hospital in Mount Vernon, noted that two months ago, 5 percent of the hospital's patients had COVID-19.

"Now we're at 30 percent," he said. Nearly 50 percent of the intensive care unit beds at the hospital are being used by COVID-19 patients.

On Thursday, DeWine unveiled an updated Ohio Public Health Advisory map that appeared to show Ohio bleeding: All but 15 counties have the Level 3 "red" designation.

For the first time, the “purple” designation was used — for Franklin County, home to Columbus. The spread is so rampant that no counties are in Level 1 or "yellow."

The three counties that make up the Mahoning Valley are now "red" in the state's coronavirus alert system. Both Mahoning and Trumbull counties have been at Level 3 for several weeks; Columbiana County joined them this week.

Discussing the incomplete data for Wednesday, DeWine explained a backlog of 12,000 unverified cases has not yet been added to the total tally this week, meaning the daily case totals are likely quite a bit higher.

During Thursday's press briefing, health care professionals painted a dire picture of Ohio's hospitals as they contend with coronavirus in the community and among personnel. When the pandemic first began, front-line workers faced a shortage of personal protective equipment; they're now struggling to appropriately staff hospitals as health care workers are exposed to the virus.

"We can manufacture equipment and we can manufacture supplies and we can create spaces to place beds and to put people in, but what we can't manufacture are staff members that are skilled enough to care for those patients that we're seeing influx into our facilities," said Erin Russo, director of Clinical Education for Memorial Health.

In any other circumstances, hospitals could rely on neighbors to help ease the burden, but as the virus takes hold in every county, additional health care workers are hard to come by.

"Our most unsettling fear is the fact that we could have the threat of patient care being compromised in some way," Russo said. "That happens when staffing gets slim and stretched."

• All three Mahoning Valley counties are now "red" in the state's coronavirus alert system. Both Mahoning and Trumbull counties have been at Level 3 for several weeks; Columbiana County joined them this week.

• When it comes to allowing taxpayers to easily analyze state finances, Ohio appears to have some work to do, according to a new report by Truth in Accounting. Ohio ranked 29th, well below average against the other 50 states, when measuring things like the use of an independent auditor, timely publishing and useful online links.

• According to the Pennsylvania Department of Health on Thursday, there are 288,978 COVID-19 cases in the state, which have led to 9,581 deaths. The state said the recovery rate is 66 percent. There have been 2,142 confirmed or suspected cases in Mercer County and 32 deaths; 1,725 cases in Lawrence County and 59 deaths.

• Pennsylvania joined an exclusive club this week when the state’s Gaming Control Board announced sportsbooks took $525.8 million in bets last month. Not only is that a record amount, surpassing the $462.8 million wagered in September, but Pennsylvania joined Nevada and New Jersey as the only states to break the half-billion dollar barrier for a month.

• The Mahoning Valley Historical Society announced the Tyler History Center will close to the public starting today due to increased concern over the local spread of COVID-19. The center will remain closed "until further notice," according to a Thursday afternoon release. The Arms Family Museum along Wick Avenue closed for the holiday season on Monday.

• The Salvation Army on Glenwood Avenue will host a drive-thru food distribution and community resource fair from 11 a.m. to 12:30 p.m. today. Local organizations will join to help provide assistance to people who may benefit from connecting with local resources.

• Families can safely meet and greet Santa Claus at Southern Park Mall in the JCPenney Concourse from Nov. 27 to Dec. 24. Santa will visit with families at the mall from 11 a.m. to 8 p.m. Mondays through Saturdays and from 11 a.m. to 7 p.m. Sundays.

• The classic ballet "The Nutcracker," normally the Ballet Western Reserve's holiday offering, will be presented in a new way as "A Nutcracker Drive-In" at the Eastwood Field parking area on the big screen Dec. 18-19 at 7:30 p.m and on Dec. 20 at 6 p.m. Tickets cost $45 per car and are available on the ballet's website.