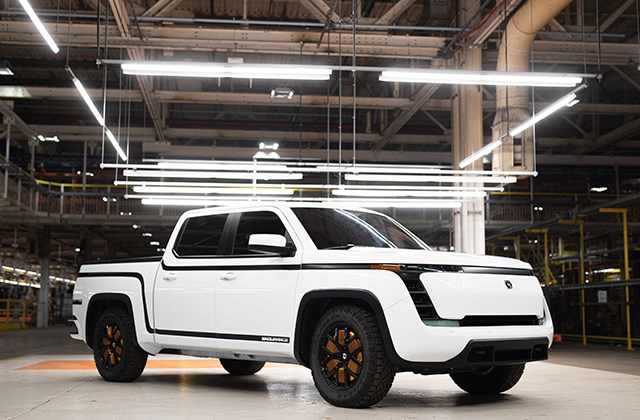 LORDSTOWN — Lordstown Motors Corp.'s initial public offering, which started trading Monday on the NASDAQ under the ticker symbol "RIDE", had by 2 p.m. had risen from it's $18.80 open to $19.99 by 2 p.m.

Lordstown Motors, which is developing what’s believed to be the first all-electric pickup truck, the Endurance, last week finalized its merger with DiamondPeak Holdings Corp., a special purpose acquisition company, which took the startup public.

The company's warrants — issued by an employer that gives the holder the right to buy company shares at a certain price before the expiration, according to investopedia.com — traded under the ticker symbol "RIDEW" spiked early Monday from $6.75 to $8.80, but leveled out to just above $7 by 2 p.m.

Lordstown Motors reported about $675 million in investments, which CEO Steve Burns said should be enough to bring the Endurance to market. The company has already secured more than 40,000 preorders, representing $2 billion in potential revenue.

"Rarely do you have a startup that has enough money in the bank, that has enough revenue to get to production," Burns told Mahoning Matters in a Monday morning interview. "It's kind of a unique position, but essentially our goal is squarely focused on bringing the truck to market."

The Endurance is expected to enter production in September 2021, Burns said Monday. The company unveiled a prototype in June at its Hallock Young Road facility, the former General Motors Lordstown Assembly Complex.

"It's not lost on us that, of course, we're bringing back a shuttered factory, and that is exciting — but we're bringing a new type of vehicle here," Burns added. "They don't think [the Mahoning Valley is] necessarily where innovation comes from.

"I think having that come out of Lordstown, Ohio, is pretty cool."