“We are committed to further advancing student success and academic excellence for the benefit of our students and the entire community,” the YSU president said.
0
Dec 5, 2019 11:34 PM By: Mahoning Matters staff 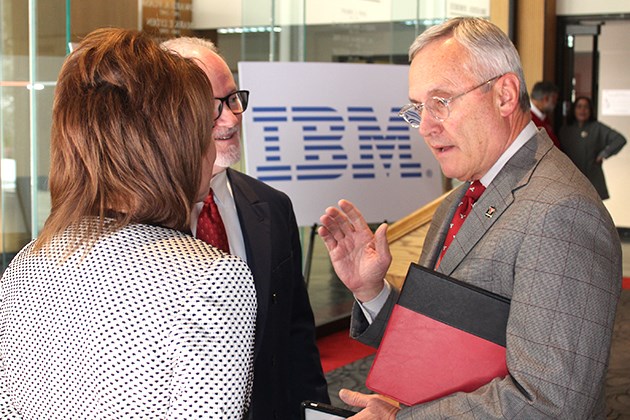 Youngstown State University President Jim Tressel, right, speaks with IBM's Timothy Wood, center, and Jennifer Oddo on Nov. 13 at the university's Tod Hall. Tressel and the YSU Board of Trustees agreed today to extend his contract for another year through June 2021.

YOUNGSTOWN — The Youngstown State University Board of Trustees and President Jim Tressel agreed today to extend Tressel’s contract for another year through June 2021.

“We are about to enter into a new strategic action plan, and while much has been accomplished, challenges remain,” Tressel said. “We are committed to further advancing student success and academic excellence for the benefit of our students and the entire community.”

Before being named president at YSU, Tressel spent two years as executive vice president for Student Success at the University of Akron. He previously was head football coach at Ohio State University from 2001 to 2010, where his teams won the national championship in 2002 and seven Big Ten championships, and appeared in eight BCS postseason bowl games. He was head football coach at YSU from 1986 to 2000, where his teams won four Division I-AA national championships. He also was executive director of athletics at YSU from 1994 to 2000.