Troopers, YPD cracking down on distracted driving along I-680

In four years, nearly 30 crashes along this portion of I-680 were caused by distracted drivers, according to the Ohio Department of Transportation.
Apr 24, 2021 12:04 PM By: Mahoning Matters staff 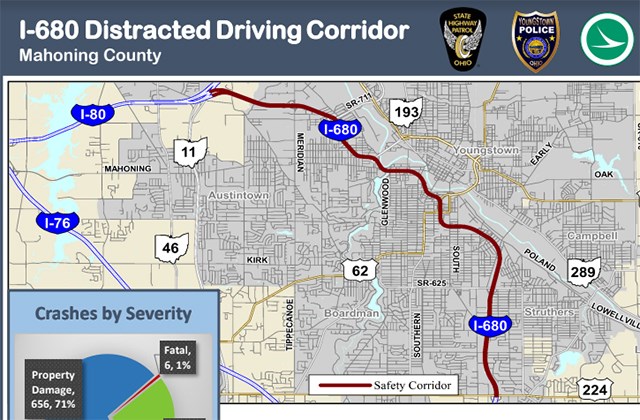 Shown here is a Distracted Driving Corridor now in effect along Interstate 680 between Lanterman Road and U.S. Route 224. Officials announced new signage and enhanced distracted driving enforcement along this 11-mile stretch during a Friday, April 23, 2021 briefing.(Ohio Department of Transportation)

CANFIELD — State authorities on Friday unveiled a new Distracted Driving Safety Corridor along an 11-mile stretch of Interstate 680, intended to discourage drivers from taking their eyes off the road and cut down on crashes.

The corridor extends from Lanterman Road and U.S. Route 224 through Youngstown, according to a release from the Ohio Department of Transportation. It will be marked by signage and patrolled more often by Ohio State Highway Patrol troopers and Youngstown police, starting Friday.

More than 900 crashes resulting in 263 injuries and six fatalities were reported between U.S. Route 224 and Interstate 80 from 2016 to 2020, according to ODOT. Of those crashes, 27 were caused by distracted drivers, according to ODOT.

"When you take your eyes off the road — even just for a few seconds — you are putting your life and the lives of others in danger," said Col. Richard Fambro, OSHP superintendent. "There is nothing more important than the safety of yourself, your passengers and other motorists — everything else can wait."

Between 2016 and 2020, more than 66,000 crashes statewide were caused by distracted drivers, including 195 fatal crashes that caused 212 deaths, according to ODOT.

"One of the top priorities for Gov. [Mike] DeWine and ODOT continues to be safety and improving Ohioans' quality of life," said ODOT Director Jack Marchbanks. "The distracted driving safety corridor we announced today reminds drivers to keep their hands on the wheel and their attention on the road — not on their phone."

Rabies vaccine-laden baits to be distributed in Mahoning County
Aug 1, 2021 6:15 AM

Hobby Lobby bought ancient stolen tablet with tale of Gilgamesh. The feds seized it
Aug 1, 2021 5:55 AM