The Gilmartin family of Austintown and the Cain family of Troy — both first-time adopters — on Friday, National Adoption Day, finalized adoptions for the newest members of their family. 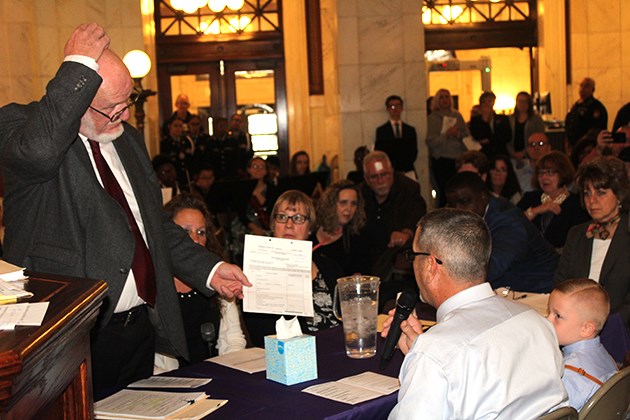 Youngstown attorney Robert Christian, left, hands a document to Dave Gilmartin of Austintown, who finalized his family's adoption of Jackson Gilmartin, 5, during a special ceremony Friday, Nov. 1, 2019 at the Mahoning County Courthouse.

“Jackson has thrived in [the Gilmartin] home,” agency adoption worker Elizabeth Kollar told Judge Rusu. “Immediately the family — many of them are here — welcomed him with open arms. … The agency recommends this adoption be granted.” 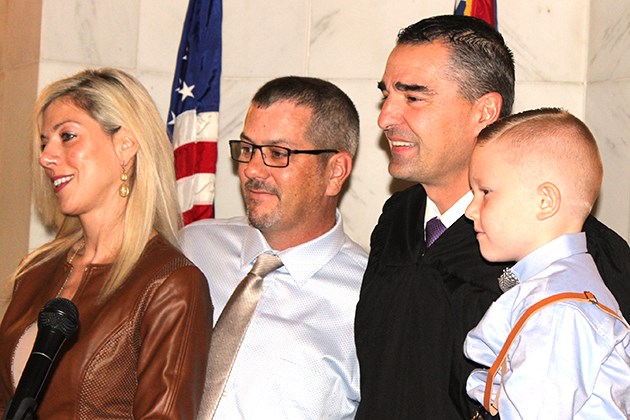 Tamara Gilmartin and her husband Dave first started fostering Jackson May 4. By May 29, their adoption was approved, Judge Rusu noted.

“As first-time parents at this age, the biggest adjustment is getting used to the complete upheaval of your own routines,” Tamara laughed. “You learn to loosen up and go with the flow.”

Tamara told Mahoning Matters she and her husband, both 45, expected to birth their own children. But Tamara’s cancer diagnosis and treatment — which made her unable to birth children — as well as their ages and later marriage meant “having our own biological children was not in the cards,” she said. 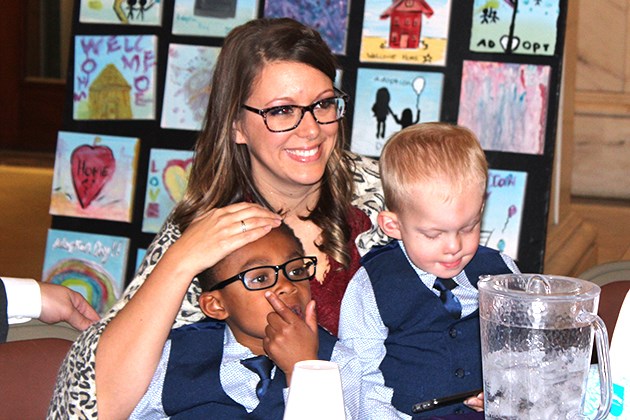 Amy Cain of Troy and her sons Nathan, 5 (left) and Tanner, 3, listen to Mahoning County Probate Court Judge Robert Rusu at a ceremony during which Cain finalized her family's adoption of Nathan Friday, Nov. 1, 2019 at the county courthouse.
Amy Cain, 29, said after her son Tanner, 3, was born with a genetic disorder, she and her husband Nate, 30, decided against having another child biologically.

They first started fostering their 5-year-old boy Sir — who, like Jackson, had been in state custody since infancy — after a sudden notice from the agency in late April. Amy said she scrambled to prepare the home in just 24 hours.

“He’s a very easy little boy to love,” Cain said. “He’s quite resilient. He is so loved by our whole family. My parents live five houses down. He loves that he can walk to grandma’s and get a snack.

“We have a large [extended] family and it’s like he has always been with us.”

With adoption paperwork came the chance for Sir to change his name. They went through dozens upon dozens before settling on the only one he liked: Nathan — and specifically not Nathan Jr., Amy laughed.

“He wanted to be like his dad,” she said. 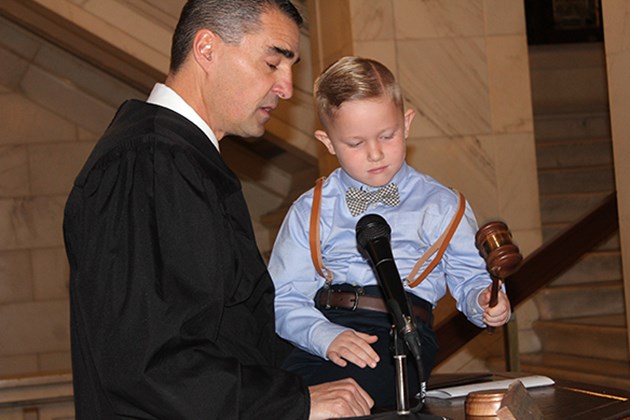 Mahoning County Probate Court Judge Robert Rusu, left, helps Jackson Gilmartin, 5, drop the gavel formally finalizing his adoption to the Gilmartin family of Austintown during a ceremony Friday, Nov. 1, 2019 at the Mahoning County Courthouse.
With a ceremonial knock of Judge Rusu’s gavel and the phrase “adoption granted” — each done by Jackson and Nathan, as is probate court tradition — the courthouse erupted in applause.

Randy Muth, Children Services executive director, said Friday though children in permanent state custody and awaiting adoption — currently there are 34 in Mahoning County — are there because of their parents’ circumstances are sometimes “damaged” and traumatized, “the good news is we can fix this.”

“A family opening their heart, their home — they are dedicated to making that child the single-biggest priority in their lives — is the best tool we have to mitigate or help these kids recover,” he said. “More that just recover — actually thrive.” 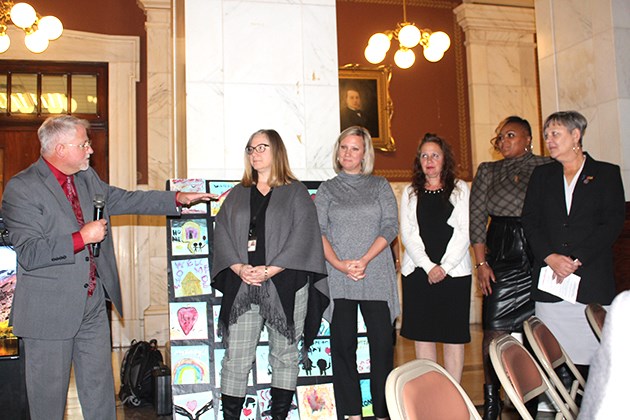 Theresa Pancoe, the agency’s adoption supervisor, said more than 300 total children are in the state’s custody. Though the agency has been “doing very well” matching up adoptive children with families, children may still wait, on average, two years to find their “forever home.”

Pancoe said she thinks some families shy away from the adoption process because of the perceived time or financial investments. The process to petition permanency could take six months to a year, she said.

Tamara said from foster care to Adoption Day was “two years of a lot of emotions, excitement” but said they were well-prepared by the agency for the ordeal.

“People think that it’s so expensive — ‘That’s why I can’t do it,’” Amy said. “It’s really not. There are resources out there for you. … It can be nearly free for you to do all this.

“If you open your heart to this, you just can’t go wrong,” she said. “If you want to be a parent and you love kids, this is just an awesome way to build your family and also help kids."