Johnson said states like Pennsylvania and others may have violated the Constitution, disregarded election laws or failed to count all legal ballots. Ryan said, "This futile attempt to overturn the election is the absolute most cynical thing I have seen in my 20 years in politics."
Jan 5, 2021 4:50 PM By: Mahoning Matters staff 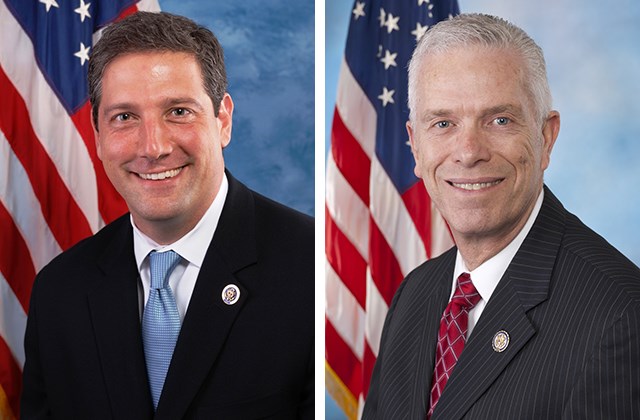 WASHINGTON — U.S. Rep. Bill Johnson of Marietta, R-6th, said he supports objections to the Wednesday certification of Electoral College votes in Pennsylvania and other states, for potential constitutional violations, or that they “disregarded” their own election laws or failed to count all legal ballots.

“The Democrats and their allies in the mainstream media hide behind bullying, spin and carefully crafted talking points to distract from this fact,” Johnson is quoted in a Tuesday release. “But most of the people I represent know the truth — that between the news media acting as the public relations department of the Democrat party, Big Tech’s big thumb on the social media and search results scales and credible allegations of election fraud in some states, many believe the 2020 election wasn’t fair.”

A group of 11 U.S. senators intend to reject electors from states whose election results have been disputed and is calling for an emergency audit of those states' election returns. The move would force a vote on the challenges in the House and Senate.

U.S. Sen. Rob Portman of Cincinatti, R-Ohio, however, has announced he intends to vote to certify President-elect Joe Biden's win, according to The Center Square.

On Wednesday, I will support objections to the certification of the Electoral College vote of Pennsylvania, and possibly other states on grounds that they: potentially violated the U.S. Constitution; disregarded their own state election laws; and/or failed to count all legal ballots. The Democrats and their allies in the mainstream media hide behind bullying, spin, and carefully crafted talking points to distract from this fact. But most of the people I represent know the truth – that between the news media acting as the public relations department of the Democrat party, Big Tech’s big thumb on the social media and search results scales, and credible allegations of election fraud in some states, many believe the 2020 election wasn’t fair.

In 2005, former President Jimmy Carter and former Secretary of State James Baker co-chaired a bipartisan commission on election reform. Their official report stated that mail-in voting 'remains the largest source of potential voter fraud.' Given that 2020 saw more mail-in voting than anytime in American history, it’s no surprise that there are hundreds of sworn affidavits that point to instances of potential fraud and election irregularities. While some courts have reviewed these allegations, many dismissed them on a partisan basis. The most egregious of these was in Pennsylvania – led by a liberal Democrat governor, a liberal Democrat Attorney General and liberal Democrats on the state supreme court. Despite the fact that Article VII Section 14 of the Pennsylvania Constitution does not permit mass mail-in voting, Pennsylvania officials allowed it anyway.

I don’t expect that this effort to scrutinize the parts of our election system that have the greatest potential for fraud — and the least amount of voter trust — will change the ultimate outcome of the 2020 presidential election. But I was elected to do the right thing for our Constitution and for our nation. Simply rubber stamping these slipshod and partisan-laced electoral outcomes is wrong.

I’m not interested in hearing lectures from Democrats after they’ve objected to the certification of every Republican presidential win this century. Following the 2016 election, multiple House Democrats attempted to object to the electoral votes from several states. There was even a concerted effort to persuade individual electors to switch sides. The left and their cheerleaders in the mainstream national media lauded this effort. Democrats did the same after the 2000 and 2004 elections, with a senator joining the effort in the 2004 instance.

So, the Democrats and their media allies are lying when they say this week’s electoral vote challenge is unprecedented, or that it undermines our democracy. By definition, no one who is following constitutional procedures and federal law can be credibly described as undermining democracy. Politicians who advocate for the tearing down of historical statues, attempt to abolish the police, and allow violent criminals to victimize law-abiding Americans unchecked -- these are the people who are undermining democracy. I am also not swayed by the cries of “undermining democracy” from the same people who spent the last four-plus years actively sabotaging and undermining a duly-elected president with false allegations and unprecedented media bias.

Even a stopped clock is right twice a day. Which is why I can say that, in 2005, even Nancy Pelosi was right when she made this statement on the floor of the U.S. House as George W. Bush’s victory was being challenged through the same process that will play out in Congress this week:

'Today we are witnessing democracy at work. This isn’t as some of our Republican colleagues have referred to it, sadly, as frivolous. This debate is fundamental to our democracy. The representatives of the American people in this house are standing up for three fundamental American beliefs: The right to vote is sacred; that a representative has a duty to represent his or her constituents; and that the rule of law is the hallmark of our nation.' - Nancy Pelosi, January 6, 2005.

I do not take this action lightly, and I take no comfort in it. And, despite some of the liberal news media spin, very few people want to overthrow the results of a legitimate presidential election. But a majority of Americans — including me — want to ensure the integrity of future presidential elections. The Constitution gives Congress a role to play in this regard and I intend to do my constitutional duty.

Meanwhile, U.S. Rep. Tim Ryan of Howland, D-13th, on Tuesday pushed back against the election challenges.

“President Trump and Congressional Republicans’ efforts to overturn the results of a free and fair election are an attack on the most fundamental pillar of our democracy that has made our nation what it is over the last 200 years: the right to vote," he's quoted in a Tuesday release. "This futile attempt to overturn the election is the absolute most cynical thing I have seen in my 20 years in politics.

“In the coming days, we will continue to see those who have chosen to undermine our democracy beat their chests on cable news in an appeal to their most extreme base — but this is only political theater. While these cynical actions will make headlines, they will not change the results of the election," he continued. "The will of the people has been heard. Congress will certify the election results and on Jan. 20, Joe Biden will be sworn in as the next President of the United States. It is then that we will begin the process of healing the country and putting forth an agenda that will take care of the needs of America’s working people and their families.”